Into the Abyss brings the promise of significant advancements as capsuleers gain access to Triglavian weapons platforms, ship designs, and biotechnologies like mutaplasmids. While we do not yet have any firm information or devblogs from CCP, I wanted to get a closer look at what these advancements might hold. So I loaded up a Sacrilege, shifted over to Singularity, and went Singularity diving into A-space in search of the mysterious mutaplasmid.

I decided to go with a Sacrilege as the platform has a high resists profile, can run cap stable with reps running, has decent EHP, and is capable of dishing out over 600 dps with drones and heavy missiles. The combination of heavy missiles and drones grants good damage projection, and a medium smartbomb is good for clearing large numbers of light rogue drones when they get too close. 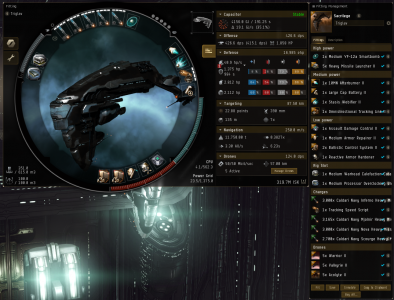 I was able to run this fit quite effectively through level ones and twos with little difficulty. My average time through sites consistently came in under ten minutes. I ran into problems clearing level threes in this fit as the high number of small drones and the tank of the battleship spawns made it challenging.

It isn’t my desired fit; the absence of readily available faction modules on Singularity meant I wasn’t running with the medium faction smartbomb and two C3-X ‘Hivaa Saitsuo’ Ballistic Control Systems I would normally run on this ship – modules that greatly increase efficiency.

Good alternates to the Sacrilege are the Ishtar, Gila, Eagle, Cerberus, Muninn, and Huginn. I also suspect that just the basic Rupture might be able to handle these sites capably, but the Muninn’s tracking bonus adds a sizable advantage against the small drones. The Stratios is also a strong contender.

The results of my first three runs through A-space were quite promising. I received a filament, five mutaplasmids, and blueprint copies for both a Demavik and Vedmak. Of course, this is on Singularity. I expect that the returns on Tranquility will reduced. My guess is, we’ll see approximately a third of their current return, both in terms of drop rate and drop rarity. 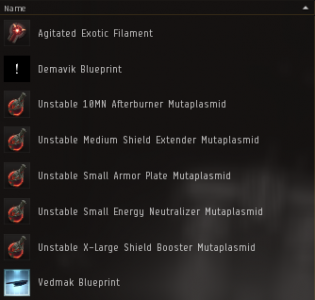 During my third run (a level 3) I died only seconds away from the final gate. In my hold were another four mutaplasmids, another Vedmak BPC, and a BPC for a medium disintegrator.

An interesting aside is that the sites (on Singularity at least) do not appear to be uniquely instanced. In the first room of the level 3 I ran, I discovered the wreck and corpse of another capsuleer.

He had also been flying a Sacrilege, with a fit very similar to my own, though we have never corresponded. I do not know whether or not these sites will continue to be non-exclusive instances. For now, I hope that this will be the case. I’m excited by the chance of engaging in some impromptu PVP in a tightly constrained space. It certainly increases the chances of a payday.

Most people haven’t tried playing with these on Singularity yet. So let me break down the basics of using mutaplasmids and what it means for you. These are examples from an extremely limited sample. It also doesn’t factor for faction modules, if they can even be modified. 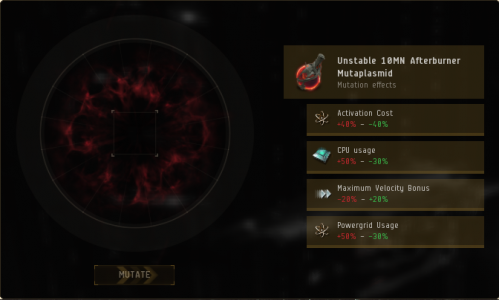 To take it to the next level you need the right type of module to produce anything of worth. Which type is included in the mutaplasmid’s name. You won’t know the absolute range of improvement or degradation until you plug in the right type of module. Once you do, though, you can’t go back, so it’s definitely a gamble. One thing I can say is: meta grade matters. Better mods get you better improvement—if and when chance swings in your favor. 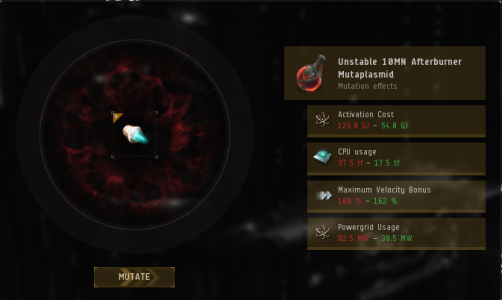 You stand to see improvements or significant reductions in the module stats. Unlike faction, T2, deadspace, and officer modules there is no clear progression with the mutaplasmids in terms of results. Different mutaplasmids offer higher risk/reward potential, but no guarantees. An Abyssal module, once created, can be several orders of magnitude better than T1. It can also end up much worse.

In short, mutaplasmids are not—contrary to some opinions—an ‘instant win’ button. What they offer is the ability to find even more niche adaptability in EVE Online. If you need an over-sized afterburner for a fit, but you’re over on power grid, use a mutaplasmid. There is the potential to see a power grid fitting requirement well below even the compact AB. Of course, it might mean a slightly higher CPU requirement, or a percentile reduction in maximum velocity. And make sure you have modules to spare.

Conversely, if you have fitting room to spare and want to really crank things up? Throw a mutaplasmid on a prop mod. See how much faster you can go. Think of mutaplasmids like you’d think of messing with a car’s engine; you’re not replacing the A-type motor out of an 86 Nissan with that of a Mustang. You’re just giving it some NOS. Just acknowledge it might explode in your face.

Because this is already running a little long, I’ll summarize the results of my experimentation. Here’s a list, with links to the comparison images: