Eagle eyed players in The Forge, and visitors to reddit will have noticed that there is a Keepstar currently sitting in Maila. The Keepstar has gone up under the banner of Care for Kids, and has raised many questions, some of which this article will try to answer. 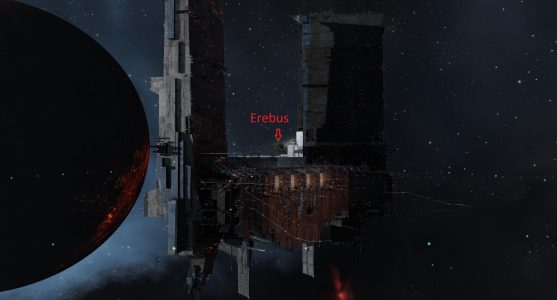 Maila Keepstar, with Erebus for scale (Image from Kenneth Feld)

A lot of people have not heard of Care for kids before, so, below is a summary of the charity, how it started and how it works in-game. For more info, there was a presentation at Fanfest.

Care for Kids is a charity which provides in-game packages for teens and young adults (13-25 is the main age range) who are in recovery centres in hospitals while receiving treatment for cancer, or while having treatments such as dialysis while waiting for transplants. It was started by C4W3 while he was in a recovery center in Sweden with kidney failure related to diabetes. He was on a waiting list for a kidney transplant, and so was spending a lot of time in the hospital. He installed Eve on one of the PCs  available in the hospital, and noticed on a later visit that the Eve client had been updated, which meant someone else was playing it.

He posted flyers around the recovery center to see if there was any interest from the patients in playing Eve, and people started coming to play. The patients in the recovery center have around 4-6 hours per week that they are able to play games, so Eve fits in perfectly with this limited time. C4W3 and some of his friends started providing “Care Packages” for patients who wanted to play Eve, including items such as PLEX, some starting ISK, modules, and ships.

The project expanded as local businesses began to ask if they could be involved, providing seasonal gifts such as Easter eggs and Christmas presents.

At present, there are 592 young people playing Eve through Care for Kids, and of these, 182 are self-sufficient, PLEXing their own accounts via their own ingame activities.

So, why on earth have these guys decided to drop a citadel in Lowsec, and what is going on with it?

I hopped onto their TS server to ask C4W3 some questions about the citadel, and his replies are found below:

Can you explain how you came to put up a citadel, and why you decided to put one up in lowsec for super trading with profits going to Care for Kids?

I am real life friends with Ironbank, who is part of I Want Isk (IWI), and at that time, they were one of the biggest sponsors of Care for Kids. I mentioned to him that I thought it would be a great idea for Care for Kids to build a lowsec Keepstar, and he said he could help with that.  Once he had agreed, our other friends Shut up and shave (SUAS), and LennyKravitz2 agreed to be part of it.

While we were organising this, it was only this small group that knew about it, and some of the young people from Care for Kids along with other friends of ours mined, and collected components all over Eve, to try and make as small as possible an impact on the market so that people would not notice what we were doing.

C4W3: Ironbank, as I mentioned, is one of my real life friends, and I consider him one of my best friends in game, and he is super rich ingame, so he has been involved since the beginning of Care for Kids, providing care packages, and with his extensive knowledge of the markets, being a mentor for any of the young people who want to try trading, so he has been involved from the very beginning of the citadel project.

Having said that, we haven’t ever associated Care for Kids with Ironbank or IWI. SUAS, Ironbank and LennyKravitz2 have remained in the background and have not been mentioned in relation to Care for kids.  We are a stand alone entity, and it does not matter if our help comes from Goonswarm Federation, CO2, or anyone else.  Our sole purpose is to provide content for the young people, regardless of where the help comes from. Our sponsors and donors come from all kinds of places, early on in the project, some of our biggest donors were from Karmafleet, they donated a lot of isk to get the project up and running.

With regards to the actual citadel itself, Ironbank provided the fittings, fuel, and helped sort out the logistics of moving the items from Jita to the citadel.  The blueprint was provided by LennyKravitz2, and, as I mentioned before, the materials and components to build the hull were provided by the young people in the project, and our friends.  One of the things to understand is that we help the young people who join through Care for Kids to find their own path in Eve.  Some of them join Goons, some join Horde, we don’t push them into one particular path or another, and some of them wanted to get involved in helping with the citadel, they wanted to help with jump freightering, or with mining or otherwise gathering materials.

Ironbank is not involved at all in the day-to-day running of the citadel. This is being run by a holding corp, with myself and a small group of trusted ingame friends.

How does the charity side of the citadel work?

C4W3: The income from the citadel, the broker fees, gets sent back to the Care for Kids main corp, where it gets spent mostly on the care packages I mentioned earlier. We also do events through Care for Kids, for example, we have an incursion event coming up soon, being led by people from both Goons and PL.

You have mentioned PL, one of the concerns people have raised is that you are a Pandemic Legion member, so, can you tell us what, if any, involvement in the citadel either PL or other members of the MBC have?

C4W3: I am a member of PL, yes, but the involvement of PL has been limited, they helped with erecting the citadel, provided a protection fleet during the transportation.  I asked MBC to protect it while it was going live, but besides that I do not think any members have any interest in the citadel.  I have certainly not been approached by, nor taken part in any discussions with, PL regarding them using the citadel for anything.

At the end of the day, hunting supers and titans can be done easily by using dotlan and calculating jump points, and the citadel has an extremely large docking range (186km), so, I do not feel that getting in and out of the citadel safely is an issue.

I am very careful when doing Care for Kids stuff to not mix up entities, to give the impression that they are affiliated, whether that be PL or Goons or anyone else, I always ask if it is alright if I use an individual’s name in a promotion if they have donated or sponsored something.

One of the other criticisms has been the location of the citadel.  What made you choose Maila as a location for the Keepstar?

C4W3: Maila is part of something much larger when it comes to future plans, and the location was picked because it is close to three regions, which makes our future decisions simpler.  I cannot say too much at the moment, but, if people stay tuned, they will see something happening soon!

Now that the citadel has been up for a few weeks, can you tell us how it is going, compared to your initial expectations?  I know of one super that has been sold through the citadel, have there been any others?

C4W3:So far there has been 1 Nyx, 1 Wyvern, 2 Hels and 1 Erebus sold through the citadel.  A lot of people are nervous about using the market, but, it is always dangerous moving supers, and my main goal is to have something which makes it simpler for players to trade titans etc, and having Care for Kids be part of it is something that I personally feel is amazing.

I have been surprised by how much random traffic we have had.  I am seeing more random, unaffiliated people coming forward and saying “I have this super that I have been wanting to sell, and the account it is on has been unsubbed, and now that the market is available I want to try and sell it”, so they are putting them on the market now that they do not need to organise the whole third party thing to sell it.

We have also had general trading, we have people coming in from the Drone Regions trading minerals etc, and we have a big jump freighter network coming to and from the citadel with Red Frog which was something that I was not expecting.

Have there been any attacks on the citadel during its vulnerability period?

C4W3:No, there have not been so far.  One of the things to understand about a Keepstar is that it has tremendous firepower with the 8 high slots, all the weaponry available to a Keepstar outside of highsec, as well as incredibly long range, for example, the point defense batteries go 21.5km beyond the docking range, which is 186km, so you are talking about a range for those of over 200km.

This is not to say that it cannot be attacked of course, but it would take a very large alliance to attack the keepstar during its three vulnerability periods we have for it during the week.

Do you think that citadels will replace third parties for super trades?

I think over time we will see more citadels being anchored for this purpose, alliances who have a main focus on caps and upwards, may want to have a keepstar to enable easy buying and selling of caps internally, as well as a place to keep them.  When CCP finally bring in the bumping immunity in the docking range, this option will become even more attractive, but, with the huge docking range of Keepstars, moving a super in and out is not extremely difficult.

I would like to thank C4W3 for taking the time to talk to me, and John Selth for putting me in touch with C4W3, and Kenneth Feld for providing the images of the citadel.