The controversial advent of dailies in EVE Online, first introduced by CCP Rise in late April 2016, saw the typical crowds of vocal EVE players respond with treatises and dissertations on the usual fan sites and the EVE subreddit about how and why it was a bad idea. The idea of a “daily quest” that rewarded skill points (EVE Online’s equivalent to XP in other games) was seen as a tilting of the game towards other, more popular/profitable MMOs – a path that may EVE Online players would desperately prefer that CCP avoid traveling down with EVE. Meanwhile, the meek voices of those who thought it was a good idea responded that it could be a good thing if iterated on properly. The rest of the player base shrugged.

Once the feature was implemented in the game, a fairly substantial portion of the player base seemed to either ignore it or continue not logging in. It’s probably safe to assume that the feature failed to significantly impact login numbers. In fact, CCP Rise confirmed just this week that the feature did increase engagement as hoped and announced the removal of the feature altogether. 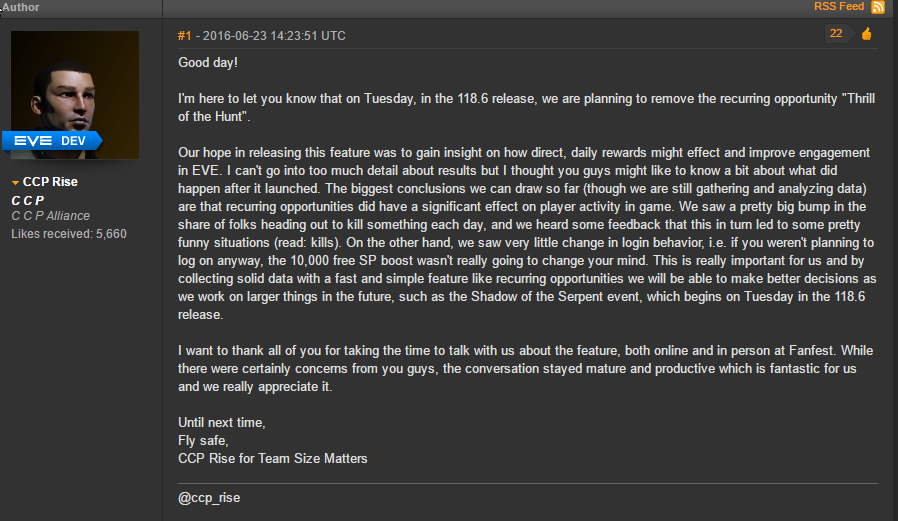 CCP Rise indicated that the recurring opportunity had been put in as means of collecting data. While no specific reason was given for the removal, the implication is that data collection has been completed. Additionally, the lack of increased logins gave CCP no reason to retain the dailies in this current form. As Rise indicated, the generic recurring opportunity’s removal is occuring at the same time as the release of the new Shadow of the Serpentis event, which shows some evidence of having a daily element as well.

Unlisted in the reason for canning this feature, and perhaps more importantly, is the ability of players to farm their daily SP mission for 10,000 SP, adding additional 300,000 SP a month, and then using that to turn into skill injectors for Plex (the coveted certificate that lets EVE players do things like pay for their account with in-game money. So, farming dailies, coupled with the rate of SP acquisition, a player can essentially farm their own SP, sell it on the market for skill injectors, and then use that money to Plex their account. Thus resulting in an already more inflated SP market that subsequently causes the cost of Plex to rise ever higher.

For those who have been paying attention to CCP for the last few years, this iterating and evolution of feature concepts comes as no surprise. Ideas that are not fully developed often receive critical feedback, leading CCP to nix them (remember Industry Teams?). Even if the ideas themselves aren’t bad, execution is everything and it is the execution that so often frustrates players, and requires tweaking (such as the Jump Fatigue hard cap). Often, this poor implementation itself can affect login count. As a result, CCP’s attention to those numbers in this current round of data collection is unsurprising, especially as PCU count continues to trend downward. When, and at what cost will CCP Games discover that the right hand does not know what the left hand is doing? 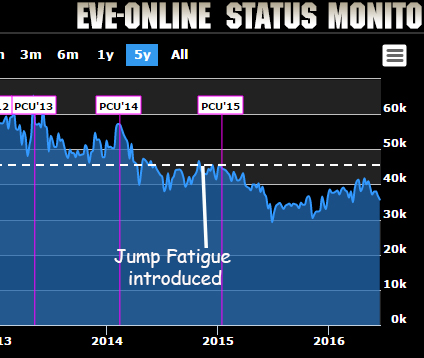