Sundered is an indie Metroidvania developed by Thunder Lotus, which also made Jotun—a game you should definitively check out. With stunning graphics supported by solid audio, Sundered will take you on a journey to discover the story of the war between the Valkyries, a technologically advanced human civilization, and Eschaton cultists, strange beings believing in old gods.

Playing as Eshes, a young woman, you are taken inside this strange world and try to escape it. Guided by the Shining Trapezohedron, who will lend you some of his powers, you will explore three zones, finding various upgrades and tools to progress, in a pure Metroidvania style. 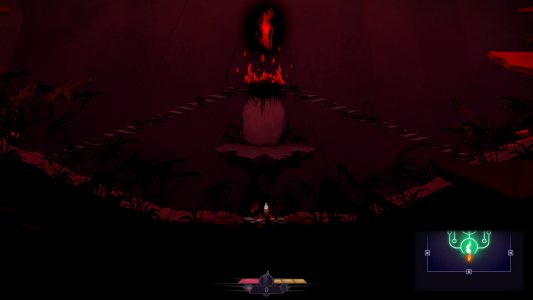 The Shining Trapezohedron tells you its story at the rhythm of your discoveries. You will also be offered to gain more of its powers by bringing ancient shards, found on bosses and mini-bosses, to altars. But this comes at the cost of your humanity, of course, as he slowly turns you into some kind of hybrid… Do you want to get out of this as human or not? There is also a plant where you could destroy those shards, winning some lesser abilities but remaining human… The choice is yours, and will bring you different sides of the story and influence the end of the game. As the devs say: Resist or Embrace. 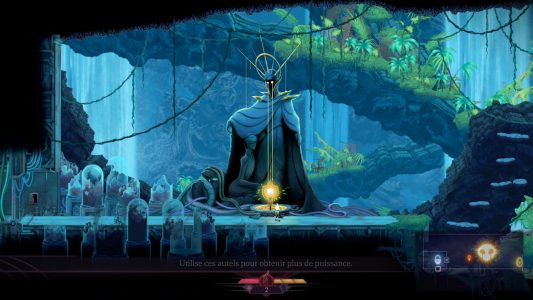 On the presentation side, the game is hand-drawn, which gives really stunning visuals. Every animation is smooth and detailed, and the background often had me stop just to watch it a few seconds… before running again to flee an enormous horde of monsters! It also seems to be very easy to run, as my laptop with integrated graphics could run it with all details in HD. The audio and ambiance in general are also excellent, creating a stressful environment without overdoing it.

A nice addition to classical Metroidvania gameplay, taken from the rogue-like family, is the fact that the map will change each time you die. This is limited to “empty” rooms; bosses and objective remaining at the same location. We then have a game where dying is not really an issue, as all loot is preserved. This is good, as you will often die. Sundered is hard, in a good way.

The map-reset system is interesting, in terms of gameplay, but causes long loading times each time you die and when changing zones.…  During the 15 hours or so I played before writing this review, I also found one bug where a corridor would lead to the inside of a wall. 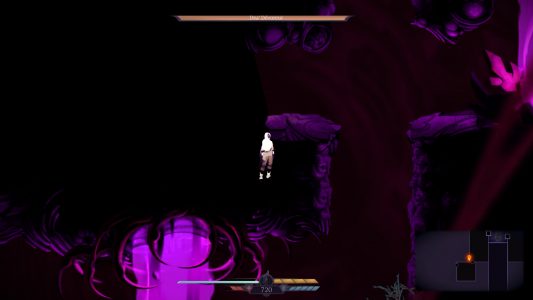 It seems I am in the wall…

Another interesting mechanic concerns combat. There are no fixed position for enemies. Instead, enemies will randomly spawn in small groups and attack you in ‘hordes’. At random intervals, larger groups will attack you for a longer duration. These bigger hordes are announced by alarms or gongs (depending on your position), and will often be challenging to defeat. Never forget: running is an option!

All monster will drop what can be seen as a mix between XP and money, allowing you to upgrade a skill-tree in a pure rogue-like fashion. You also have to choose up to three talents. These talents are found after defeating elite enemies (called ‘lith in the game), mini-bosses, bosses, or in hidden treasure chests. Each talent gives you a huge bonus and a malus, and exist in three different levels with a better bonus for each. 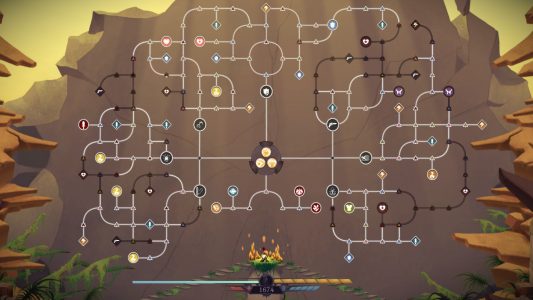 My skill-tree after 12 hours of gameplay, still missing some abilities

While combat is the main source of difficulty for the first five hours of gameplay or so, the game unveils another of its qualities in the last zone: it is also a good platformer. With various upgrades giving you Metroidvania staples like dashes, wall climb and the ability to wall-jump, the displacements are varied and perfect for a good platformer gameplay.

And this brings me to maybe the most annoying thing in this game as far as I am concerned: the grappling hook. The grappling hook, a throwback to the classics, grabbing the nearest thing in the direction you are “looking”. The problem is: there is no aiming, as there is no mouse to use. If it works well using a pad, as the joystick allows you to “point” where you want to grab, but using a keyboard gives terrible precision. And since the grappling hook also attaches to enemies, I let you imagine how platformer levels can become hardcore if a horde decides to come and mess with you.

Sundered is an excellent game for both lovers of Metroidvania games and people that want to discover this style of games. Technically awesome, using classical but well implemented gameplay mechanics, you will find it to be a very solid game. Played in hard mode, the difficulty will remind you some of these older games you would need an awful lot of tries to finally end. While this might scare newer players, I personally consider it as a plus. You should account for over 12 hours to finish a first run, without exploring and maxing everything. And do not forget that more than one ending exists!

Playable on small laptops, this could very well become your travel game, as very short gameplay sessions are totally possible (I never stayed alive more than 1 hour in a row).

Sundered’s solid audio and visual design, hard-yet-fun level of difficulty, and intriguing world left me wanting more. If you like Metroidvania games and strange new worlds, you should check it out.