Welcome back to The Drafting Table. This time, we take a look at a solo sov warrior. The pride of the Federation Navy takes center stage as the Comet gets its entosis on.

At the commencement of the Imperium’s northern campaign, I came across a post on the goonfleet forums about a solo entosis Imperial Navy Slicer. The originator of the fit had gotten some favorable results and was really excited about it. I looked at it and thought it would be really fun, until I looked at the stats with my level of Amarr frigate. While still looking good, it was clearly less capable. With that in mind, I set out to adapt the fit to another Navy hull, and the Comet ended up on top.

The Slicer fit in question. I’ve lost the origin of it, please let me know if you know the original source.

The Comet is a Gallente Frigate and is one of two Gallente Navy ships available in that size. The Comet is the combat ship of the duo, and has a fearsome reputation as a solo ship. For each level of Gallente Frigate, the Comet gets a 20% bonus to Small Hybrid Turret damage and a 7.5% bonus to Small Hybrid Turret tracking speed. This means its guns hit hard and accurately, a benefit to both short range blasters and the longer range railguns.

High Slots Three (Two Turret Hardpoints): While only able to fit two guns, the bonus of the Comet makes Small Hybrids the system of choice. For this fit I chose 150mm Railgun II. The good combination of range and damage, with the help from the tracking speed bonus, makes these the ideal weapon systems. The utility slot is taken up by an Entosis Link I. Used to reenforce sovereignty structures like Infrastructure Hubs, this allows the Comet to be a pest to the owners of a null sec system.

Mid Slots (3): The mid slot layout is relatively straightforward. First is a 5mn Microwarpdrive II. Combined with some of the other mods used later, this pushes the Comet to over 3.8km/s. Next is a Warp Disruptor II. While not the primary goal of the fit, this does allow for the Comet to keep hostiles on the grid and in gun range. The last slot contains an Optical Compact Tracking Computer. Able to help with application and range, it makes the railguns apply damage better.

Low Slots (4): The first low utilizes a Small Ancillary Armor Repairer. While the rest of this fit is geared to being able to disengage rather than absorb damage, this helps ensure that a couple glancing hits don’t destroy the ship. Next are two Vortex Compact Magnetic Field Stabilizers. These increase the DPS and volley damage of the 150mm railguns, providing more punch to dissuade pursuing ships. The last slot is occupied by a Nanofiber Internal Structure II. Providing both an increase in speed and agility, the nanofiber is a powerful tool to make the Comet even faster.

Rigs (3): Each rig slot has a dedicated purpose on this fit. First is a Small Ancillary Current Router. This provides the necessary boost in powergrid necessary to online the rest of the fit. Next is a Small Semiconductor Memory Cell I, which provides a small, but critical boost to the capacitor. Last is a Small Polycarbon Engine Housing I, which like the Nanofiber increases the speed and agility of the Comet.

Drones (30m3, 15mbit Bandwidth): The Comet can utilize three light drones with a backup flight. With railguns dealing a combination of Kinetic and Thermal damage, ether Warrior II (Explosive) or Acolyte II (Electromagnetic) are good choices. Given that this fit will likely end up sparring with Interceptors, which are commonly shield tanked, I chose to take a full bay of Acolytes.

Bling: The best place to throw additional money at this fit is the Entosis Link. Upgrading to the Pandemic SPHERE Modified version increases the range of the link by 5km. It may not seem like much, but this does increase the flexibility and disengagement abilities of the fit. This comes at a rather steep jump in cost relative to the hull, but if you can afford it the improvement is noticeable. Additional improvements in speed via deadspace Microwarpdrives or improved Nanofiber/Polycarbon choices will also help. Keep in mind that these improvements push the cost of this fit up closer to more capable solo entosis ships like Recons.

Implants and Boosters: As with all ships that rely on speed, the Snake set is your best friend here. While due to cost I would not advocate for buying a set just for this, if you happen to have a set already it can be quite useful. Other implants that improve speed, such as the HS-90X or Zor’s Custom Navigation Link are also good choices. On the booster side, Quafe Zero with its speed boost is a nice choice.

This is a fit designed for solo entosis work while being able to disengage from almost any threat. Begin by orbiting the structure you are going to entosis at 20km. Turn on your MWD and start your Entosis Link. You will be required to be on grid for one warmup cycle (5 min with the T1 Link) plus however long it will take to hack the structure. This depends on the ADM of the system. Once the hack is finished, you will not be able to leave grid until the link cycles down. Aline off in a random direction or to a safe and wait out the cycle. Leave grid when able.

If you are attacked, you should attempt to disengage and then engage any opponents trying to chase you down. If the hostiles are coming in small stuff, like other frigates, interceptors, or destroyers; accelerate away from them in a straight line. You should be able to outrun all but the fastest interceptors or a very blingy frigate. Engage these with your guns and drones. Use the Warp Disruptor to keep them from warping out without having to decelerate if they are in range to do so. If larger ships with good range, such as an Omen Navy Issue, show up, be careful not to fly perpendicular to them until you are out of effective range of their guns.

Two things will get this ship killed. The first is Warp Scramblers. These shut off your MWD, which given how much of the fit is devoted to wringing every bit of speed out of the hull means losing it is a death sentence. The second is cruisers with good long range weapons, such as  RLML Caracal or Omen Navy Issue. These can make getting out of gun range difficult without sustaining fatal damage. Both of these can be mitigated by good situational awareness.

The most interesting encounter I had while out with this fit was with a Bifrost. While it was short, it was a rare good instance of manual piloting for me. Like other Command Destroyers, the Bifrost can fit a Micro Jump Field Generator. Much like the Micro Jump Drives found on Battleships and Battlecruisers, the MJFG teleports the equipped ship 100km along its current heading after a spool-up period. It also takes any ships within 6km along with it. This Bifrost was alone, but adding additional ships would have made this a little more interesting. After aligning at me, the pilot activated the MJFG. This placed the Bifrost in front of me. Fortunately for my Comet, he landed a little far away and was unable to scram me before I changed course and burned to safety. As with all kiting ships, it takes good situational awareness that becomes more difficult with an increased number of opponents to keep this ship alive.

Other than the encounter with the Bifrost, I had a couple small skirmishes with a Claw, and got obliterated by a Omen Navy Issue. For the most part, I was left alone to reenforce various sov structures in both Tribute and Vale of the Silent.

After having the chance to try this fit in a couple combat scenarios, I don’t think I would make any fundamental changes. The fit performed well in the intended goal and was able to hold its own against similar size combatants. However, I would heavily recommend the Pandemic SPHERE Modified Entosis Link if it is within your capability to afford such. One of the more notable weaknesses of the fit is how close it needs to stay to keep the link active. It means a ship with good damage projection knows it will have you within an envelope. The upgraded link provides a little more flexibility that can make the first move in combat a winning one.

While I know first hand that entosis work is not exactly the most stimulating activity out there, I enjoyed the change of pace the Hackerman Comet over a slow brick-tanked Industrial. Got any ships you enjoy using on the solo sov grind? Figured out the perfect way to kill this thing? Let me know in the comments, and see you next time. 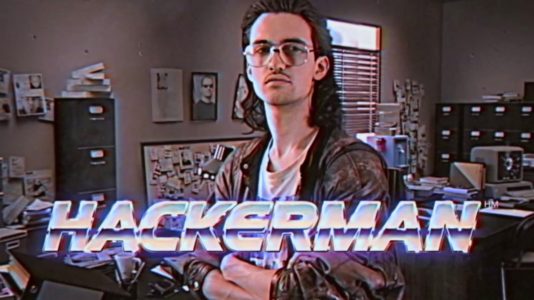 What? You seriously thought I was not going to use this?