In Star Control: Origins, you become Earth’s only hope to avoid impending doom from an alien race.

Your goal: to take the only interstellar ship humanity possesses, and search out extraterrestrial allies in a fight to save the world and the universe as a whole.

Straight out of the gate, the game setting refuses to take itself seriously – the ‘aliens trying to kill you’ aspect is very absent, and the game often makes jokes about how ‘we spent all of our last resources putting you in this ship, so please don’t lose it, thanks.’ By not following such sci-fi tropes, it creates a fun and engaging game with an interesting storyline. Combine this storyline with a host of allies and special characters, ranging from squids joking about the genocide of fish to an alien race that breaks the fourth wall by disparaging the human form, and in my book you’re onto a winner.

One of the early aspects that you need to understand is that, even as you’re presented with a choice of different dialogue options, the game is fundamentally an adventure game and not an RPG. I often found the choices I made with dialogue had little impact on my gameplay, and there weren’t many repercussions for what I picked; There was often only one outcome. In fact, there was often no way I could ever talk myself out of a fight or try to intimidate my opponents. You were on a linear path with the illusion of choice, and while this is fundamentally not a bad thing, it should absolutely be kept in mind when playing a game like this, where initially you might believe your interactions have a serious impact. On the subject of dialogue, though, characters from all the alien races felt different in their own unique way—I felt that they were fleshed out and there was a comical element underlining the entire game. Again, despite the restrictive dialogue, the experience never seems to take itself seriously. 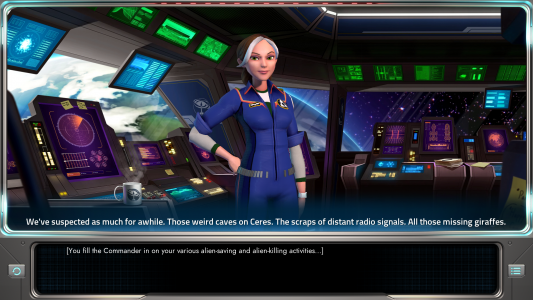 The game is built in a giant universe with thousands of planets to explore- it has moons from which you collect resources, and alien races to make contact with. While the ship that you start off with is very basic, you’re able to upgrade it through a system of gathering materials, however there is no crafting system. Instead you collect resources to sell back to NPCs for credit and you then spend those credits to buy upgrades. This is a noticeable issue, allowing you to simply gather all materials and sell them rather than having to hunt specific materials for your upgrades and making general progression easy and less engaging, though it does create far less of a simple grind for upgrade items.

During storyline gameplay, I found a large collection of aliens that want to shoot you, and you can shoot them back in your encounters with hostile fleets. This aspect takes part in the top down 2D-arcade-style arena where you fly your ship around a gravity well and duel your opponent. This is a main part of the game, but it has its flaws. During the story, you’ll often find yourself getting chipped away at your hit-points, which don’t recover after each battle, and require a trip back to Earth to fix. I often found myself trundling along from system to system getting picked on by hostiles and needing to to stop and get upgrades for the ship by grinding out resources. 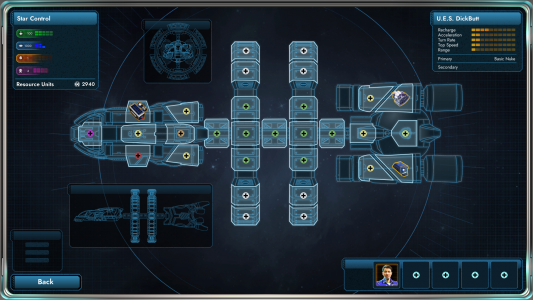 One of the most impressive and cool features of the game has to be the fleet fighter, though. This mechanic allows you to simply jump into an engagement fight—either local or via a multiplayer matchmaker—where you fight another fleet one-on-one. You can choose from a collection of ships, and even utilise custom-built collections from inside the game to allow players to take on flights in the best way possible.

Really, this is a a huge game world with significant customisation options available. It is very easy to foresee expansions into new systems, with additional ships and planets as well. However, this seems likely to come in the form of DLC or player-built mods.

Ultimately, the game is very enjoyable from an action-based adventure perspective, with callback elements to the previous Star Control games. However, the constant resource grind hinders the enjoyment a little, and interrupts the flow of flying around shooting at aliens, getting shot at, and upgrading your ship. That said, the game itself is not very taxing, and you could play the game quite passionately on the side if your attention is spread between different applications—this could be great for the people looking for a game to play while they play other games.