It’s been over a year since INN last covered Chris Roberts’ Star Citizen, a historic funding and game development simulator that allows players to spend real money while roleplaying as vaporware publishers. For the most part, Star Citizen doesn’t fit with our subject matter, as INN focuses mostly on games that exist. Not much has changed since our last report; none of the announcements from the 2016 holiday livestream reflected anything resembling reality. But this week, Star Citizen made headlines in Eve circles with the release of information on its new salvaging ship, the VentureVulture. 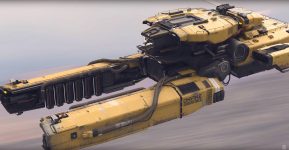 Eve Online players will immediately recognize the ship as closely resembling the Venture, an ORE industrial frigate first released (into the actual game, not just as a concept) in 2012. CCP Games even recognized it, tweeting about it on Thursday following CIG’s announcement.

They say that imitation is the sincerest form of flattery ?

But CIG’s troubled community has not made its reputation for circling the wagons undeservedly. As Eve Online players took to the StarCitizen subreddit to poke fun, moderation there quickly took to banning anyone associated with the Eve Online subreddit, citing ‘brigading’. Citizens quickly answered the call to engage in quasi-religious apologetics for the beleaguered developers.

On its own, it may not be an issue. It’s difficult to say that an industrial ship with two arms extending in front of the cab could be unique IP or constitute brand identity. CCP Games clearly doesn’t believe it to be a significant problem, as CCP Guard took to Twitter to invite players of both games to fight it out over Eve Online’s actually existent massively multiplayer single universe, boasting hundreds of systems and tens of thousands of players online around the clock. Responding to a call to arms as the two subreddits engage in a fairly one-sided emotional battery, CCP Guard tweeted:

Now, while I would always encourage the #StarCitizen community and the @eveonline community to be friends…if you do need to settle things…maybe do it in an online game? <3https://t.co/hPOakz2JAn pic.twitter.com/OBxhCz3BAc

But they are uncannily similar, and while “two arms extending in front of the cab” might not be unique, it is certainly interesting that they share so much in common, from color scheme to purpose to functionality. The fact that the names differ by two letters only nearly moves it from farce into tragedy. Even so, CIG has sold hundreds of high-priced luxury concepts for its game, most of which have never made it into what they term the “persistent universe,” an instanced game world consisting of a handful of set pieces, often for thousands of dollars. At a modest $120 [Editor’s Note: if store credit is used, such as ‘trading in’ a ship to help pay for it, the price rises to $140], the Vulture is downright affordable (by Star Citizen standards), fitting for a salvaging frigate. Should the Vulture actually make it into the game, it will join a number of other hangar-ready paperweights in waiting for CIG to decide on what non-combat activity will actually look like in the game.

After years of silence on the topic of mining, leaked footage from the “Alpha 3.2” release has surfaced, showing the player shooting a laser at shale (of all things, and on an airless moon) in mining gameplay that somehow makes Elite’s mining lasers look engaging. The ‘entry-level’ mining ship has also been priced at $140.

While the Vulture may just be a coincidence, it’s hardly the first time CIG has been accused of plagiarism in its concept designs. CIG previously faced criticism due to the practices of former CIG artist Ryan Archer in using obvious copy and paste jobs in concept compositions. While concept artists often use such assets in rough concept work, this work is rarely used in marketing material or to promote extremely expensive ships. Star Citizen has also “borrowed” art from Eve before, copying the Immensea nebula for concept art last year. It isn’t even the first time they’ve been accused of copying a ship’s design. But Chris Roberts has never been wildly imaginative, preferring a very bland and derivative “World War 2 submarines and dogfights in space” aesthetic. It would be, perhaps, too much to ask for original ship designs, and they may not even fit into Chris’ vision for the game, whatever that may be.

This is what I mean: this is @RobertsSpaceInd blatantly stealing @EveOnline art (the Immensea nebula) for their own concept art. ON the left is the RSI "art", on the right the EVE art. pic.twitter.com/57TvcHg5Dr

At present, Star Citizen remains just slightly less complete than it was when we last reported on it in 2016. People with bad judgment are welcome to pay for access to the pre-alpha “Alpha 3.1,” and may even consider spending $27,000 to get most of the collection of ships (although most, it bears repeating, have not progressed beyond the concept stage). Don’t count on the Vulture being included though; you’ll need to drop at least another $120 on that.

Or you can actually appreciate the tedium of a real space job with your Venture in Eve Online, noted game that exists. $5 in PLEX affords somewhere around 220 Ventures and reasonable fittings, a savings of thousands of dollars versus the same number of Vultures. The insurance works, too!

And we’ve got a soft spot for miners in Delve.