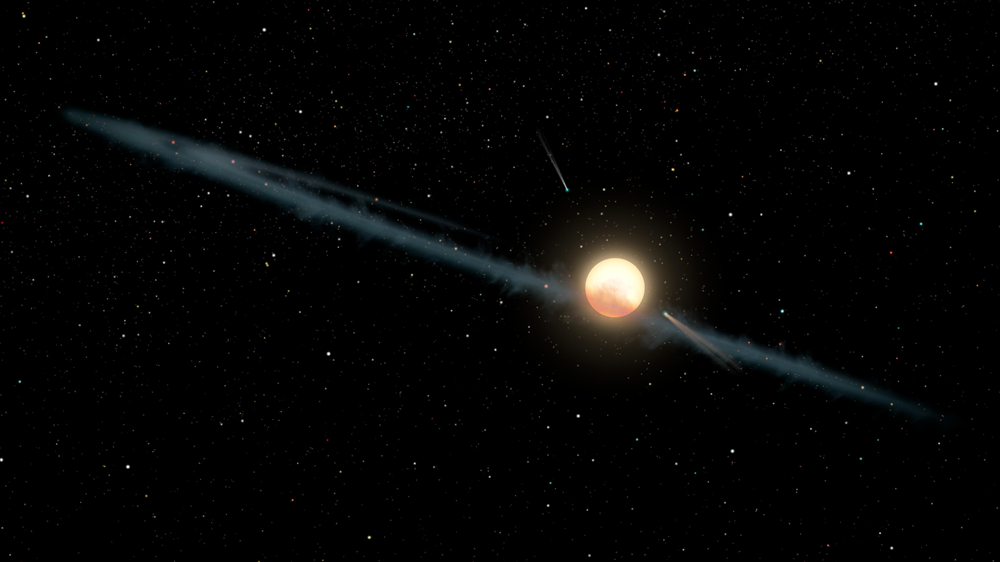 I hope all you spacefans had a fantastic holiday season and that your waistlines and hangovers are regaining a normal state of equilibrium. This time we have brown dwarfs an imaginary Mars and news on Tabby’s Star.

BROWN DWARFS A TARGET FOR THE WEBB TELESCOPE

I’ve always had a fondess for these strange objects that are neither planets, nor quite stars. They occupy some hot, gravy-coloured middle ground in between. It’s rather like the vagueness we see between a super-Earth and a sub-Neptune  exoplanet. Brown dwarfs blur the line between exoplanets and something that never quite makes it to the main sequence. They are far larger than a gas giant such as Jupiter, yet don’t have enough mass to start nuclear fusion.

We also don’t know exactly how they come into being. Do they form in a collapsing dust cloud like the Sun did 4.5 billion years ago? Or is it in a protoplanetary disc like the Earth? Scientists at the Université de Montréal may soon get closer to an answer. The team, lead by Étienne Artigau, will use the Webb telescope to study a young brown dwarf, labeled SIMP0136. They chose the brown dwarf for its proximity to the Sun and because it’s very characteristic of its being neither one thing or another fits the scientific remit.

“Very accurate spectroscopic measurements are challenging to obtain from the ground in the infrared due to variable absorption in our own atmosphere, hence the need for space-based infrared observation. Also, Webb allows us to probe features, such as water absorption, that are inaccessible from the ground at this level of precision,” Artigau explains. 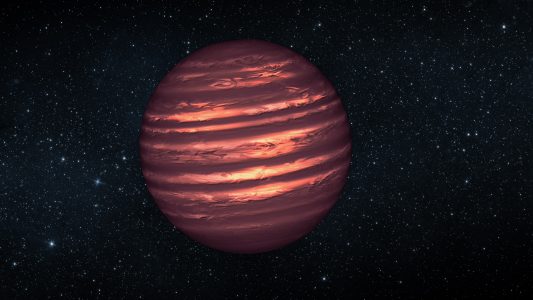 Artist’s conception of a brown dwarf, featuring the cloudy atmosphere of a planet and the residual light of an almost-star.
Credits: NASA/ESA/JPL

Another reason for checking out this stellar nobody is to examine its atmosphere. We can compare its spectrographic data with what we have previously seen in exoplanets and whatever we may come across in the future. This makes it rather like ‘control’ data in an experiment. SIMP0136 orbits a star, so when it transits we can delve more easily  into its composition. The Webb telescope seeks out objects in the infrared spectrum as this allows it to see through interstellar dust clouds. A low emission object such as a brown dwarf is an ideal target to  test its capabilities.

“In more than a decade of searching, our team has found it is very difficult to locate brown dwarfs that are less than five Jupiter-masses – the mass where star and planet formation overlap. That is a job for the Webb telescope,” Alex Scholz from the University of St Andrews, also involved in the project says. “It has been a long wait for Webb, but we are very excited to get an opportunity to break new ground and potentially discover an entirely new type of planets, unbound, roaming the Galaxy like stars.”

I for one can’t wait to see what the Webb telescope will find.

MARTIAN ATMOSPHERE AS A MODEL FOR EXOPLANET HABITABILITY

Mars has long been a conundrum as to its habitability with regard to its evolution and its past. Its easy to wonder how the red planet may have fared orbiting a star other than the Sun. Now the NASA MAVEN mission (Mars Atmosphere and Volatile Evolution) can help us do just that.

“The MAVEN mission tells us that Mars lost substantial amounts of its atmosphere over time, changing the planet’s habitability,” said David Brain, a MAVEN co-investigator and a professor at the Laboratory for Atmospheric and Space Physics at the University of Colorado Boulder. “We can use Mars, a planet that we know a lot about, as a laboratory for studying rocky planets outside our solar system, which we don’t know much about yet.”

The spacecraft carries instruments designed to obtain data from Mars’ atmosphere. Of particular interest is how Mars loses its atmosphere over time. The data shows most of the loss  coming from a combination of chemical and physical processes. MAVEN has also been observing how Mars’ atmosphere responds to variations in Solar activity like flares, coronal mass ejections etc.

One of the scenarios examined by the team is how Mars may have evolved if it orbited a red dwarf. These M-class stars are the most common type of stars. Hhow long a Mars-type planet may be habitable depends on many factors. These include proximity to the star and the type of red dwarf involved. Some can be very feisty flare stars that would strip the planet’s atmosphere very quickly. Temperature is also a factor. If the star is too hot, and its atmosphere might react with volatiles such as hydrogen. 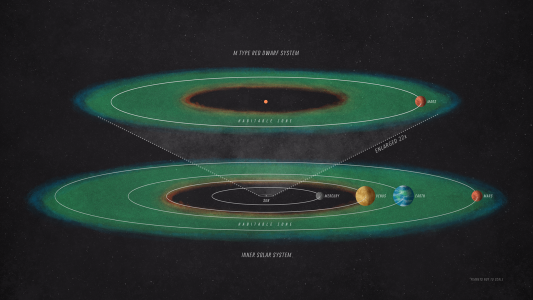 To receive the same amount of starlight as Mars receives from our Sun, a planet orbiting an M-type red dwarf would have to be positioned much closer to its star than Mercury is to the Sun.
Credits: NASA’s Goddard Space Flight Center

As it turns out, most scenarios lead to our exo-Mars having a shorter period of habitibility than in our Solar system, however, its being in that different solar may affect its geological processes in such a way as to extend its habitability, for example a magnetosphere to protect its atmosphere. To have a magnetosphere you need a liquid mantle around a planetary core and preferably tectonic activity, like we do!

“Habitability is one of the biggest topics in astronomy, and these estimates demonstrate one way to leverage what we know about Mars and the Sun to help determine the factors that control whether planets in other systems might be suitable for life,” said Bruce Jakosky, MAVEN’s principal investigator at the University of Colorado Boulder.

This is all the hypothetical type stuff we dream up all the time, but if you can imagine, imagining how you can think of other ways to put your space hardware to good use, I’m all for it.

Scientists may be closer to solving the mystery surrounding KIC 8462852, nicknamed ‘Tabby’s star’. A team at Lousiana State University, headed by Professor Tabetha Boyajian (hence ‘Tabby’s star’ geddit?) is studying the star. An average star, KIC 8462852 seems to brighten and dim in ways not seen with other stars. That’s led to attention and speculation. A kickstarter to secure funds for dedicated telescope time raised more than $100,000. Theories have included everything from comets, broken planetismals, to alien megastructures.

Much as I’d love for the latter, things usually turn out to be more mundane. Now, a new press release shows this mystery headed in that direction.

“Dust is most likely the reason why the star’s light appears to dim and brighten. The new data shows that different colors of light are being blocked at different intensities. Therefore, whatever is passing between us and the star is not opaque, as would be expected from a planet or alien megastructure,” Boyajian said.

Boyajian’s team has naturally watched this star very closely. They observed four dips in brightness between March 2016 and December 2017. Kickstarter supporters even got to name these dips. The first two became ‘Elsie’ and ‘Celeste’. The names of the last two recall lost cities of the ancient world. Number three is ‘Scara Brae’ after the legendary Scottish city, and the last is ‘Angkor’, from Cambodia. The team says the names are fitting:

“They’re ancient; we are watching things that happened more than 1,000 years ago. They’re almost certainly caused by something ordinary, at least on a cosmic scale. And yet that makes them more interesting, not less. But most of all, they’re mysterious,” wrote the authors.

“We’re gathering so much data on a single target. This project is reflective of changes in astronomy with the access to this flood of data,” said Tyler Ellis from Spokane, Wash., an LSU doctoral candidate studying this star.

Citizen scientists, very much like Eve’s Project Discovery, are helping to shed light on mysterious objects like this by poring over data from the Kepler mission.

“If it wasn’t for people with an unbiased look on our universe, this unusual star would have been overlooked,” Boyajian said. “Again, without the public support for this dedicated observing run, we would not have this large amount of data. It’s exciting. I am so appreciative of all of the people who have contributed to this in the past year – the citizen scientists and professional astronomers. It’s quite humbling to have all of these people contributing in various ways to help figure it out”

That’s it for this time spacefans, see you soon!