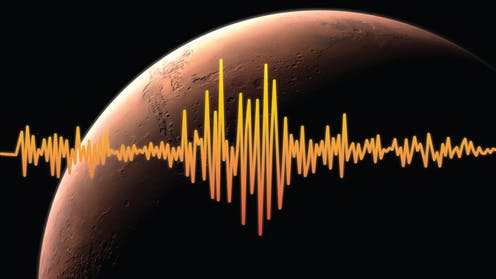 Happy Belated Star Wars Day! I’d like to hope that May the 4th is with you and Revenge of the 6th if you’re that way inclined! This time, spacefans we’re checking out some Mars news.

The new InSight mission is starting to pay off with the first ever measurement of a likely seismic event on the red planet. The signal is faint and so far we only have just the one instrument. On Earth we’d use several in order to get an accurate result. It is however a good start so we can gain a better idea as to what is going on inside the planet. In the past, readings have been inconclusive due to surface interference such as wind.

Seismic activity on Mars is thought to be nowhere near the activity we get here on Earth and this particular rumble would be lost in the general noise due to how active our plate tectonics are, plus our weather and oceans. Mars has a fixed lid crust that doesn’t move like the Earth’s due to its lack of water; water or other liquid is required to drive tectonics and generally lubricate land masses that then move around, bash into each other, split apart, move up and over each other as can be seen in our geological record. Mars’ crust still moves however due to its internal contracting and cooling that stresses its surface rocks

“The Martian Sol 128 event is exciting because its size and longer duration fit the profile of moonquakes detected on the lunar surface during the Apollo missions,” said Lori Glaze, Planetary Science Division director at NASA Headquarters.

“We’ve been waiting months for a signal like this,” said Philippe Lognonné, SEIS team lead at the Institut de Physique du Globe de Paris (IPGP) in France. “It’s so exciting to finally have proof that Mars is still seismically active. We’re looking forward to sharing detailed results once we’ve had a chance to analyze them.”

“We are delighted about this first achievement and are eager to make many similar measurements with SEIS in the years to come,” said Charles Yana, SEIS mission operations manager at CNES.

This may be just a small storm in a teacup seismically, but I certainly expect more to come.

Staying with Mars, the red planet has been giving us a few more clues about its history with water.

I’m sure we’re all aware of the sad fate of the Opportunity rover whose solar panels were covered in dust from the storm that obscured the planet’s surface last summer, leading to the rover’s demise. It dod however lend some serious insight as to Mars’ hydrological history. Dust storms on Mars are common and can last for months.

It’s now thought that there may be a link between these storms and why the planet lost its early surface water. Essentially, the storms carried it up to the outer atmosphere and unlike here on Earth, it was lost to space rather than being precipitated back to the surface as snow or rain. The atmosphere is a lot more tenuous and the gravity weaker meaning the planet cannot hold onto more volatile substances so losing important stuff like water is much more likely. That Mars has free flowing water is beyond doubt, how long it retained it is still a mystery, although we have compelling evidence it survived longer than previously thought and long enough for possible life to have emerged.

ARE WE ALL ALIENS?

I’m sure we all remember the interstellar visitor Oumuamua, the cigar shaped rock that passed through the Solar system recently. It was not in fact an alien artifact, however it did raise a number of questions as to how the heck we all got here, I mean in 4.5 billion years it will not have been the first and who knows where it came from or what secrets it may contain.

“We think that something like an Oumuamua … there’s always one within about 1 AU of the sun at any given time,” planetary scientist Bill Bottke said last month during a panel discussion at the Breakthrough Discuss conference at the University of California, Berkeley. “And that actually has some really interesting implications,” added Bottke, who directs the Department of Space Studies at the Southwest Research Institute in Boulder, Colorado. Oumuamua’s exact size is unknown, but researchers think it spans less than 800 meters in its longest dimension. The object displayed “nongravitational acceleration” as it cruised away from the sun, spurring speculation that ‘Oumuamua could be an alien spacecraft of some kind. But the consensus view is that the stray rock is icy and its weird movements were caused by outgassing in the same way comets produce their tails.

“This tells us that ices can survive over these interstellar distances,” astrobiologist Karen Meech, of the University of Hawaii’s Institute for Astronomy, said during the Breakthrough Discuss panel. “You’re probably getting significant protection on the inside, and you’re not getting any deeper with the radiation field or heating from supernovae below 10, 20 meters [33 to 66 feet] depth in a body,” Meech said. “So, the idea that you could bring some living organism in some state — it could be preserved in a cold deep freeze. So, it would be no different than coming from our outer solar system.”

We have no idea where the object originated, but it may well be a planetismal shard from a distant solar system that has been travelling through space for whoever knows how long. 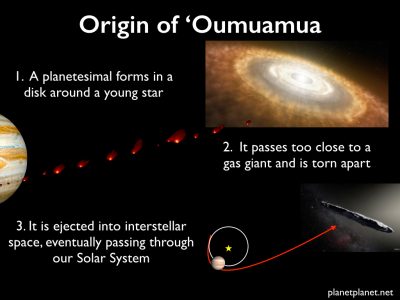 It was travelling at high velocity, 215,000kph so if a similar object had slammed into our planet when it was young, could any material have survived? Its not impossible, but personally I’d prefer to look for another similar mysterious object and try to catch it and see if anything is preserved in it. Panspermia is not a new idea by any means, but having new ideas about testing the theory behind it, particularly as technology advances so we can identify and examine such object is an exciting thought!

See you next time spacefans and hopefully at an Eve event near you!