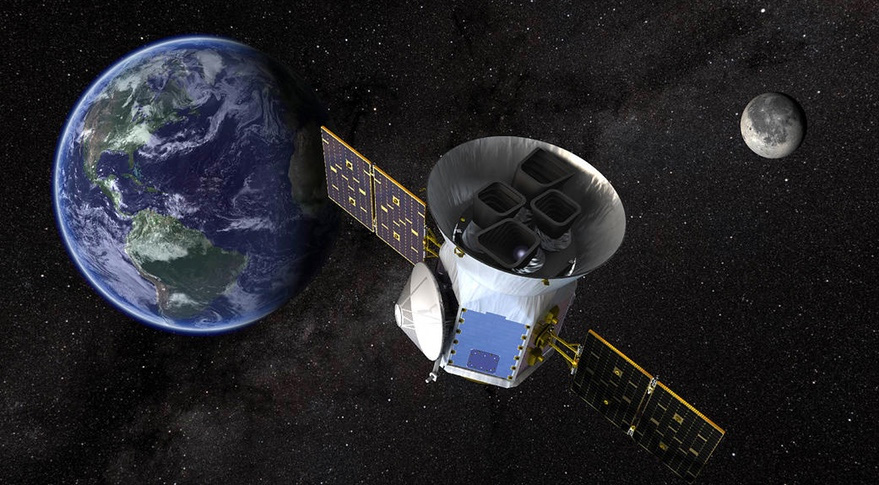 This time spacefans, we’re all about exoplanets as TESS has its first birthday.

The Transiting Exoplanet Survey Satellite is celebrating its first year in operation in style by finding several new planets in different systems. The first are found in a system 73 lightyears away closely orbiting theirM-type red dwarf star one third cooler than the Sun.

“This system is exactly what TESS was designed to find — small, temperate planets that pass, or transit, in front of an inactive host star, one lacking excessive stellar activity, such as flares,” said lead researcher Maximilian Günther, a Torres Postdoctoral Fellow at the Massachusetts Institute of Technology’s (MIT) Kavli Institute for Astrophysics and Space Research in Cambridge. “This star is quiet and very close to us, and therefore much brighter than the host stars of comparable systems. With extended follow-up observations, we’ll soon be able to determine the make-up of these worlds, establish if atmospheres are present and what gases they contain, and more.” 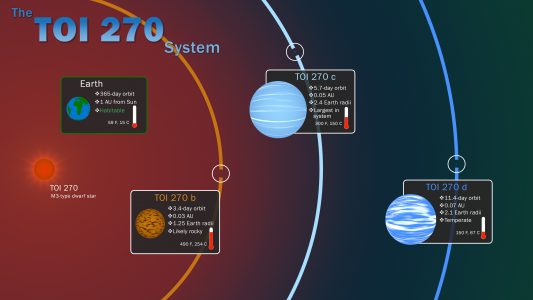 This infographic illustrates key features of the TOI 270 system, located about 73 light-years away in the southern constellation Pictor. The three known planets were discovered by NASA’s Transiting Exoplanet Survey Satellite through periodic dips in starlight caused by each orbiting world. Insets show information about the planets, including their relative sizes, and how they compare to Earth. Temperatures given for TOI 270’s planets are equilibrium temperatures, calculated without the warming effects of any possible atmospheres.
Credits: NASA’s Goddard Space Flight Center/Scott Wiessinger

The system contains planets of a size not found in our Solar system, but are common elsewhere. The innermost planet is very hot due to its proximity to its star. It orbits every 3.4 days 13 times closer to the star than Mercury orbits the Sun, with an estimated mass 1.9 times that of Earth. This means it is likely to be a rocky super-Earth. The other two planets orbit at 5.7 and 11.4 days respectively with masses of 7 and 5 times that of Earth, making them likely sub-Neptune planets. Due to their close orbits, these worlds are probably tidally locked, like the Moon is to Earth.

“An interesting aspect of this system is that its planets straddle a well-established gap in known planetary sizes,” said co-author Fran Pozuelos, a postdoctoral researcher at the University of Liège in Belgium. “It is uncommon for planets to have sizes between 1.5 and two times that of Earth for reasons likely related to the way planets form, but this is still a highly controversial topic. TOI 270 is an excellent laboratory for studying the margins of this gap and will help us better understand how planetary systems form and evolve.”

Günther’s team is especially interested in the outermost planet, TOI 270 d. The team estimates the planet’s equilibrium temperature to be about 66 degrees C. This makes it the most temperate world in the system and, as such, a rarity among known transiting planets.

“TOI 270 is perfectly situated in the sky for studying the atmospheres of its outer planets with NASA’s future James Webb Space Telescope,” said co-author Adina Feinstein, a doctoral student at the University of Chicago. “It will be observable by Webb for over half a year, which could allow for really interesting comparison studies between the atmospheres of TOI 270 c and d.”

The team are planning finding out if there are more planets in the system as planet d is too warm to host liquid water, whereas one stightly further out could be a good canditate, if its the right size of course!

Anther planet also orbiting an M-type star has also been found, closer at 31 light years away from Earth, orbiting every 3.9 days. two other planets have also been detected.

Tour the GJ 357 system, located 31 light-years away in the constellation Hydra. Astronomers confirming a planet candidate identified by NASA’s Transiting Exoplanet Survey Satellite subsequently found two additional worlds orbiting the star. The outermost planet, GJ 357 d, is especially intriguing to scientists because it receives as much energy from its star as Mars does from the Sun.
Credits: NASA’s Goddard Space Flight Center
“In a way, these planets were hiding in measurements made at numerous observatories over many years,” said Rafael Luque, a doctoral student at the Institute of Astrophysics of the Canary Islands (IAC) on Tenerife who led the discovery team. “It took TESS to point us to an interesting star where we could uncover them.”

The transits TESS observed belong to GJ 357 b, a planet about 22% larger than Earth. It orbits 11 times closer to its star than Mercury does our Sun. This gives it an equilibrium temperature  calculated without accounting for any greenhouse warming of around 254 degrees Celsius.

“We describe GJ 357 b as a ‘hot Earth,’” explains co-author Enric Pallé, an astrophysicist at the IAC and Luque’s doctoral supervisor. “Although it cannot host life, it is noteworthy as the third-nearest transiting exoplanet known to date and one of the best rocky planets we have for measuring the composition of any atmosphere it may possess.”

The two innermost planets of this system are far too hot for life as we know it, however, the third planet is located at the outermost edge of the system’s habitable zone.

“GJ 357 d is located within the outer edge of its star’s habitable zone, where it receives about the same amount of stellar energy from its star as Mars does from the Sun,” said co-author Diana Kossakowski at the Max Planck Institute for Astronomy in Heidelberg, Germany. “If the planet has a dense atmosphere, which will take future studies to determine, it could trap enough heat to warm the planet and allow liquid water on its surface.”

If it doesn’t have any atmosphere, it has an equilibrium temperature of -53 C, which is decidedly on the chilly side. The planet weighs at least 6.1 times Earth’s mass, and orbits the star every 55.7 days at a range about 20% of Earth’s distance from the Sun. The planet’s size and composition are as yet unknown, but a rocky world with this mass would range from about one to two times bigger than Earth. More studies will need to be done to discover more of these planet’s properties.

NASA’s Hubble Space Telescope has found magnesium and iron gas streaming from a very odd exoplanet called WASP-121b. The observations show for the first time that so-called “heavy metals”, which are elements heavier than hydrogen and helium, have been spotted escaping from a hot Jupiter, a large, gas giant which orbits very close to its star.

Usually, hot Jupiter sized planets ahave an interior cool enough to condense more massive elements such as magnesium and iron into clouds, but that’s not the case with WASP-121b, which is orbiting so dangerously close to its star that its upper atmosphere reaches a very toasty 2538C. The WASP-121 system resides about 900 light-years away from us.

“Heavy metals have been seen in other hot Jupiters before, but only in the lower atmosphere,” explained lead researcher David Sing of the Johns Hopkins University in Baltimore, Maryland. “So you don’t know if they are escaping or not. With WASP-121b, we see magnesium and iron gas so far away from the planet that they’re not gravitationally bound.” 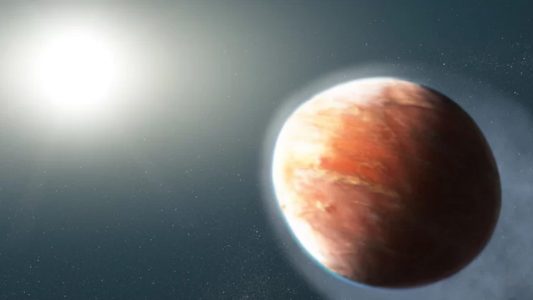 The planet’s star is hotter than our Sun, so will heat the planet’s atmosphere more powerfully and will lead to the escape of these metallic gases. The reason for the planet’s odd shape is due to gravitational tidal forces from its star which threaten to pull the planet apart.

“We picked this planet because it is so extreme,” Sing said. “We thought we had a chance of seeing heavier elements escaping. It’s so hot and so favorable to observe, it’s the best shot at finding the presence of heavy metals. We were mainly looking for magnesium, but there have been hints of iron in the atmospheres of other exoplanets. It was a surprise, though, to see it so clearly in the data and at such great altitudes so far away from the planet. The heavy metals are escaping partly because the planet is so big and puffy that its gravity is relatively weak. This is a planet being actively stripped of its atmosphere. The hot Jupiters are mostly made of hydrogen, and Hubble is very sensitive to hydrogen, so we know these planets can lose the gas relatively easily, but in the case of WASP-121b, the hydrogen and helium gas is outflowing, almost like a river, and is dragging these metals with them. It’s a very efficient mechanism for mass loss.”

The WASP-121b study is part of the Panchromatic Comparative Exoplanet Treasury (PanCET) survey, a Hubble program to look at 20 exoplanets, ranging in size from super-Earths (several times Earth’s mass) to Jupiters (which are over 100 times Earth’s mass), in the first large-scale ultraviolet, visible, and infrared comparative study of distant worlds. The idea is to study planets like these in order to find out how young planets lose their original atmospheres when they condense from their protoplanetary discs as their solar syatem forms.

GET OUTSIDE ITS METEOR TIME!

Its August, which means you should all head outdoors to see one of the best shows in the sky. The Perseids are cometary debris made up of tiny bits ice and rock that burn up as they hurtle through our atmosphere and occurs when the Earth crosses the littered path of the 17-mile-wide Comet Swift-Tuttle, which travels in a 133-year-long orbit. The shower will be at its peak on the 11th August and at its best between 2am and dawn in the Northern hemisphere, preferably after the Moon sets.

That’s all for this time spacefans.