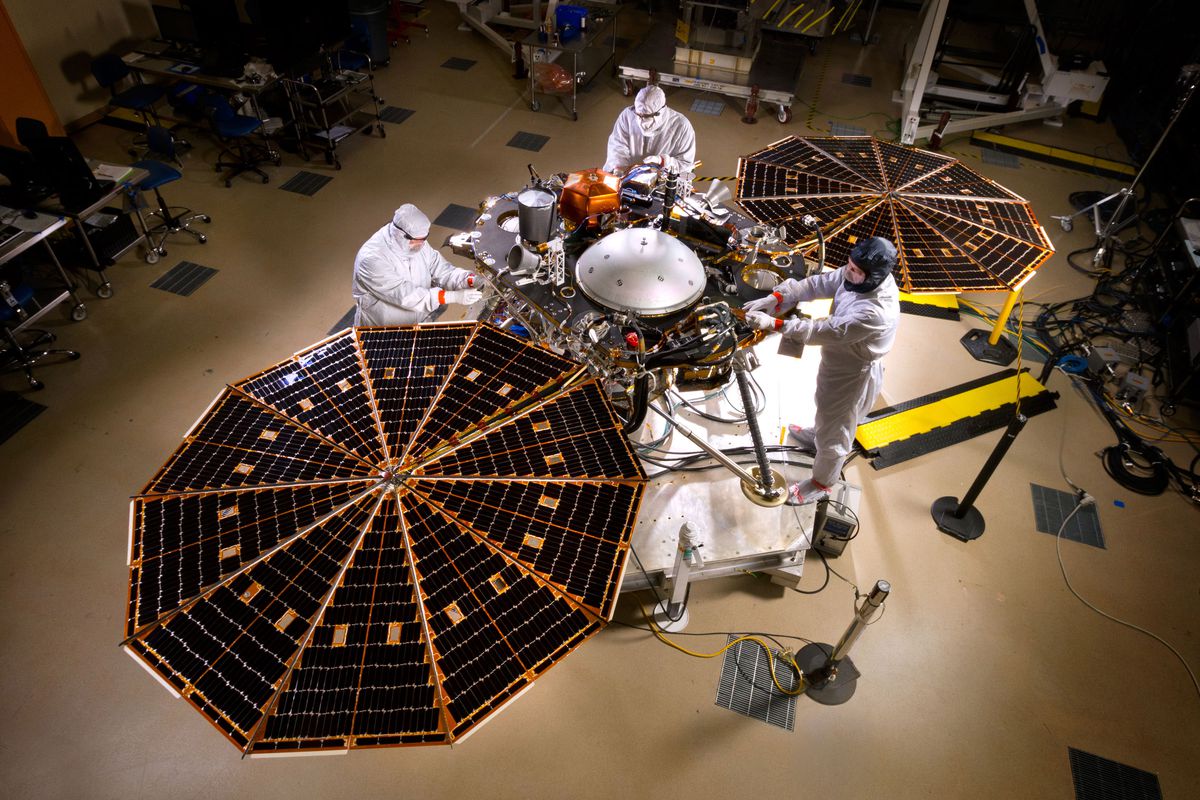 Its been a very exciting time lately spacefans! I hope all my US spacepeeps are over the turkey coma as this time we’re all about Mars!

I don’t know about you, but I for one was  biting my lip and crossing all the things, hoping all would go well. Thankfully everything went like clockwork and the lander appears to be working as intended. If you haven’t seen it you can watch a neat little mini documentary here:

So we have a new addition to Mars’ population of robots. After a seven month journey the lander has touched down at Elysium Planitia which for a rover, would not be terribly exciting, only this isn’t a rover and unexciting is what we’re after. InSight is there to look into the interior of the planet, not wander about.

“Today, we successfully landed on Mars for the eighth time in human history,” said NASA Administrator Jim Bridenstine. “InSight will study the interior of Mars, and will teach us valuable science as we prepare to send astronauts to the Moon and later to Mars. This accomplishment represents the ingenuity of America and our international partners and it serves as a testament to the dedication and perseverance of our team. The best of NASA is yet to come, and it is coming soon.”

The telemetry was relayed to NASA’s Jet Propulsion Laboratory (JPL) in Pasadena, California, via NASA’s two small experimental Mars Cube One (MarCO) CubeSats, which launched on the same rocket as InSight and followed the lander to Mars. They are the first CubeSats sent into deep space, and I sincerely hope not the last! After successfully carrying out a number of communications and in-flight navigation experiments, the twin MarCOs were set in position to keep a close eye on things during InSight’s entry, descent and landing.

“We hit the Martian atmosphere at 19,800 kilometers per hour, and the whole sequence to touching down on the surface took only six-and-a-half minutes,” said InSight project manager Tom Hoffman at JPL. “During that short span of time, InSight had to autonomously perform dozens of operations and do them flawlessly — and by all indications that is exactly what our spacecraft did.  We are solar powered, so getting the arrays out and operating is a big deal. With the arrays providing the energy we need to start the cool science operations, we are well on our way to thoroughly investigate what’s inside of Mars for the very first time.”

“Landing was thrilling, but I’m looking forward to the drilling,” said InSight principal investigator Bruce Banerdt of JPL. “When the first images come down, our engineering and science teams will hit the ground running, beginning to plan where to deploy our science instruments. Within two or three months, the arm will deploy the mission’s main science instruments, the Seismic Experiment for Interior Structure (SEIS) and Heat Flow and Physical Properties Package (HP3) instruments.”

The drilling instruments can penetrate the surface to a depth of 5 meters. Part of the science mission is to measure the temperature so we have a better idea as to what the core of the planet is like. By doing this we also gain a better idea as to the likelyhood of subsurface liquid water with its obvious implications to possible extant life. 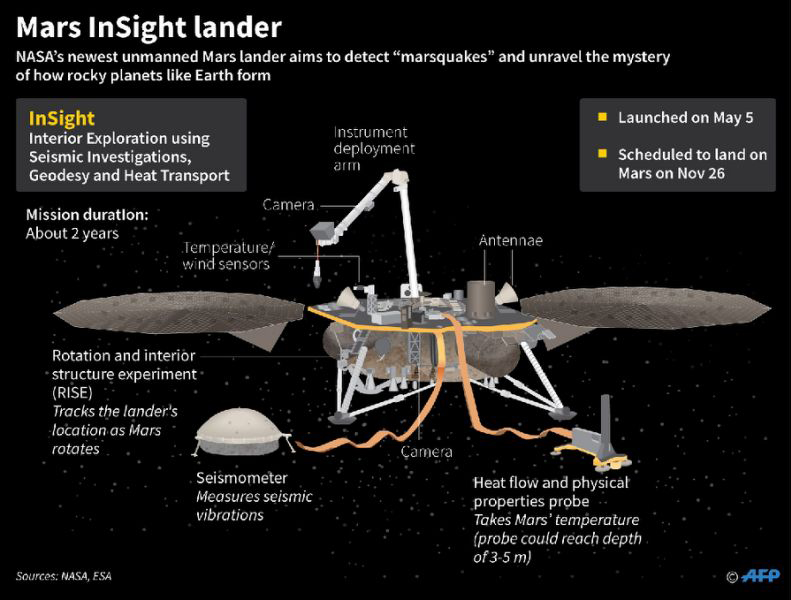 “Every Mars landing is daunting, but now with InSight safely on the surface we get to do a unique kind of science on Mars,” said JPL director Michael Watkins. “The experimental MarCO CubeSats have also opened a new door to smaller planetary spacecraft. The success of these two unique missions is a tribute to the hundreds of talented engineers and scientists who put their genius and labor into making this a great day.”

I’m sure some may well ask why its so important to examine our neighbour in this fashion, but there are several very good reasons. Firstly Mars’ planetary evolution stopped in its tracks billions of years ago whilst ours didn’t. Mars is smaller than Earth, smaller than it should be due to a lot of mass being hoovered up by Jupiter in its drunken youth  in the early Solar system staggering around gravitationally with Saturn and causing chaos such as the Late Heavy Bombardment whose scars can be seen on the surfaces of all the rocky bodies and floating detritis in the asteroid belts. Mars has no tectonics, it has a solid ‘lid’ like Venus. Now plate tectonics requires lube, water is pretty good at that, works for Earth at any rate, our surface gets recycled as does heat. We know the outer mantle of the Earth is liquid which gives us our protective magnetosphere which shelters us from Solar hissy fits.

We have no evidence of tectonics on Mars today, but there is evidence that suggests plate spreading-like the mid-Atlantic Ridge along with with magnetic anomalies, that in it’s youth, Mars started off like things did here. It stopped though. We need to establish if there is still geologic activity such as Marsquakes, how warm is the core?

A lighthearted view of the mission you can watch here:

“One of our key questions regarding habitability is, what are the key conditions planets need for life to form?” said Sue Smrekar, InSight’s deputy principal investigator at JPL. “Understanding a planet’s initial building blocks set the stage for how processes that affect the environment evolve over time. Mars is a laboratory for how all these processes happen early in a planet’s formation,” Smrekar said. “InSight will help constrain our models of how planets are made and change over time.” 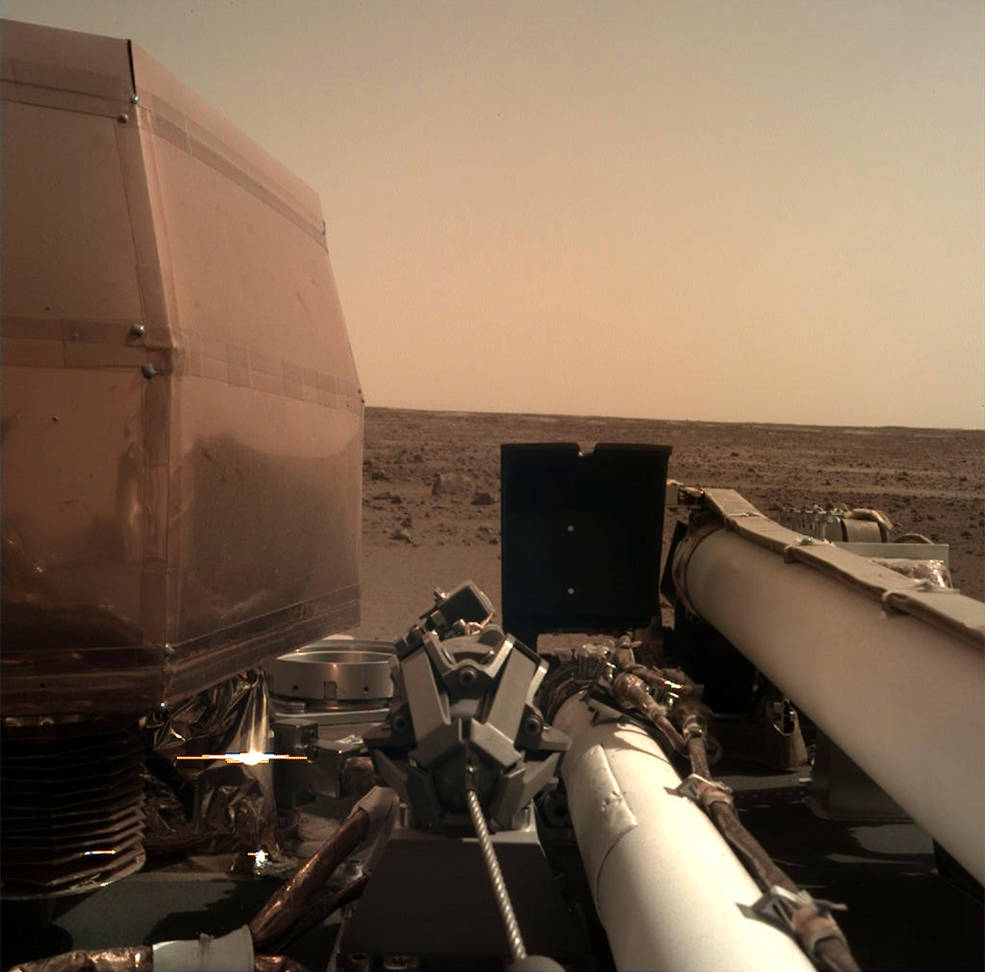 The Instrument Deployment Camera (IDC), located on the robotic arm of NASA’s InSight lander, took this picture of the Martian surface on Nov. 26, 2018, the same day the spacecraft touched down on the Red Planet. The camera’s transparent dust cover is still on in this image, to prevent particulates kicked up during landing from settling on the camera’s lens. This image was relayed from InSight to Earth via NASA’s Odyssey spacecraft, currently orbiting Mars.
Credits: NASA/JPL-Caltech

“The InSight team can rest a little easier tonight now that we know the spacecraft solar arrays are deployed and recharging the batteries,” said Tom Hoffman, InSight’s project manager at NASA’s Jet Propulsion Laboratory in Pasadena, California, which leads the mission. “It’s been a long day for the team. But tomorrow begins an exciting new chapter for InSight: surface operations and the beginning of the instrument deployment phase.”

The OSIRIS-REx asteroid mission is next up on December 3rd at 11:54 AM EST, so please pray to whatever you prefer to ensure its safe arrival and we’ll discuss it next time spacefans!