Space Engineers: Beta than Before?

On October 23, 2013, Keen Software House released Space Engineers as an early access title on Steam. Back then, it was nothing more than a sandbox builder propped up by a robust  physics-based collision system. But as time passed, the developers added a wealth of new content.

And on December 15, Keen Software House updated the game to version 01.166 – the first stable beta build of Space Engineers. 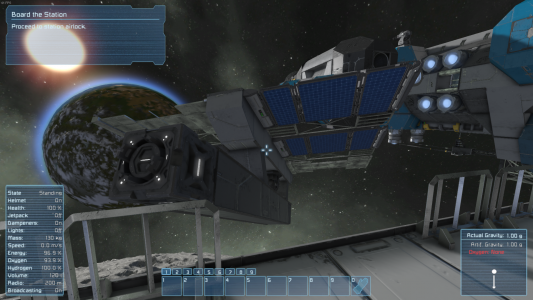 It’s funny to think that Space Engineers has been in Alpha for over three years, but looking at how far the game has come is evidence of the care the developers are taking to make sure that it is headed in the right direction. To wit, it isn’t often that Early Access is taken so seriously.

The beta update is evidence of this seriousness.

A litany of bug fixes are included in the latest version. Besides that, the changes to the game (and gameplay) are few, meaningful, and remarkable enough to make the step into beta feel earned. 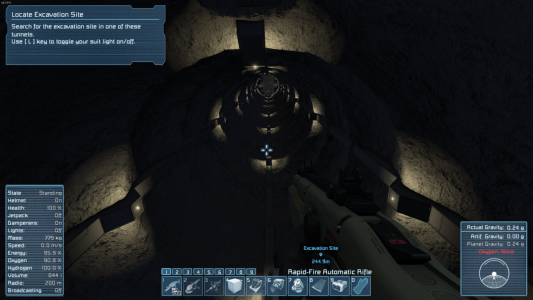 The most noteworthy change in the 01.166 update is the addition of a five mission campaign. Its purpose is to familiarize new players with Space Engineers, but it succeeds as a tutorial in only the most general sense. This goal is further complicated by a GUI that is fairly unforgiving to players unfamiliar with the game.

There are other issues, too.

At the end of mission 3, the player must use the new “Drive-By Turret shooting” mechanic to destroy weak points on an enemy starship. But because the enemy shoots back, it is possible for both ships to be severely damaged to the point where neither can move as scripted by AI autopilots. In my playthrough, this happened to me, and I was unable to destroy all of the enemy vessel’s weak spots (to be fair, I was able to “fix” this hangup with liberal use of the grinder, but I’m not sure a new player to the SE experience would think to do the same).

In missions 4 and 5, the player must pilot small vessels to complete objectives. But these are extremely fragile and easily break upon collision with the game world. I was forced to restart both of these missions multiple times because of this. Though not game breaking, it was excessively annoying.

Further, the campaign focuses more on narrative than the general tenets of Space Engineers – mine, build, destroy, repeat – which can be confusing when transitioning to survival or creative mode. Normally, this wouldn’t be a criticism, but playing the tutorial doesn’t even provide an inkling of the type of gameplay available in the survival, or creative, experience.

These missteps are forgivable when considering the campaign as a whole. The five missions are built within the bounds of the base game. Everything the player sees and experiences is a product of the systems put in place by the developers. This means that the game can be utilized as its own dev kit. And considering the quality of the campaign included in the 01.166 update, I’m excited to see what the Space Engineer community comes up with. 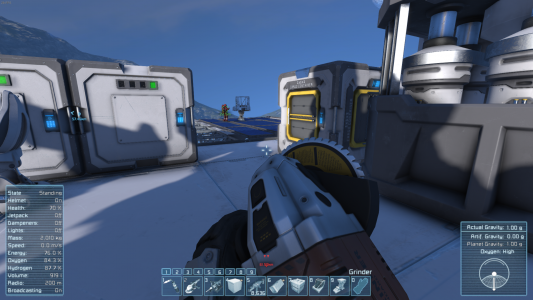 Survival mode is where the update falls short. While the visual overhaul looks amazing, some of the issues that have been with the game for a while still exist. And a few new bugs have appeared, as well.

For instance, issues with wheels persist. On flat surfaces, they still work marginally well, but once driven over uneven voxel based terrain, they glitch and break. Further, small landing gear are currently broken and will only tenuously stand on whatever surface they are placed upon (assuming there is gravity). Posts on Reddit and Steam Forums cite saving/reloading as a fix for small landing gear already placed in the game world, but this is a hassle – one that is, hopefully, fixed soon.

Planetary gameplay is also still exceedingly difficult. Resources – with the exception of ice – are hard to find. To compound this, the hand drill’s ore detector doesn’t seem to work while on a planet’s surface.

So, despite the update, some areas still need improvement. 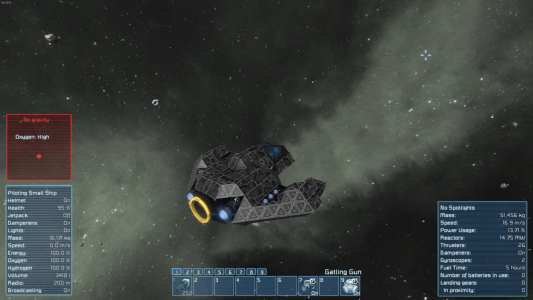 “Beta simply means that we feel the game now has a solid foundation.”

This quote is, perhaps, the most important from the developer’s comments on the update. And truthfully, Space Engineers has had a solid foundation for quite some time. Griping and nitpicking is easy to do when certain issues have persisted for months of a development cycle, but it is important to remember that update 01.166 is just another step towards the completed version. And that this update has pushed the game far closer to feeling complete than any other the developer has released.

Space Engineers has been worth purchasing for a while, but the 01.166 update moves it closer to a “must buy” for fans of the survival genre. While there are plenty of other offerings available – including a few interesting titles released in the past few months – Space Engineers has been on the scene for years and still reigns supreme. Even more so now that it features a campaign.

At regular price, the game is available on Steam for $19.99, but I would expect that to drop during the (recently confirmed) Holiday Sale. If not, it’s worth full price. Just make sure to line up the purchase with any end-of-year vacation – you’ll need the extra play time.