CCP has once again produced the Monthly Economic Report for July 2018 for this paradise we call New Eden.

Here we are just beyond the halfway point of 2018. It seems like yesterday we were in the cold grasp of winter and the meaning of what was happening economically in EVE was just coming to light for many.

By now everyone except the most anti-meta, anti-null sec players know that the Imperium has harnessed the power of the player and the intricacies of the mechanics of EVE’s economic gameplay. This has led them to become a major economic engine. No amount of Bee Control or even a full-scale deployment has yet stopped them from outshining most of New Eden.

Delve did slip in July to second place in total production with The Forge regaining the monthly crown. Delve did maintain the overall lead for 2018 YTD for total production. Overall income was reduced by about 39% over last month. Even with that drop Delve was many times the income of it’s nearest competitor.

What is the dynamic that makes it all work? Why does the Imperium seem to be an anomaly? There are other large alliances in EVE. Some near half the size of the Imperium, yet they produce a much smaller fraction of the wealth.

If we use total bounty income and total mining value to represent the value extracted from a region we see some interesting trends. I don’t use total produced because it has a longer trendline and the Imperium produces enough that it screws the numbers so much that it makes trending hard to see. Using mining and ratting income is more representative of the general population of a region. 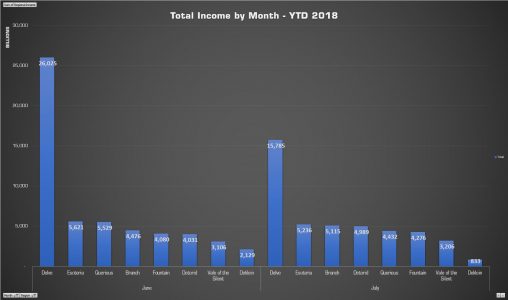 The graph above tells an interesting story. The top 7 producing regions for July shows 3 of them to be Imperium controlled or influenced. Deklein has become a mere shadow of its former self. Delve being under full deployment with an intermittent supercapital umbrella having only a 39% drop in mining and ratting income is in and of itself amazing.

There are a few key things a player in EVE is looking for in the game. Safety, camaraderie and friendship, income potential, and fights are high on that list. No matter what else you want to do in EVE those are core tenets of what players want. Let’s break this down.

Let me just address the next item in this way: New Eden is a mirror of the world. All the differences we have in the real world exist here. To be successful in that environment you need to build an organization that respects those differences while at the same time forming a common bond toward a common goal. Not easy in the emo rage-ridden world of online gaming.

Infrastructure, safety, guidance, and organization are all key factors in raising a regions income potential. Good leadership will establish the basic rules for how everything operates. Knowing clear-cut rules helps members know how to maximize income potential.

EVE is about fighting – big kills, dominating your enemies and all that good stuff. Without it, New Eden is less fun. If you do not keep your FC’s and members sharp you can’t hope to defend your home space against potential aggressors. If you don’t keep those who lean toward PVP engaged you will lose them. These folks are key for the safety factor in a region.

Every player has a reason for his or her actions. Some are philosophical. Some base it on e-honor or whatever the kids are calling it today. Some stick to misconceptions of organizations. Some look for income optimization. Most look at the big picture outlined above.

Cutting to the Chase

I can recall a time in my EVE-life when we would struggle for a share of the 30-40 billion we could make as a group in a C5 wormhole. Pulling in 1 or 2 billion of that was an amazing amount to us. That’s peanuts to someone in Delve. Let me re-phrase that a bit. That amount can be peanuts to someone in Delve in a single weekend if they put even a modicum of effort into it.

Economic data is a piece of the information puzzle that helps paint a picture of what is going on in New Eden. You only need to take some time to put it all together.