The Scope Shows Us The Jackdaw 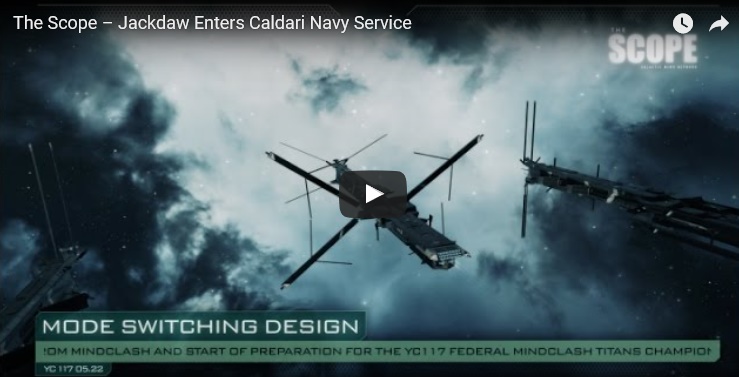 Earlier today, The Scope released a new video with Lina Ambre reporting on the Caldari Navy’s latest ship: The Jackdaw. The Jackdaw will be the next scheduled tactical tech 3 destroyer to hit New Eden and this latest video shows us what this upcoming missile boat will be capable of. This video comes as a follow up to Alton Haveri’s report with The Scope earlier in April. The new video confirms the production of the Jackdaw and gives us more information on the Caldari Navy’s current actions regarding them.

According to The Scope, The Caldari Navy have begun testing these ships, and are currently running fleet exercises with them. The testing is not limited however to members of the Caldari Navy and players are able to check out this new Caldari vessel on the Singularity test server.

Current, non-finalized stats for The Jackdaw are as follows:

Also in the video is an “unexpected unveiling” of the Gallente Federation’s answer to the T3 arms war: The Hecate. The upcoming Gallente Tactical destroyer will not be coming with the next release, however The Scope does indicate that they will be in production and ready for combat by the end of this year. According to the Scope there have been no “performance details” on the Hecate, however it is being compared to the Jackdaw.

TMC’s Froggy Storm gave us an early review of the upcoming tactical destroyers back in late April. In the article we see that the Hecate should stand out and may have some creative fitting possibilities.

The Scope videos are currently released via the EVE Online Official Youtube Channel every Friday.

This article originally appeared on TheMittani.com, written by Wolf Merrik.