Revenant Down in Placid

In Placid at 21:56 in Vey today a Revenant belonging to Elissim4U, alt of TinkerHell of Cynosural Field Theory lost his Revenant pirate supercarrier to Snuffed Out.

The kill is the third Revenant this year after just two dying in the two previous years. 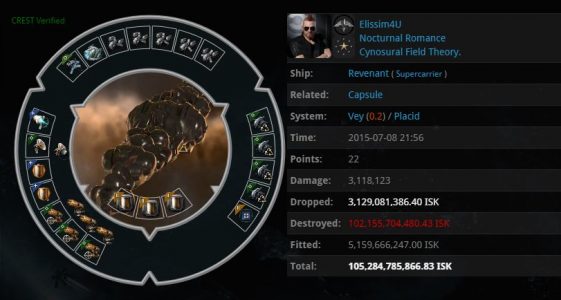 When reached for comment, Sven Tekitsu of Snuffed Out gave this extremely well written reply:

“In the history of EVE there are few systems that are marred forever by events that transpired within, Odamia, Asakai, B-R5B. On July 8th, the system of Vey joined this brotherhood, as the Revenant of Elissim4U met its end at the hands of Snuffed Out.

The story of how Elissim4U lost his Revenant is no simple tale of fumbling cynos on the way to a new home system. Starting early in Wednesday evening,  Snuffed Out began one of its most ambitious operations yet, attempting to bait one of the most dangerous Super-capital groups in low-sec capital warfare, Nocturnal Romance.  However, getting the attention of Nocturnal Romance isn’t easy, and past attempts to catch Nocturnal Romance had been halted by their allies in Shadow Cartel stumbling upon Snuffed Out’s staging systems. Today was different, the Dreadnoughts of a much earlier attempt were abandoned for something..bigger. Through a trick of hand earlier in the week, Snuffed Out had managed to swap one if its Titans with a hitherto unseen alt. From here, the Titan was moved within jump range of Nocturnal Romance, and the trap, as it was, was laid in motion.

From here, Snuff mobilized their sub caps and a modest combat archon group, into a system within jump range of their bait Titan. From here, all that was left would be alert Nocturnal Romance to the presence of a mysterious Titan lurking about nearby. If there is anyone outside of Snuffed Out responsible for the death of Elissim4U, it would be Serj Reaper, who carefully leaked the Titans location to Nocturnal Romance. After a brief period, Nocturnal Romance gathered a decent sub-capital fleet and set out to find the Titan reported by Serj. Shortly after they arrived on grid with the Titan, it miraculously decloaked, apparently making a run for it! As Snuffed Out waited with baited breadth, Nocturnal Romance began to slowly kill the Titan with only a Dominix fleet, much to the dismay of Snuffed Out. However, watch lists on the Snuffed Out side began to slowly rise, with a small number of Nocturnal Romance Nyx’s reported within Nocturnal Romances home system, followed by the surprisingly addition of an Revenant. As Snuffed Out continued to watch their ersatz titan whittled down by the Nocturnal Romance Dominix gleet, Nocturnal Romance suddenly lit a cyno and strangely brought in their Revenant alone. As soon as the Revenant appeared on grid, the call was made for Titan bridges in Snuffed Out’s staging to catapult HICs and Bhaalgorns almost directly on top of the Revenant. Having kept a few cyno stealth bombers ready near the supposedly beleaguered Titan, Snuffed Out managed to attain close in-cynos to the Revenants own beacon. The Revenant immediately began a panic warp to a nearby celestial, a FW novice outpost, with the Snuffed Out HICs in close pursuit. Unluckily for the Revenant pilot, the warp changes make for a mighty slow warp with a super, landing him in a hornet cloud of angry HICs and Bhaalgorns. While the earlier mentioned Nocturnal Romance Dominix fleet quickly arrived to drive off the HICs, the Bhaalgorns of Snuffed Out drove them off in relatively short order. Having secured the grid, Snuffed Out supers descended upon the Revenant, marking the death of the fourth Revenant in recorded history, ironically, to the group that helped to kill the first.”

When reached for comment, TinkerHell confirmed all said by Sven in addition to saying he used his Revenant to see if it was bait, an admittedly bad decision. As for the fit, TinkerHell says he is a cheap bastard, which all contacted corpmates of his confirm.

This article originally appeared on TheMittani.com, written by Siaka Stevens.