Renting has long been a common means of alliance income for dwellers in the South and was the primary economic engine that powered the successful Drone Russian invasion of the Northern Coalition in 2011. Legion of xxDeathxx’s was so advanced in their business that they rented from an ecommerce system that enabled a renter to shop, select a system, and transfer ISK without even talking to a rental manager. Even considering this history, it is not apparent just how lucrative renting is in the game. 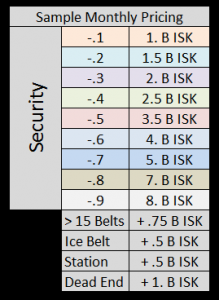 Slavery and serfdom gimmicks aside, renting is simply an agreement made by players who want to reap the bounty and content of nullsec without the burden of commitments to a nullsec corporation or alliance. Pricing is typically based on security status and can be adjusted up or down based desirable factors such as a large amount of belts, dead end systems (low traffic), ice belts, and the presence of an outpost – see figure 1. As long as the bills are paid, and the rules are followed, access to the space and blue standings are guaranteed.

Landlords generally prefer to hold sov in outpost systems, with the tenant joining a rental alliance as a corporation. However, if your ego or space plans demand it, owning your own outpost as a nullsec alliance leader is within your reach if you have the ISK. Furthermore, building supers is often allowed, but is not recommended, with landlords being non-committal over the defense of a renter CSAA.

Less common rental models do exist, such as the rental of a shared pool of space or where the rental alliance holds no sovereignty. This “sov-less white trash” model is a poor value, as it deprives renters of sov benefits – chiefly beacons, planetary interaction, and fuel bonuses for towers. Test’s Honey Badger Coalition is probably the largest example of this model ever used. Renters typically pay a rate based on their corporation size in this model.

My Tenure as a Slumlord

In 2011, after the fall of the Northern Coalition to the Drone Russian forces, Controlled Chaos [WTF] thought it would be a good idea to give up our seven technetium moons in Pure Blind and join Red Alliance’s effort to consolidate power in the South. With just a handful of neodymium moons in our portfolio, it was not long into the conflict that we badly needed ISK. I was given the task of obtaining 10-12 billion ISK through rental agreements and had a license to rent as much of Tenerifis as needed to achieve that goal. I easily met and surpassed that target in a matter of days flipping [-A-] renters that had lost any hope of protection by their former masters. I would send cloaked campers into hostile renter systems, soften them up with a hot drop or two, and then shake them down for ISK. The velocity in which the ISK came in was shocking, as [-A-] renters eagerly lined up to hand over their ISK to avoid even a modest amount of wrath.

Figure 2. Tenerifis Diplomacy circa 2011 – “Give me your ISK and I will spare your life” 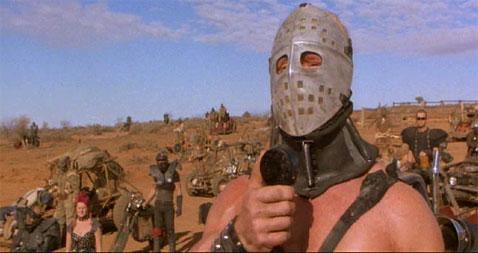 With my income goal met and only a fraction of Tenerifis rented, I started advertising on the  Eve Online forums, and in a few weeks I had surpassed the technetium income we had in the North. After Omist fell and was added to our rental portfolio, we achieved a peak income of about 60 billion per month.

That this property was leased in the middle of a volatile shooting war makes the cashflow even more remarkable. I rented some systems that we held for just a few days before [-A-] flipped them, and a few high end renters flipped back and forth between our rental alliance and [-A-]’s rental alliance, in some cases paying both sides 6 billion ISK per month at the same time while the front lines were on their doorstep. Had [WTF] consolidated power in Tenerfis and Omist, it would have stabilized a rental income between 150 to 200 billion ISK per month. If I could pull together 60+ billion ISK per month with [WTF]’s modest ability to project power, what kind of income could large power blocks achieve?

Most renters are players that, for whatever reason, cannot or choose not to pay the price of participation that would give them null access essentially for free. Such is their desire for nullsec content that they will pay large amounts of ISK for the privilege of being left alone in their ‘own’ patch of space. While most fit this “peasant” profile, all kinds of players rent, including ‘elite’ oriented PVP players whose primary game content is low sec piracy, high sec wardecs, or even nullsec PVP. This includes players who desire access to null ratting, mining, or industrial advantages, but want the anonymity that will keep their PVP characters untainted by their shameful carebear secrets.

Alliances that had previously enjoyed massive tech incomes have found themselves starting wars, taking space, and setting up shop renting space even when its somewhat out of character for them to do so. There is essentially one alternative: to seize and collect a massive count of R64 moons. However, moons will never again support the income they produced pre-Odyssey, and the administrative and logistic muscle required to harvest a moon empire is beyond the interest or capabilities of most alliances in game. As such, renting is in style more than ever.

Nothing demonstrates this shift more than the CFC’s recent announcement to reverse a cultural taboo against rental agreements and strike plans to make limited rental offers in CFC space.

(2:13:57 PM) directorbot: HORRIBLE EXPERIMENTS WITH PUBBIES: Due to the horrors of the Odyssey changes, we are now considering the formerly unthinkable: setting up a CFC-affiliated renter zone, where each entity in the CFC gets ~mad bux~ based on their participation. CCP seems to be forcing everyone into being serf-lords. Give me your best renter-alliance names in gfgbs, with the understanding that “Free Trade Zone” has sadly already been taken.

We’re also going to arrange a ~sales force~ where you can get a cut of the first month’s rent of any renter pubbiecorp you help us slot into their ghettoes.

When S2N Citizens was disbanded at the start of July, Nulli and Northern Coalition consolidated their rental empires into Northern Associates and are managing their rental income streams in an apparent partnership. In fact, the relative size of S2N Citizens and [NA.] and [S2NC] prior to July implies this arrangement was already in place. The N3 rental powerhouse is the largest rental entity in the game, booking over 780 billion ISK monthly, with a potential of well over a 1 trillion ISK, and over 4100 characters/customers in their block. I have no clear data on the smaller N3 alliances, so they were not included in the totals, but it is very likely that N3 rents an additional 70 to 90 billion ISK that goes directly to smaller N3 members such as The Unthinkables, Darkspawn, and WHY so Seri0Us. 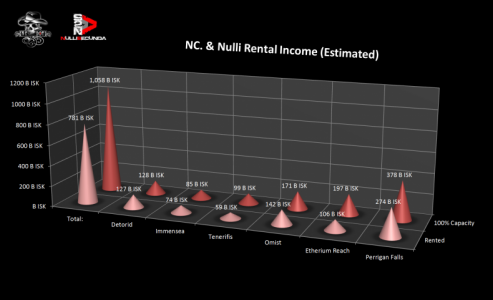 Though Pandemic Legion’s rental operation is smaller than N3’s, PL shares a massive income across fewer players. PL enjoys likely over 588 billion in monthly rental income across its 2,133 characters, while Nulli must service twice as many pilots with 33% more ISK in addition to SRP support for thousands of other N3 members during coalition deployments. 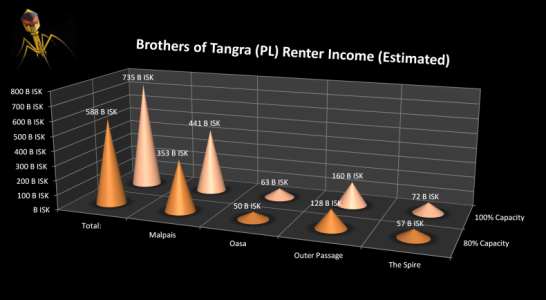 There are other players in the rental market, but the size and significance of them  drops off quickly. All in all, over 2 trillion ISK is exchanged by players every month in rental payments, and over 11,000 characters are in rental corporations. If 60% of those are alts, just under 4500 real human beings pay CCP and then pay other players to play Eve. 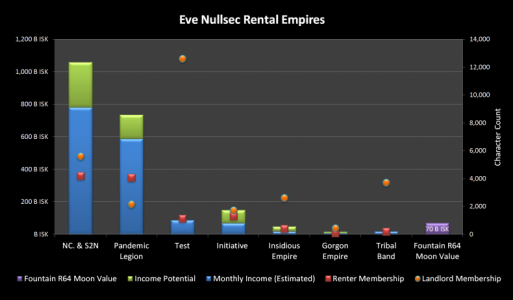 Figure 6 gives a good visual overview of the state of renting, and in comparison refutes the notion that the CFC’s conquest of Fountain will lead to a Goon hegemony in nullsec. Looking at these numbers, it is tempting to wonder why the CFC was slow to embrace rental agreements. After all, the 70B+ or whatever moon gold that rests in Fountain is nothing compared to the hundreds of billions that could be squeezed from renting any one of the CFC’s regions. So why not rent?

When you rent space, you tend to have to rent very good space that is rich with the things that players who actually live in nullsec desire. It is difficult to rent poor quality space to anyone at all, yet players line up for a decent -.6 Security or better system. In fact, much of the ‘untapped’ rental property shown in the charts fits into this low quality category. There is just not enough of the good space to go around.

Moreover, when you rent space you can’t do anything else with it. Your members can’t use it, and perhaps more importantly, neither can your friends. The players renting from you are not your friends. They are pilots filling up your space that share no common identity with you and would be just as happy sending their ISK to your enemies or flee at the slightest pressure such as they did in Tenerifis.

Do you fill your space up with players that care nothing for what you have built, or do you nurture relationships with competent friends, supporting them with quality space and resources to give them the chance to grow into committed and useful allies? How you answer that question tells a good deal about how you view Eve. While some alliances, such as PL, seem perfectly suited to renting, others show themselves to be short-sighted by embracing rental incomes too broadly. In the opposite extreme, any entity in nullsec that does not grasp the danger of a hostile 1 trillion ISK income stream places itself in a different kind of strategic peril. Careful balance and restraint from greed is vital when embarking on a rental program.

Progodlegend famously stated that N3 was created essentially to destroy the CFC. If N3 really means that, it will take more than piles of ISK or even comedy fleets of 100 Titans to achieve it. It will take coalition building on a grand scale, a common culture, and many more pilots that are willing to fleet up and who, in the aggregate, want to destroy the CFC more than it wants to live. These things are exclusive of renting most of your best space out to the highest bidder. Unless the CFC manages to implode from within, N3 will not achieve the shift in the balance of power it desires with fields of serfs and slaves. However, N3’s rental empire may well fund “gud fights” until the servers go dark, and that will probably be just fine with most of their membership.

Footnote on Data and Analysis:

The data presented here represents many hours of research in an effort to perform the most thorough analysis as is practical and possible on nullsec space rental in Eve. The sources used vary as different data sets exists for each landlord alliance and as such the methodology to produce various estimates can vary slightly based on available data. Examples of data sources used are:  Dotlan, landlord alliance public and semi-private spreadsheets, rental advertisements in the Eve Online forums, landlord rental rules and policy documents, various metagaming resources, and the author’s own experience in operating a rental program. Small errors and omissions are likely, but the overall analysis is sound and numbers accurately portray the scale and distribution of rental incomes in nullsec Eve. The data was gathered between July 20-24th, 2013.

This article originally appeared on TheMittani.com, written by Sebastian Hoch.

One of EVE's landmarks was destroyed early Tuesday mor...