New gameplay elements and features for Paradox Interactive’s upcoming sci-fi 4x grand strategy title Stellaris have been revealed. Paradox announced the title, which uses the same engine as Crusader Kings II and Europa Universalis IV, was in development in Summer of 2015. The company has stated that it wants to bring the nuance and depth of those titles to the 4x genre, with a focus on diplomacy and truly procedural gameplay. Among the new information highlights include Uplifting and Abducting Lesser Species, Fallen Empires, and FTL Travel.

From early information, it was already known that Paradox intended to take the normal cast of seven or eight races that are found in much of the 4x genre and greatly expand on the concept. It is often a recurring complaint that having limited races lowers replay value. In Stellaris, artists and developers have created a vast array of portraits, species archetypes, attributes, ethics, and randomized flavor text to ensure that each game is populated by a new set of actors.

The galaxy map in Stellaris will range from 200 to 1000 stars, allowing plenty of room for dozens upon dozens of unique species. Paradox has added a layer of depth to this by not only expanding the number of species, but the level of species. The first new level encompasses pre-starflight races, which come in three types: Pre-Sentient, Pre-Industrial, and Industrialized.

If you find a Pre-Sentient race in your travels, your empire will be able to invest in their genetic modification, eventually uplifting them as a sentient race. This can be useful, as certain archetypes can only colonize certain planets. Finding a species that is capable of colonizing water worlds, or act as shock troopers, can be extremely valuable. Uplifted species can be enslaved or integrated depending on the ethics of your government, but both come with challenges down the line.

Species that are Pre-Industrial or Industrialized come with even further specification. A race can range from bronze age to post-atomic in these scenarios. Stellaris will give you the option to quietly study them, invade, or even infiltrate these societies. You can brazenly abduct and probe the people of a world to get more research points, or quietly replace key members of their government to make them more pliable for takeover. You can even leave them be, but not all races will survive. In an alpha play-through, one post-atomic race had wiped itself out when the player came back to check on them. 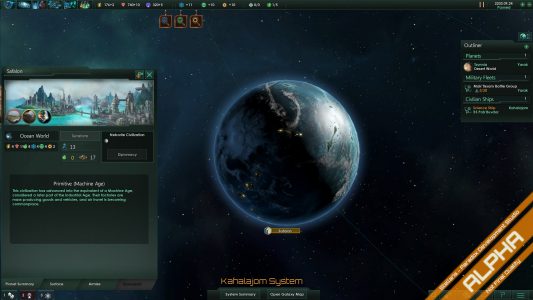 The Neborite civilization of the Kahalajom system destroyed themselves shortly after entering the Atomic Era a few decades after being discovered.

On the other side of the power spectrum, you will find Fallen Empires, which are akin to the precursor races you find in games like Halo and Mass Effect or shows like Babylon 5. In Stellaris, these advanced empires haven’t quiet faded away, but they are shells of their former glory. Where they once held hundreds of systems, they now only hold a dozen or so. It is difficult interact with these empires as they tend to skew towards being xenophobic.

Fallen Empires are larger and more advanced than the other races at the start of the game. They come with their own set of art and skins to give them an otherness from normal species. The game will be sophisticated enough that Fallen Empires can take umbrage if you colonize a world that was once sacred to them, even if it is no longer in their sphere of influence. Defeating them can get your race access to key technologies, or unlock terrible horrors.

From early screenshots, it appears that Fallen Empires will be large enough to block expansion in some cases, forcing some species to limit their development until they can overcome the obstacle. It will depend on how any given species uses FTL travel. 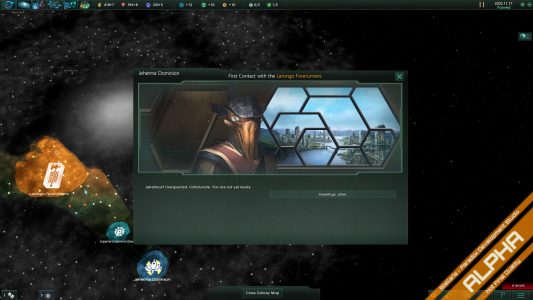 This empire most likely became Fallen after no one could figure out how to get food into their mouths.

In almost every iteration of the sci-fi 4x strategy game, there are base mechanics that are shared by all races and players. In Stellaris, technology will be structured or limited based on an array of variables. These range from your racial archetype, to the principles of your empire and government. In this way, the game will echo more of Crusader Kings, where playing as Pagans was different than playing as Christians or Muslims.

Even something as fundamental as faster than light travel (FTL) is varied. Fleets and combat will be an important part of the game, but Paradox is stepping away from the trend of customizing ships or micromanaging battles. Instead fleet combat will be automatic and the focus will be on strategy. There are three types of ways to move your fleet through the galaxy: hyperdrive, wormholes, and warp. Each comes with pros and cons. 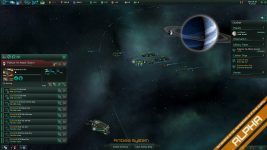 Hyperdrive travel uses a network of ‘pre-existing’ hyperlanes to allow the player to move forces about. This can be restricting as you are required to use a network and route that can be anticipated. However, it can come with advantages. Hyperdrive fleets can utilize the lanes from anywhere in a solar system, and are therefore unconcerned with gravity wells. This makes it more difficult to ‘tackle’ and eliminate the fleet.

If you don’t like using a hyperdrive network, you can choose to use wormholes. These allow you to move larger distances throughout the galaxy with a single jump, but rely on static wormhole stations to operate. Wormhole stations will take longer to prepare jumps, depending on the size of the fleet, and only one fleet may utilize a wormhole station at a time. This may create logistic nightmares when you are pre-staging an invasion or attempting to rush reinforcements to a besieged world.

Finally, there is warp technology. This requires every ship in the fleet to be outfitted with a warp drive, and thus causes the cost of ships to increase. Warp drive provides more flexibility than hyperdrive lanes, allowing you to travel to any star system in range. However, they do not have the range of wormholes and it takes time to make a sequence of jumps. Furthermore warp drive fleets can only move once they reach the edge of a system and escape a gravity well. The advantage, though, is that fleets can move in concert instead of waiting for a new wormhole to generate.

Paradox Interactive is taking the old bones of 4x and adding a level of polish and depth that we have yet to see in the genre. They will attempt to implement these and other creative features while not losing the core essence of empire management that has made similar titles so captivating.

Stellaris is expected to be released in Q2 of this year.

This article originally appeared on TheMittani.com, written by Anschau