For space scientists, the last few days has been a whirlwind of excitement, anticipation, nervousness, sleep deprivation and outright astonishment. New Horizons brings an era to a close, now that we have surveyed all the ‘classical’ planets. As ends of eras go however, this has been a truly momentous ocassion in what is the most exciting time of space exploration I can remember. The journey to Pluto may have taken 9 years, but the longest wait came in the moments before receiving the all-clear signal from NASA’s New Horizons spacecraft.

“Pluto New Horizons is a true mission of exploration showing us why basic scientific research is so important,” said John Grunsfeld, associate administrator for NASA’s Science Mission Directorate in Washington.

“The mission has had nine years to build expectations about what we would see during closest approach to Pluto and Charon. Today, we get the first sampling of the scientific treasure collected during those critical moments, and I can tell you it dramatically surpasses those high expectations.”

“We have a healthy spacecraft, we’ve recorded data from the Pluto system, and we’re outbound for Pluto,” mission operations manager Alice Bowman declared. “We did it! It’s just great!”

You have got to love those expressions! So very teasetastic the swines, but I cannot possibly blame them in any way shape or form for revelling in the moment and doubtless feeling smug for ‘Op Success’. New Horizons has not just met expectations, it has exceeded our wildest dreams and led to many bruised jaws, mine included. Charles White, to whom I spoke to on TheMittaniTV on Wednesday night, who I am sure you know is also The Harbinger of Faith, His Holiness Maximilian Singularity VI, Pope of New Eden proclaimed “A thousand years from now people will see this time as a Golden Age of exploration.” As part of the celebrations, a congratulatory message from Professor Stephen Hawking was shown to a delighted audience.

I watched the NASA mission announcement with bated breath and joined in with the collective sigh of relief on knowing all was well because probe had to go radio silent Its final contact was set for 03:17 GMT on Tuesday (04:17 BST; 23:17 EDT Monday). During the hours of closest approach, when it passed within 12,500km of the surface, New Horizons was simply too busy to talk to Earth. New Horizons followed a strict choreography designed to squeeze the most science possible from a 3-minute glance at Pluto and its moons. Signals from Earth take 4.5 hours to reach Pluto, so the spacecraft was on its own for the entire sequence. No time was wasted pointing the antenna at Earth until all the information was collected. The automated observation sequence saw it make hundreds of movements as it shifted every which way to point its cameras, not just at Pluto and Charon, but also at the lesser moons in the system: Styx, Nix, Kerberos and Hydra, as TMC previously reported. Only a few will be downloaded from the spacecraft over the next few days. The rest will take more than a year, 16 months in fact.

The team can’t wait. “If you think it was big today, wait until tomorrow and the next day,” said NASA associate administrator John Grunsfeld. This is the start of the mission, not the end. “As a team we have made history. This can never be repeated, this is in the history books.” 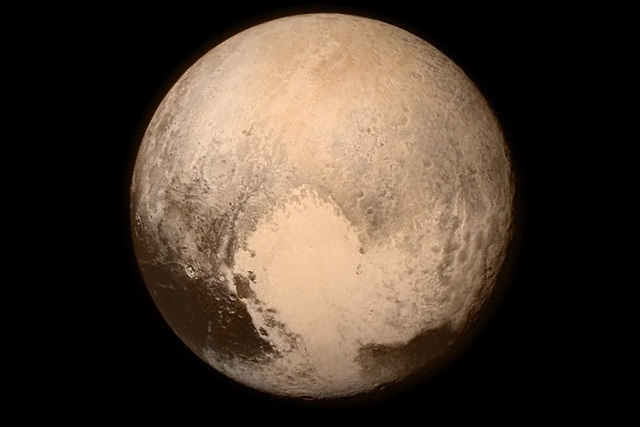 Pluto’s now famous heart, now renamed the Tombaugh Regio after its discoverer Clyde Tombaugh, whose ashes we sent on the spacecraft.

So! What have we learned so far?:

Pluto is bigger than we had previously thought, being 2,370km (1,473 miles) in diameter, making it the largest known object in the Kuiper belt. Eris is still more massive, suggesting Pluto contains more ice. It has a thin nitrogen atmosphere extending far out into space, and the surface colouring suggests it is a patchwork of different concentrations of frozen methane and nitrogen. These probably sublime into the atmosphere when the planet is closer to the sun and drift back to the ground as snowfall during colder periods. Pluto lost 300 metres to 300 kilometres of nitrogen since the start of the solar system. There must be internal activity dredging it up from the inside, like geysers or cryovolcanoes. They have not found them, but it’s strong evidence they should look for them. Pluto’s atmosphere escapes through a process that is only also found on Earth. Our planet lost its hydrogen and helium through hydrodynamic escape in the past, so Pluto gives us a way to look back to the early Earth. It also has applications to the loss of water from early Mars. So by studying Pluto we gain more information about the formation of our Solar system. 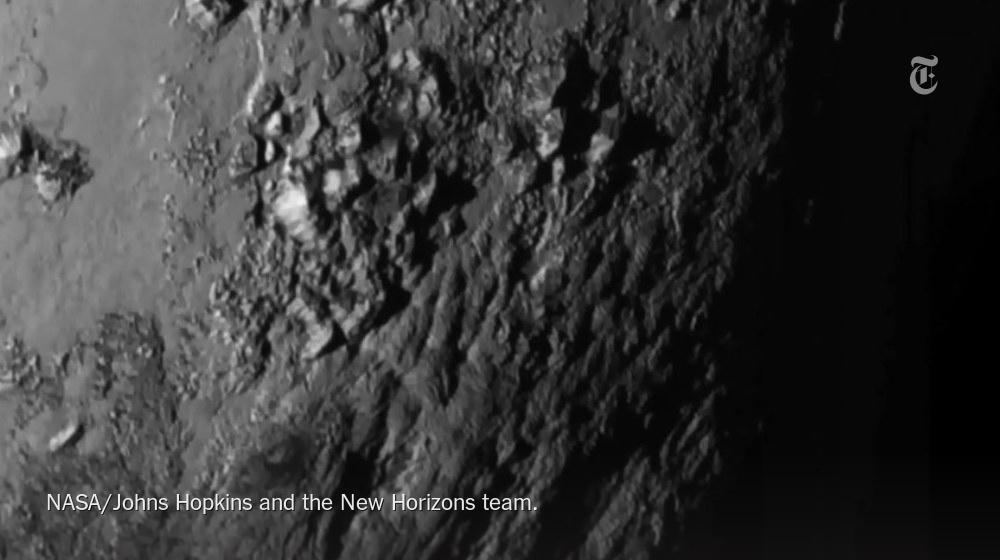 This is the first icy world we’ve seen not orbiting a giant planet. The others are moons around the gas giants, and they get deformed by their gravity. “That can’t happen on Pluto,” says Co-Investigator John Spencer. This is telling us that you do not need tidal heating from gravity to power geological activity on icy worlds. “That’s a really important discovery that we just made this morning.” They have found no impact craters yet. This means Pluto has a very young surface. It must be less than 100 million years old. It might be active right now! “This is just the first of the many amazing lessons from Pluto.”

“We now have an isolated small planet that is showing activity after four and a half billion years,” he says. They thought that would be the case having seen Triton in orbit around Neptune, but it was possible Neptune was powering activity on Triton. That can’t be the case on Pluto. “I think that’s going to send a lot of geophysicists back to the drawing board.” Said Stern. It is rather early to speculate, but maybe Pluto captured Charon only a few hundred million years ago (rather than billions), and we are seeing the effect of the very strong tidal interactions that would have ensued. Pluto could, in fact, even be geologically active today. There are huge ice mountains that equate with those on Earth, being 3000m/11,000ft tall.

The latest pictures from New Horizons have revealed yet another baffling terrain on the surface of Pluto: fresh icy plains that are less than 100 million years old, and could be even more recent.

“When I saw this image for the first time I decided I was going to call it ‘not easy to explain’ terrain,” said team geologist Jeff Moore in a press conference earlier today at NASA headquarters in Washington DC. “This could be only a week old, for all we know.” Some of these troughs are filled in with dark material, and others even contain small hills. It’s possible these shapes are created by convention within Pluto, heating and melting the surface likely a slowly bubbling pot of porridge. Or, they could be formed by contractions of the surface, similar to the processes that produce mud cracks on Earth.

“Who would have expected this kind of complexity?” said mission lead Alan Stern. “We can see that there are stark contrasts on Pluto in terms of the geology.” 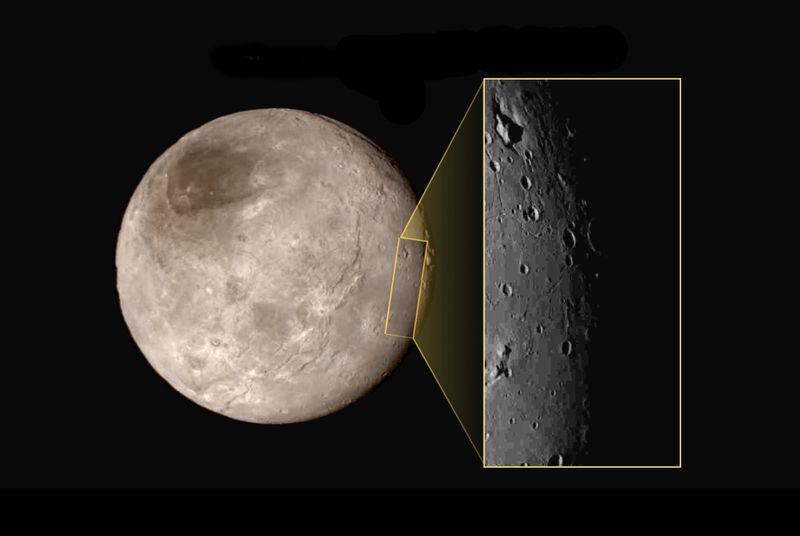 Charon too did not disappoint! Cathy Olkin said, “We thought it would be an ancient terrain, covered in craters. The new image blew our socks off. We are going to have to put our thinking caps on and understand what it all means. Going from the north east to south west is a series of troughs and cliffs. That’s just striking to me, it’s amazing to see this image.” They stretch for 600 miles across the moon. Just below is a region that is smooth, meaning it was perhaps recently geologically active. “At the 2 o’clock position there is a canyon. It’s about 4 to 6 miles deep!” There is another canyon on the other side and that is about 3 miles deep. “There is so much interesting science in this one image alone.”

What is powering the active geology on Pluto and Charon? We know there is radioactive material inside, as there is in most solar system bodies, says Spencer. There may be ways a body can store heat from its formation for a very long time through radiogenic heating. They could have an internal ocean that is very gradually freezing, releasing energy to the surface.

“Pluto must have silicate rocks inside, given its density” said Grundy. That means it contains radioactive elements. It was thought that a world this size wouldn’t get enough heat from those elements, but now we see that it can. Some of the surface of Pluto looks like a lava flow, on a much larger scale. It isn’t lava, but the process could be similar.

With so much data still to come from the New Horizons, we can certainly expect lots more surprises. Speculation is now rife about where it could go next, for example, to check out other dwarf planets in the Kuiper belt such as Eris or Haumea. We would most definately like to see those, however I personally am very much drawn to heading even further out, to the Oort Cloud and visit the mysterious object known as Sedna, a place which I will doubtlessly write about. For now though, I am going to celebrate the achievements of years of planning and look forward to more mysteries to solve! We at the TMC hope you have enjoyed our coverage of this event and you can sure we will keep the news coming.