NASA has. as predicted, chosen a new object for New Horizons to investigate this is most likeley to be be a Kuiper Belt Object (KBO) called 2014 MU69. It is further out from Pluto by about a billion miles and between 30 miles(45km) across. There will of course be a proper assessment before official approval so I for one will be crossing my fingers and toes for a go-ahead.

“Even as the New Horizon’s spacecraft speeds away from Pluto out into the Kuiper Belt, and the data from the exciting encounter with this new world is being streamed back to Earth, we are looking outward to the next destination for this intrepid explorer,” said John Grunsfeld, astronaut and chief of the NASA Science Mission Directorate at the agency headquarters in Washington. “While discussions whether to approve this extended mission will take place in the larger context of the planetary science portfolio, we expect it to be much less expensive than the prime mission while still providing new and exciting science.”

“2014 MU69 is a great choice because it is just the kind of ancient KBO, formed where it orbits now, that the Decadal Survey desired us to fly by,” said New Horizons Principal Investigator Alan Stern, of the Southwest Research Institute (SwRI) in Boulder, Colorado. “Moreover, this KBO costs less fuel to reach [than other candidate targets], leaving more fuel for the flyby, for ancillary science, and greater fuel reserves to protect against the unforeseen.” 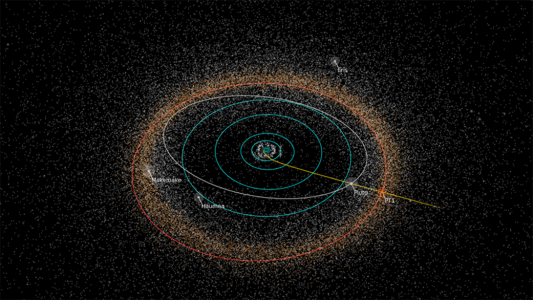 The object, because of its size and distance from the Sun, will have retained its original composition from its formation 4,6 billion years ago and will hopefully giev scientists a snapshot of the Solar System’s early history.

“There’s so much that we can learn from close-up spacecraft observations that we’ll never learn from Earth, as the Pluto flyby demonstrated so spectacularly,” said New Horizons science team member John Spencer, also of SwRI. “The detailed images and other data that New Horizons could obtain from a KBO flyby will revolutionize our understanding of the Kuiper Belt and KBOs.”

The spacecraft is in good shape and will head on out of the Solar system and will continue to transmit until it runs out of fuel. I personanlly hope that with a little more reprogramming, they could send it to Sedna, a mysterious object way out in the Oort Cloud. We will, of course, keep you updated spacefans!