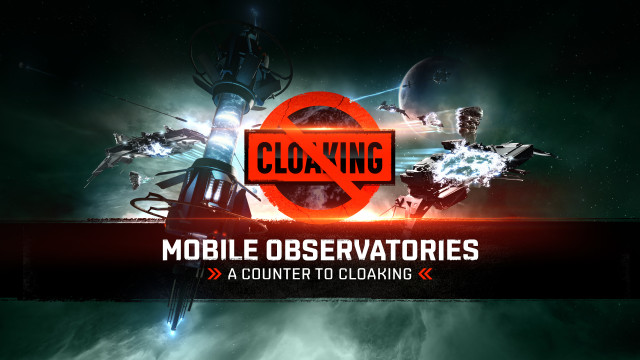 The map of New Eden now includes a lowsec gate to Stain. On Tuesday, June 8, CCP deployed Patch 19.05 to Tranquility. It officially added to the game the anti-afk cloaky camping Mobile Observatory modules and the four new Stargates first teased on April 1—most notable among them, the gate to Stain.

Patch 19.05 brings several changes designed to reduce the effectiveness of AFK cloaky camping. First announced almost a month ago, Mobile Observatories are a deployable object that once anchored will send out a system-wide ping every ten minutes that has a 40% chance to uncloak any vessels that have been cloaked for longer than 15 minutes. Their BPOs have been seeded, and they are expected to be appearing in space soon. Improved counters to AFK cloaky camping were a frequent player request, and CCP Rattati hinted in an April 17 interview on the Meta Show (1:00:18) that improved counterplay options against cloaky camping were in the works. “I would like Intel to be more play-counterplay . . . That’s why we are investing in the deployable strategy to put things (anti-) in space. . . . That’s where we want to go, and that’s where Intel is also going. We’d love to have more tools than just Local to have proper Intel gameplay,” he said at that time.

Mobile Observatories have been available for player testing on Singularity since May 17, and though now live, CCP has indicated that tuning of their effects may continue based on how they affect the game. In a developer comment on the patch notes, they specifically mentioned that the amount of time a ship is immune to Mobile Observatory pings after activating their cloak (currently 15 minutes for all ships) may be tuned based on ship class or other factors.

Lowsec Gate to Stain (and Others Too)

With Patch 19.05 the new lowsec gates first teased on April 1 are officially part of the map of New Eden. These four gates were formally introduced by the Stargate Trailblazers event which ran from May 25 to June 3. In that event it was announced that the four empires were each creating a new stargate link, and special mining sites spawned near the new gates’ locations. Players who wished to do so were able to “contribute” to the effort of building the gates by mining resources. The event also featured mining-related daily login rewards.

A lowsec gate to Stain has been such a long-standing player request that it had effectively become a meme. When CCP first teased the coming gates on April 1st with the headline “Gate to Stain Under Construction,” it was widely assumed to be an April Fool’s joke. However the story stayed in the EVE launcher long after April Fool’s, and then in May CCP released additional details and ultimately the Stargate Trailblazer event which made it clear the meme was becoming reality.

With the long-awaited addition of a lowsec gate to Stain, the most vocal proponent of the change, StainGuy, announced on the r/EVE subreddit that he would be biomassing his character as promised. He will continue to play EVE, but StainGuy is bound for Doomheim, and after 6 years and 95k+ Reddit karma, the u/StainGuy account will no longer be posting. On Tuesday he made a final “thank you” post on Reddit and announced that StainGuy will log in one final time at approximately 16:45 EVE on Wednesday on the Stain side of the new gate for anyone who wants to get a chance at his last killmail and corpse.

Gwailar first tried EVE in 2008. In 2016 during the Saranen hellcamp he joined Karmafleet. An analyst by nature, he focuses on the strategic and metagame aspects of EVE. If you like his writing, he likes ISK. Tips are welcome.

After WWB (Beeitnam) ended, the question was in the ai...

Through September 24th our illustrious GMs will hold a...