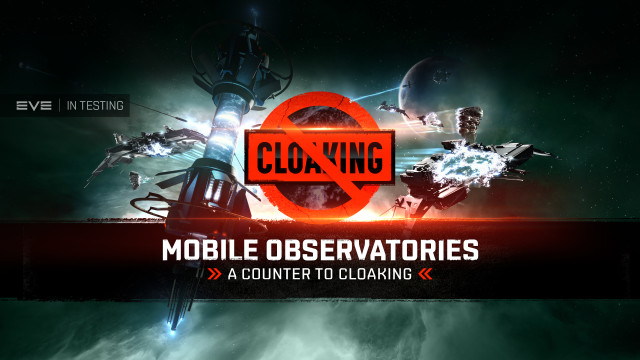 On May 17, CCP announced a new deployable designed to help counter AFK cloaky camping: Mobile Observatories. This announcement comes after a number of hints and teasers in previous interviews and devblogs. Mobile Observatories are a relatively inexpensive, easily-portable deployable item that have a chance over time to automatically decloak any cloak ships in a system. They cannot be deployed to highsec.

Mobile Observatories work by sending an instantaneous “ping”, similar to active sonar, every 10 minutes. This ping affects the entire system and has a 40% chance to decloak any ship (friend or foe) that has been cloaked for more than 15 minutes. Ships that have been cloaked for less than 15 minutes cannot be decloaked by a Mobile Observatory. Up to 10 Mobile Observatories can be deployed in a system at any one time, meaning that if someone is willing to pay the cost, an average of up to one ping per minute would be achievable. Being decloaked by a Mobile Observatory is exactly like being decloaked by proximity to an object or another ship. Decloaked ships can cloak again as soon as their decloak timer wears off and suffer no other ill effects.

Below is a list of all key features of Mobile Observatories as currently configured on the EVE test server Serenity:

It seems the primary purpose of these deployables is to allow AFK cloaky campers to be scanned down and found. Active campers will likely be very difficult to catch by this module, as a player can warp to a safe to quickly uncloak and recloak to reset their timer. And if uncloaked, they can simply recloak. However the 15 minute time limit may introduce some additional logistical challenges for slow-moving cloaked travel groups.

Mobile Observatories are live on the Singularity Test Server, and CCP has opened a feedback thread on the EVE-O forums.