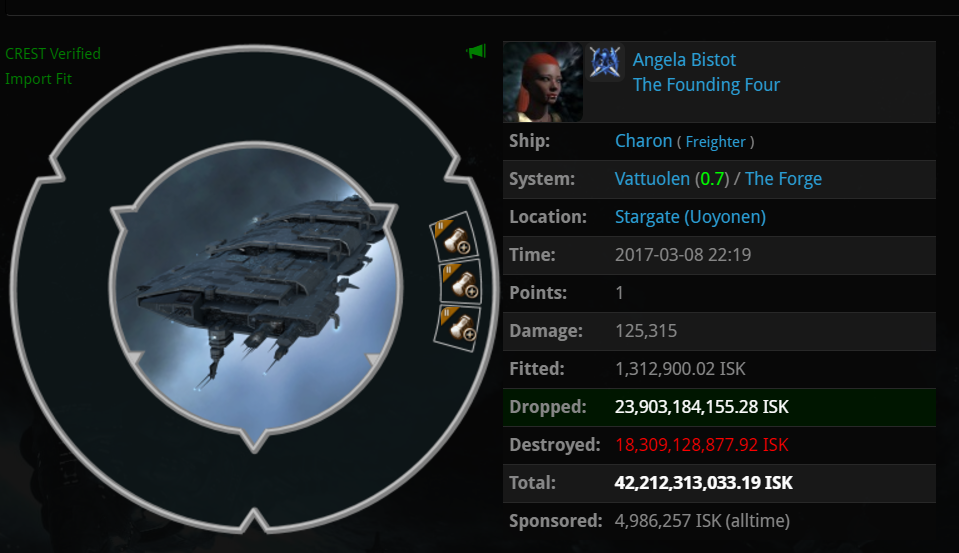 Those of you who don’t live in a hole, or who are at least quasi-aware of the workings of space trucking, know that the Highsec ganking arm of the Imperium is The Ministry of Love: otherwise known as “Miniluv”. These fine Ministers are the cream of the crop as far as Highsec ganking is concerned, and they proved that again on March 8 when Ministry Fleet Commander Joe Painter, along with a group of Ministers, downed a Charon that was worth an estimated 56.5 billion ISK.

This freighter was loaded to the gills with all kind of BPOs, BPCs, Tech II items, Deadspace Items, Faction Items, and more. You can view details of the kill by clicking on this link. The killboard shows a lower amount, but after taking the BPC’s and BPO’s into account, the freighter’s value was pushed over the 56.5 billion mark.

I spoke with Joe Painter, the FC of Miniluv, and asked what his first thoughts were when the fleet started to form for this “whale”. He said, “When we formed we didn’t even look at the value much. From the Evepraisal we were expecting a 12 billion ISK freighter so it was a pretty standard gank. Only after we killed it did we realize how much it was worth”.

Joe also commented on the support aspect of the gank, “Without our support we would never find these huge whales: big props to Viserion Pavarius for scanning this overstuffed freighter.”

When I attempted to reach out to Miniluv director BoneyTooth Thompkins ISK-Chip, he was unavailable for comment.

Events like this, and the coordination of Burn Jita, continue to show why Miniluv is the prime ganking group in EVE Online. And, while 56.5 billion is a large figure, it is interesting to note that this is still not Miniluv’s biggest kill. Their biggest was in 2015 and worth over 68 billion ISK. To this day, Boney and the rest of Miniluv are constantly on the lookout to break that record.

I am the Bishop of Burn Jita, Minister of Love, itinerant Space Priest and all around nice guy. I enjoy the less "friendly" pastimes of EVE Online and reporting on the same.