Good evening and welcome to the liveblog for the final timer at 9-4RP2. This is the hull timer on the Pandemic Horde Keepstar that Imperium put into reinforced last week.

Any terrible English tonight is to be blamed on the flu, so apologies in advance.

The fight will be streamed over on INN Twitch, where Dirk Macgirk & Matterall are joined by a wide range of guests including Gigx, CCP Falcon, Grath Telkin and Seleene.

We have had some early pictures come in from our space photographers Shingly (first two images), and Rose Knightley. 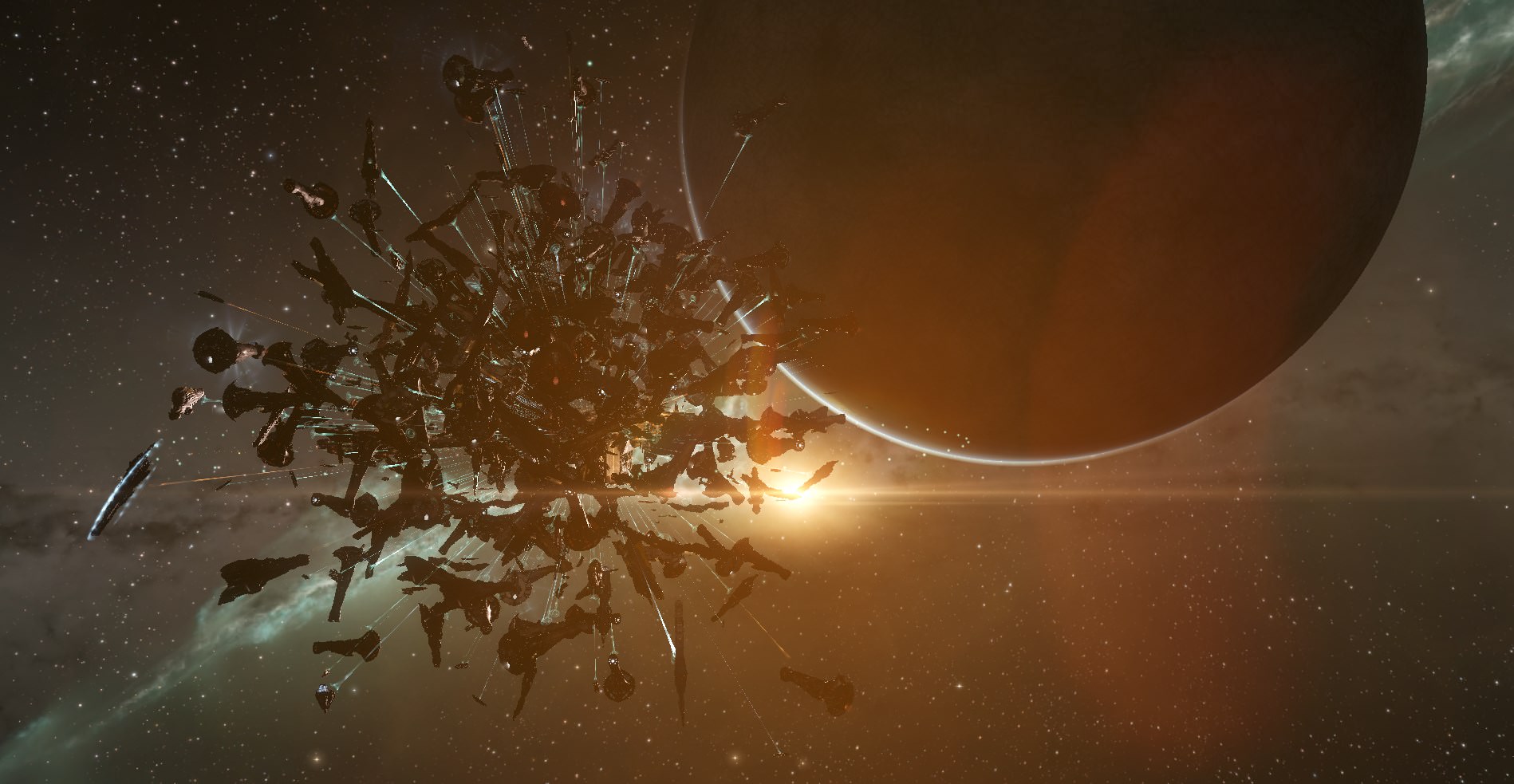 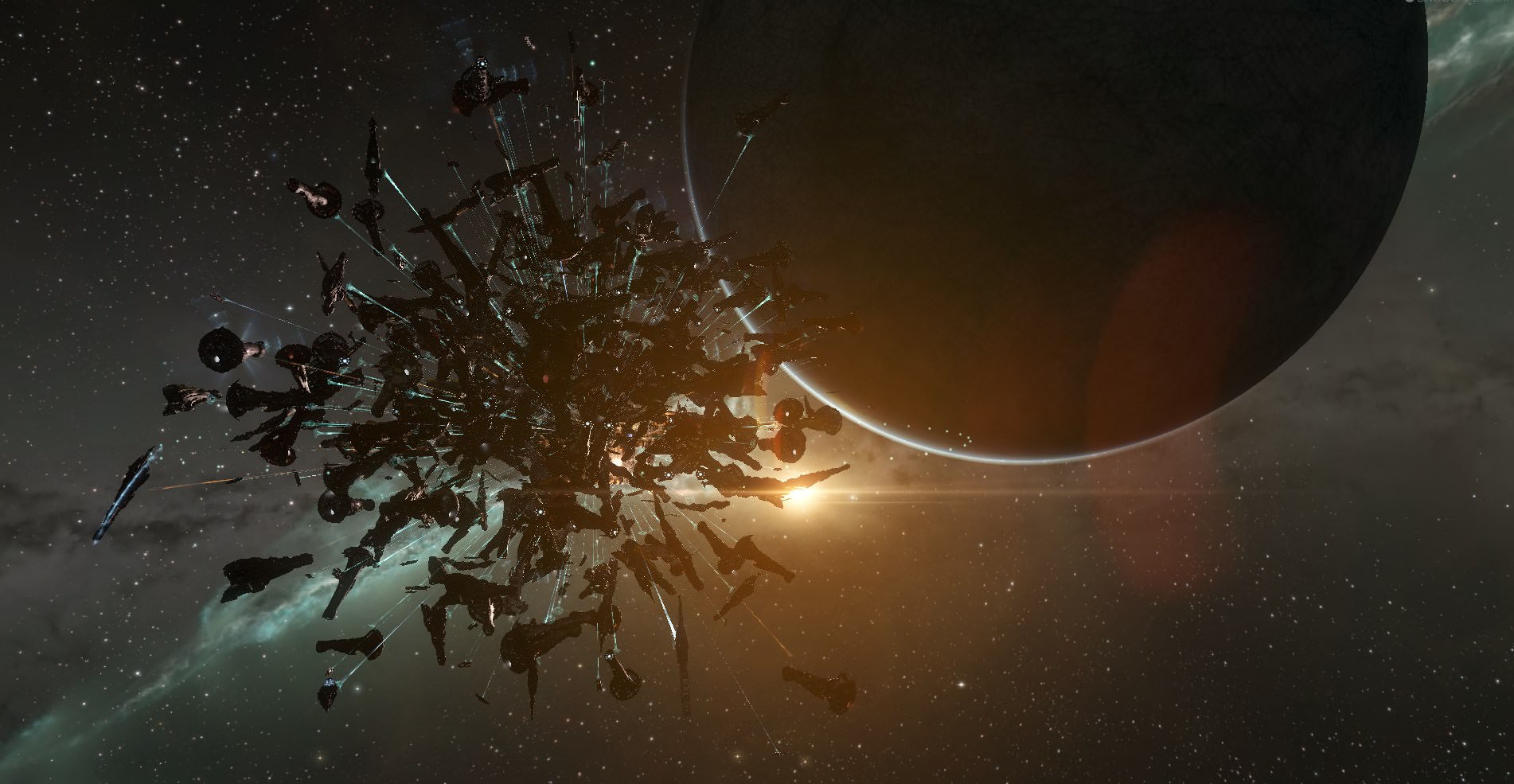 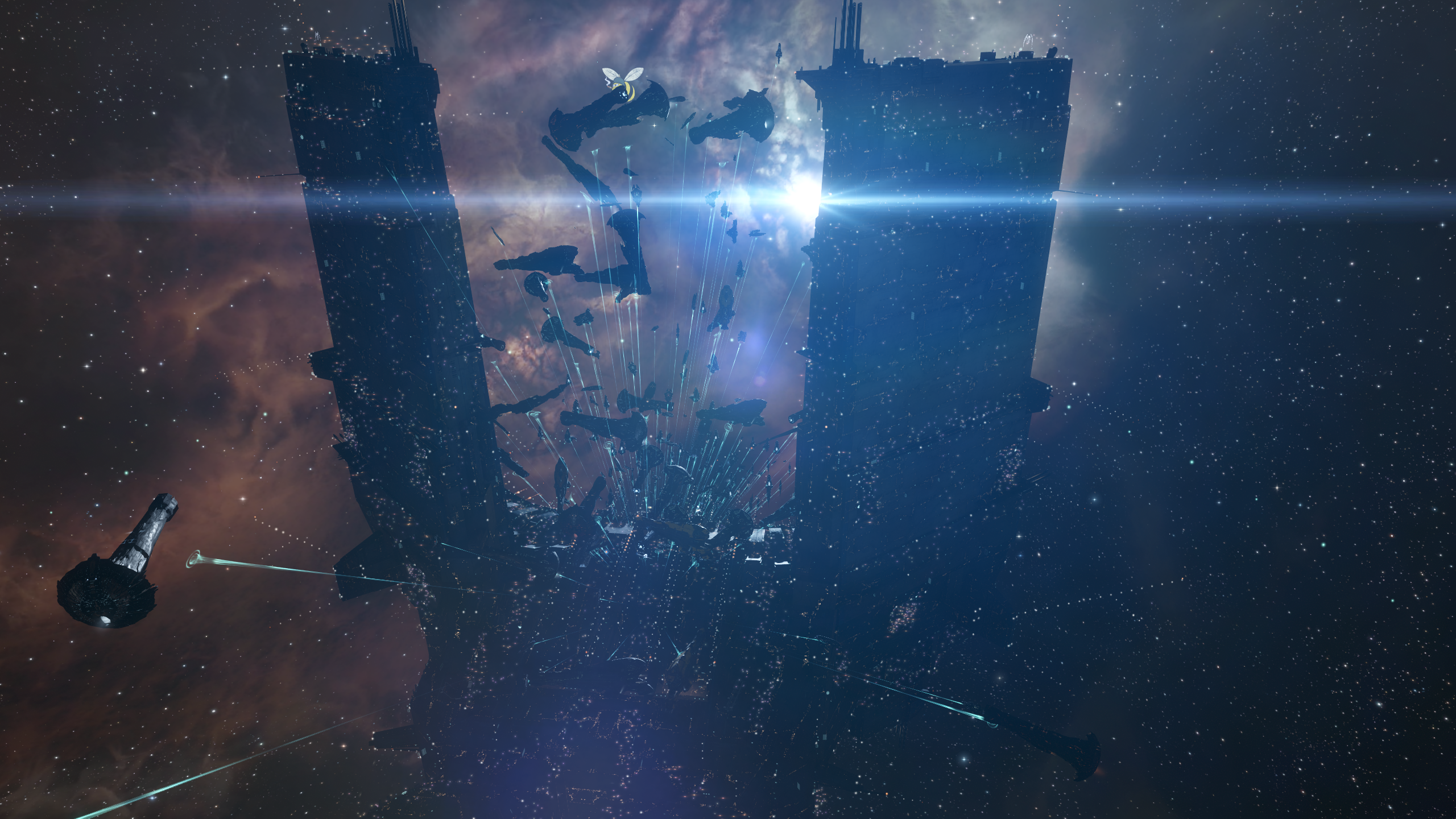 Expect it to be quiet on the blog for the next hour, until the timer, but I will try to find things to update you with in the meantime.

2105: We are hearing that some Goon Nyx have jumped to what appears to be a…faulty cyno….and landed themselves on the Keepstar.  Zkill has not yet updated, but we will provide links when it does.

2123: Server is struggling, 5188 in local, people are reporting cynoing in to emergency warps (Similar to when you reconnect while in space). Bomber fleet FC Sothrasil has this quote for us from Golakka in his fleet explaining bombing in 10% TiDi: “It’s like playing chess, completely immersed in honey”

2127: So far, only 1 Northern titan on grid, overview full of supers. A good mix of Aeon and Nyx from all involved Northern forces. 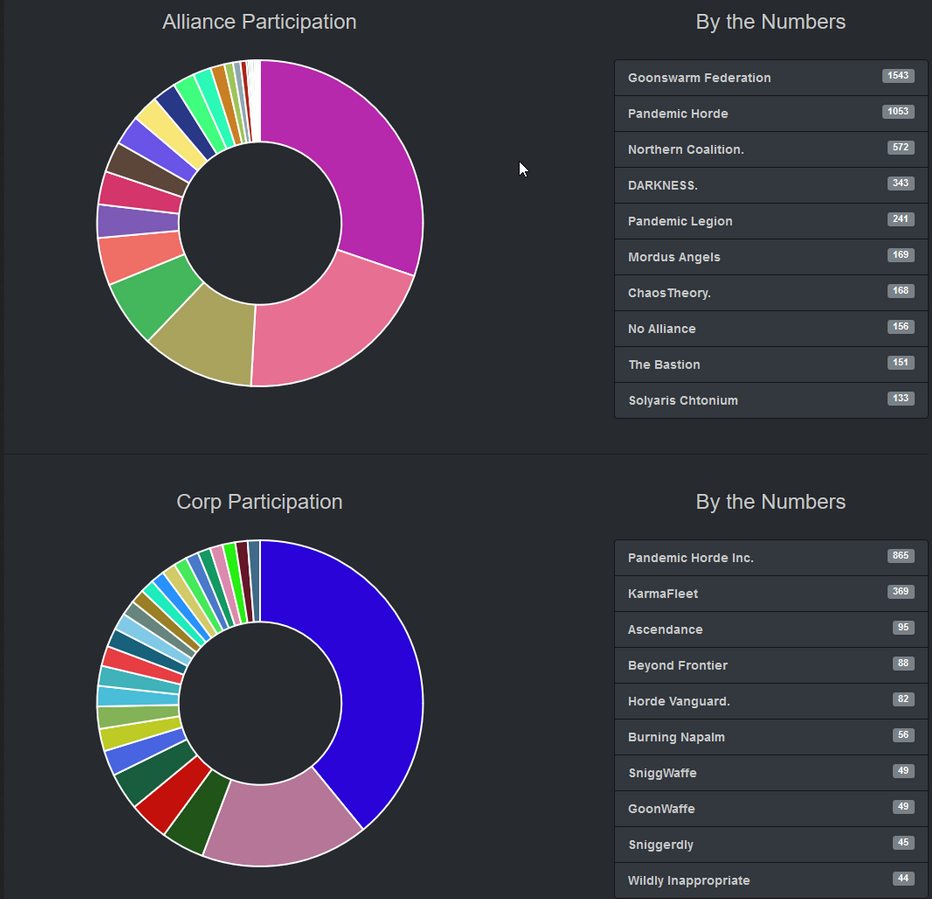 The other Nyx losses have popped up on zkill now. One from Theslayer and one from Heather Mordil.

2138: 17m until the timer, Imperium fighters are making their way across to the Keepstar.  They may have left it too late to launch them, with the TiDi in effect.

2148: 6 minutes on the timer. The Mittani spotted on field in a Wyvern!  Tidi still hell, potato mode not helping at all.

2152: 2m30s on timer, local at 5780.  Looks like both sides are sitting in tether on their respective structures, having a battle of the fighters.

2155: Aand, we are off! Very slowly of course.  Remember, the timer ticks down in real time, not TiDi time.  CCP Fozzie recently explained that this was due to TiDi being measured on one node only, while repair timers are across several nodes.

2201: Still repairing, 9m 45s on the timer. Fighters still making their way across. I turned on all brackets. This seemed like a good idea at the time. It was not. Do not do this.

Server seems to be having issues. From local chat

[22:01:16] The Mittani > fyi we’re shooting the keepstar and fighting but nothing has fired yet

2203: Timer still going down.  There are reports of issues locking the keepstar (due to TiDi)

2205: Ok, this was really weird. Timer was about 6m30s. Now it is paused, and timer is 8m45s. Servers are not happy. Anyway, attacking is now underway.  Let the battle of the fighters (and Scorpions) commence

2209: We have another image from Shingly. In 9-4, Xenuria is contributing to the lag by promoting his CSM campaign. Laztel, Elise Randolph, The Mittani are all in local. Karaoke potential is high. 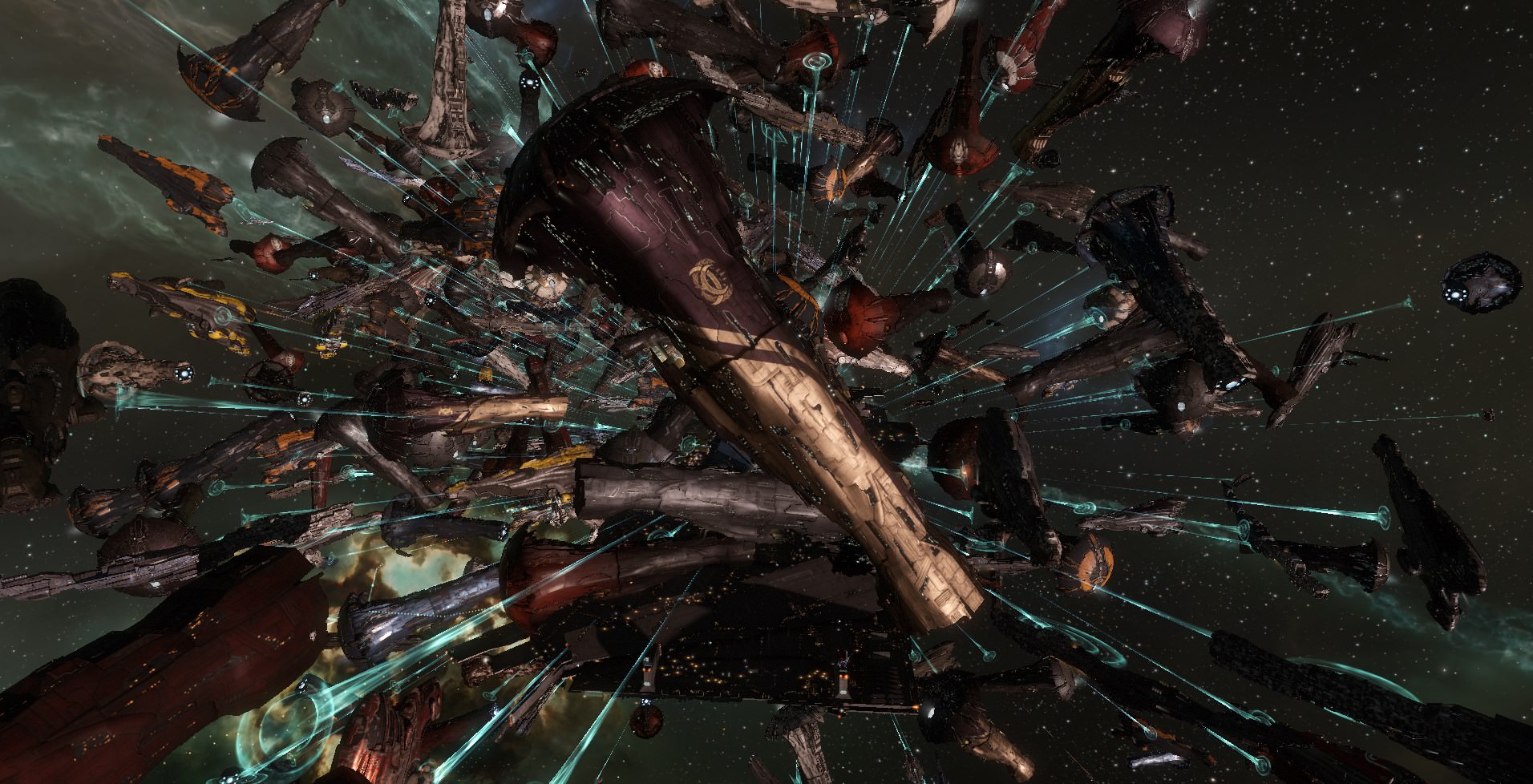 2215: Much excitement! Keepstar has lost almost 1 bar of hull….only 9 to go! Horde have around 600 scorpions out and about. They will be trying to jam the fighters to stop them attacking the Keepstar.

2220: NC Titans have arrived in local. I would screenshot, but my client is not co-operating. Mostly Erebus and Aeon. There is at least one Vanquisher on field. There is a ball of light-fighters heading towards the Imperium jackdaw fleet. People in the Jackdaw fleet are reporting unresponsive clients (as most of us are), and unable to activate prop-mods.  Once again, fights in max tidi are about how lucky you get with modules activating, and locking.

CCP Falcon has confirmed that the numbers in system are a record (that was 5300).

Update: The light-fighters seem to be going for a small group of 5 or so Imperium fighters.

2230: Unable to give updates at the moment. Client is going unresponsive every time I click on something. I will try to reboot (RIP) and hopefully be back in system shortly.

Grath on INN Twitch has just reminded everyone that one of the issues with server load right now is the sheer number of fighters employed by each side.  While there are 5700 in local, there are also a large number of fighters deployed. These are of course having their own commands to the server.

2237: Imperium supercarriers are de-tethered on the Fortizar. This means they can be attacked. Boat has joined the INN Twitch. Head over there for commentary from Grath Telkin, Seleene, Harvey Skywarker, Vily and Gigx.

2239: Boat has reported that the Keepstar has fired its Doomsday, but it only hit a few Machariels. It cannot be used again for around an hour. XIX have turned up in a confessor fleet, and are assisting NCPL. My client is still trying to log back in.

Taking a break for now from the liveblog. Head over to INN Twitch for keeping up to date on what promises to be a tidi-marathon.