It is 0800 EVE-time. Imperium forces have gathered in their staging system to form up for the kill of SH1-6P Keepstar. While waiting for the form up, Imperium fleets have killed 16 Astrahus, 2 Athanors, 2 Raitaru, and 2 Sotiyos. After this short warm up, the Imperium forces jump to SH1-6P. Capital and supercapital ships, starting with a supercap fleet from the Initiative, begin firing on the Keepstar.  At the same time, a number of sub-capital fleets cleanse the system of another two Astrahus and an Athanor. Throughout, the closest thing to a defense is the keepstar gunner, and a small camp of Hecates. 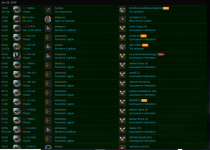 With over 1,000 pilots shooting the keepstar with around 200 capital ships the keepstar did not resist a lot. While the Northern Coalition. (NCdot) fleet chose not to defend their keepstar, they launched numerous DD volleys, killing a Moros, Thanatos, and Apostle. The final blow came from FaceLikeDrownedGuppy at 9:45. Reports say that he felt pretty cool to add this juicy kill to his killboard. Again, it seems that despite the keepstar belonging to NCdot it was fitted by Pandemic Legion, as it had no rigs. 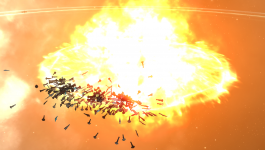 New Allied Forces for the Imperium?

Darkness. Alliance was present to enjoy this kill and helped the Imperium forces in clearing the system. However, Darkness. have a negative standing toward the Imperium forces and overviews were blinking orange and red. Despite this, fleet commanders have done an incredible job to keep everyone safe. It seems that numerous alliances are starting to rally up to the Imperium forces to end the NCdot era. Perhaps we will see some standing change in the coming days.

The Train Rolls On

Following the SH1 strike, Imperium forces continued to pave the region clear, even after downtime. A further 4 Astrahus, 4 Athanor, 2 Tatara, an Azbel, Sotiyo, and a Fortizar, were all destroyed in Tribute and Vale, as well as entosis structures. INN will have additional reports of the campaign’s progress as it continues.