Jin’talks – Why Do Autocannons Suck?

It is common wisdom amongst the player base that Autocannons are underpowered. This has been the general consensus on r/eve and EVE-O forums for a good while, yet no projectile weapon changes have been announced by CCP. As such, I feel it necessary to restart the discussion on their balance state. To do so, I’ll bring in hard facts on what people perceive the problem to be on a mechanical level, and what I think might be done to address it.

What Are Autocannons Supposed To Do?

Autocannons are supposed to have 4 key points which define it as a weapon system on paper; 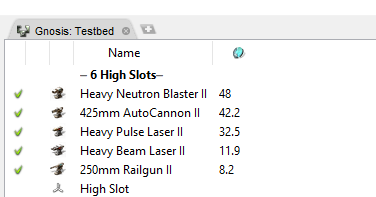 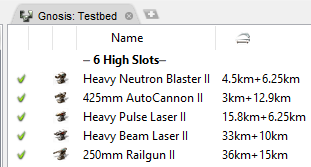 The last of these advantages is the only one I cannot really argue with, as it’s one of the main reasons I’d consider using Autocannons on a fit at a fleet level, if the fitting costs of the utility on the ship is so steep that I cannot use Artillery.  It’s a strong hidden advantage in the system, and it’s not one to be underappreciated.

The other three however, are things that Autocannons (of all sizes) are provably worse at than their near peer competitors in terms of close range turrets.

As demonstrated in this amazing infographic, Projectile Ammo gives a huge variety of options with which to load your weapons. However, any form of mid-fight adaption to changing circumstances is—almost as a rule—never worth it in a solo situation, except if combined with enough tank to stay on the field near permanently. I don’t think I need to explain how winning more in that circumstance is a negligible advantage. 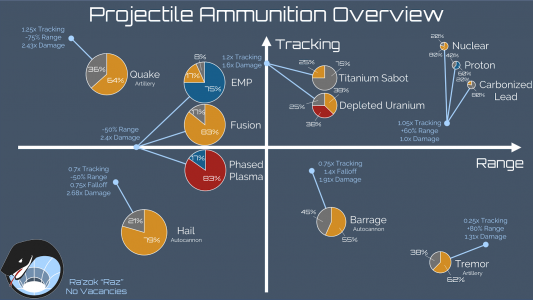 For example, let’s take a basic example, where you find yourself in a Rifter with 200mm AutoCannons fighting a Breacher, who is kiting you with a scram and a web and as such has range control on you. This allows the Breacher to orbit you safely at 8km, within their unheated scram range and allowing for a little bit of safety on their part as they attempt to whittle you down. 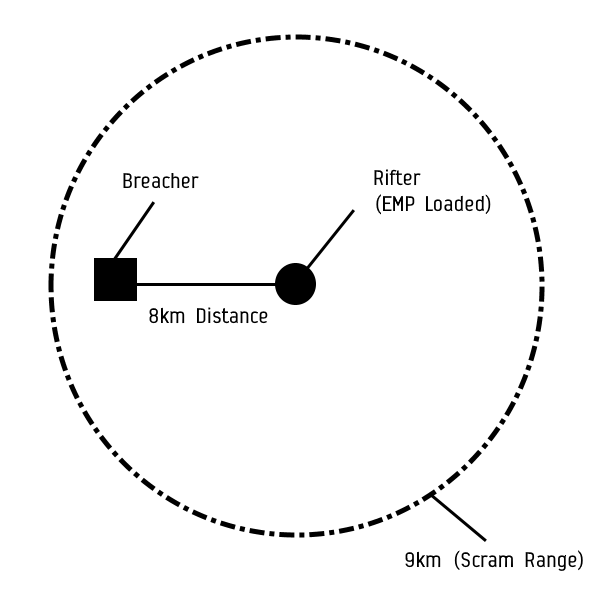 At this range you’re doing 77 DPS with the close range ammo you had loaded originally, only a little over half your paper DPS.

As such you might consider changing to your long range ammo – Barrage;

However, in order to deal that 7 extra DPS, you had to stop firing for 10 seconds, missing out on 770 points of raw damage. In order for you to recoup this loss in damage due to gun downtime, the fight would have to last 110 seconds – Just short of 2 minutes.

This is due to a nerf to Barrage that was hidden in the Tiamat release. That nerf reduced the falloff bonus of Barrage from 50% to 40%, alongside a 7.5% bonus to base falloff for all Autocannon, in order to give Projectile weapons less reliance on their T2 ammo. In reality all this did was make Barrage hopelessly situational vs faction close range ammo, and almost never worth reloading to in a fight except if in a situation where you’re already almost certain to lose the fight due to being held outside of your optimal engagement range.

The 10 second reload that makes adaption a poor choice is not only a problem with the T2 ammo. The same issue comes up when dealing with changing damage patterns in order to try and shoot into known holes on your opponent’s ship. For example, say you’re fighting an Atron with an ancillary armor repairer and you start the fight with Phased Plasma (which is the best all-around damage pattern) loaded.

As you can see this means that the ancillary repairer will add 2.26k EHP to the ship over the course of its charges vs this specific damage pattern, as it focuses on Thermal and Kinetic—the joint second highest resistances the ship has.

If we could deduce this immediately and opt to try and reload to Fusion in order to take advantage of the major Explosive hole in the ship, we’d see the following results;

The change in damage pattern means that the Atron loses 550 EHP from its decreased armor repair effectiveness vs the damage received, but also gains 100 EHP total due to the base shield EHP of the ship and its natural explosive resist there. This means that in total, the ship now has 450 EHP less, however it has taken 10 seconds in order to do that.

That means that the fight needed to be somewhere in the region of 45 effective DPS for this ammo switch to be the correct choice, which is a circumstance in which I’d expect our poor Rifter to lose anyway, although it would also decrease the effectiveness of non-charged repper cycles as an additional bonus.

Even having the correct ammo loaded before the fight begins is not enough to allow an Autocannon based ship to gain a meaningful advantage on the battlefield. To give an example of how unbelievably god-awful the effective DPS projection of Autocannons is, I present to you a comparison between a Hurricane fit with 6 425mm Autocannons fit, and one fit with 6 Heavy Pulse Lasers fit, with the key 16-24km engagement range (within cold point range, outside of heated & boosted web range) highlighted;

As you can see, despite a 25% bonus to damage, a 25% bonus to RoF AND a 25% bonus to both optimal range and falloff, all from the hull, Autocannons still fall behind Pulses in DPS at this range. If that doesn’t demonstrate a problem with Autocannons, I don’t really know what does.

This lack of raw DPS at any meaningful range then translates to making the supposed good application that compensates for a lot of its other failings is in reality not borne out. This means that not only do Autocannons not apply worse vs a still target (as all other calculations have been done vs for simplicity);

They are also worse in terms of effective DPS vs a moving target. For this example I used an unboosted ABing Maller with a single plate moving at a 45 degree angle as the target;

And for a second example, an unboosted fleet fit Sabre moving at 90 degrees at max speed;

This is the first time we can really see 425’s start to creep ahead in effective damage dealt, however the differences are relatively negligible – And the Autocannon’s advantage in damage trail is negated by the ability for the Pulse user to immediately switch to an ammo with more projection, such as Standard;

The traditional counter argument given against the need for changes to this weapon system can be neatly encapsulated within the information contained within this graph provided to the public by CCP, circa Jan 2019; 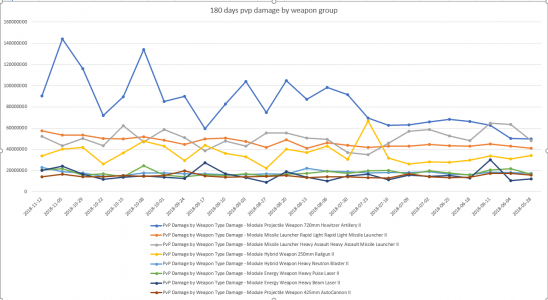 In which Autocannons are not significantly below any of the two other close range medium weapon systems in overall damage dealt. This is, however, an argument to popularity. I would posit that in large part this damage graph is being held up by ships that are good despite the weapon system, in spite of because of it, especially given how far above the norm the other projectile weapon system (720mm Artillery) is, which indicates it has been found to be an optimal weapon system for fleet combat in conjunction with the ships available to use it.

As such, I strongly believe that Autocannons deserve some form of buff in order to make them a more viable platform, and in order to allow projectile ships to remain relevant if nerfs to platforms such as the Loki, Hurricane or Cynabal (the 3 major medium autocannon users) or to 720mm Artillery are dealt out.

In order to give some idea of what could be done to give Autocannons more of a niche without overhauling the weapon system, or pushing other weapon systems out of viability, I’ve decided to compile three possible solutions. I want to stress that I don’t think all of these should be done simultaneously, but have presented them to start a conversation on what could be tweaked outside of simple numbers changes, as those are unlikely to be a healthy long term solution to the problem.

The first solution which I would propose would be to provide Autocannons a T2 ammo with more substantive use cases than Barrage or Hail. This is under the assumption that the 10 second reload timer is a disadvantage CCP wishes to keep in play, in order to force Autcannon pilots to commit to their ammo choice for a fight.

Personally I would suggest reworking Hail into something closer to the Depleted Uranium ammo it is based on in terms of range, with a 0% range bonus, but a more substantial tracking bonus (1.25x~) and a higher base damage (0.8x~ close range ammo), whilst retaining the disadvantage of Kin-Exp locking damage output.

This would give Autocannon using ships an ammunition type which is useful both at close and long range, as the application bonus will aid in in-optimal fights, whilst the lack of a range penalty allows it to take better advantage of any Tracking Enhancers or other projection modifiers fit to the ship if being kept at range. This means that there’s a better ‘generic’ option to have loaded at the start of the fight, improving in-fight play, whilst keeping the option of pre-loading a different, situationally better ammo type in response to intel gained before the fight from scouting/dscan.

Another way that has been suggested (by Suitonia) to improve the viability of Autocannons in shorter engagements whilst keeping them less effective in longer fights, where the utility allowed by greater fitting space can be of assistance, would be to increase the damage bonus offered by overheating Autocannons from 15% to something higher, such as 20 or 25%.

This is something that theoretically should be a simple solution, and minimise the impact that any increase in potency gained in Autocannons to purely the small gang ecosystem, due to the fact that heat is a factor which is more difficult to gain an advantage from in a fleet context.

The quickest and dirtiest way to bring Autocannons up to snuff is something that CCP has done previously for another weapon system, when it was significantly behind the pre-TE nerf projectiles in 2011: Simply reduce the reload timer. In this case, though, it came with a raft of other buffs to both the ships using them, ammo, and several other things.

This would certainly help minimise the issues described with versatility. Although it wouldn’t address some of the other weaknesses, it would at the very least give Autocannon users the option of being mediocre at most ranges after a short delay, instead of having to really focus in on what range they wish to be mediocre at.

With all that said, even if I haven’t convinced you of a path to get behind in terms of a specific change, I hope you’ll be able to engage in a meaningful conversation in the comments as to what makes Autocannons one of the on-paper weakest weapon systems, and argue as to why they should or shouldn’t be changed.