On Thursday, a post appeared on reddit stating that for non-perfect setup skillpoint (SP) farming, that is, training characters purely for the purpose of extracting their skillpoints each month, the months of easy ISK were over, as skill injectors dropped in price to the point where it was no longer profitable to extract each month from a farmed character.

Before we dive into graph-porn (kindly provided by Lockefox over at Eve Prosper), let’s do a quick recap of how SP farming works.

So, what is all this discussion at the moment about?

Since injectors launched in January 2016, their profitability has generally ranged from 300-400m ISK per month based on using +4 implants and the correct remap.

There have been some people who have jumped headlong into SP farming, setting up 50, 60, 100, 150 and more characters for the purpose of extracting brain-goo each month.  These people have made a very nice amount of relatively passive ISK each month.

Even without a large zombie farm, 300-400M ISK per month for a passive activity has been attractive to players. Even if you do not PLEX your account, it is an easy way to get a nice injection of ISK each month. Of course, the downside is that you are not training for new ships but that is not a concern for a passive character merely being farmed for SP.

Since the April, injector prices have been steadily falling. 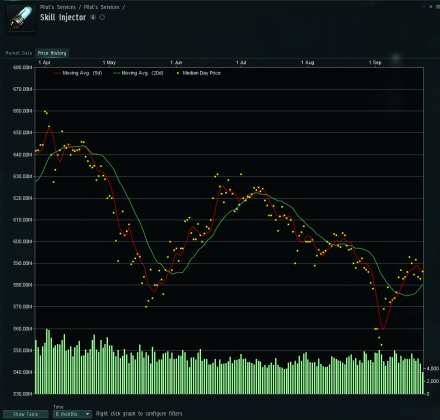 PLEX, meanwhile, has recovered from the crash in prices just after the release of citadels, and is now above the price it was at prior to the Citadels expansion. 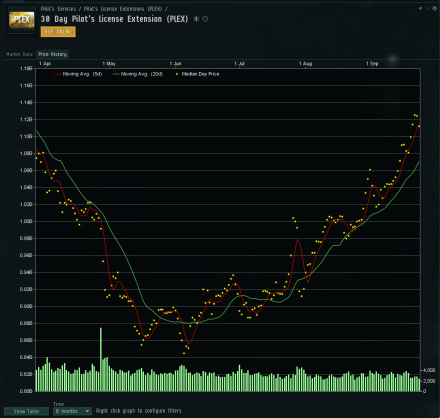 What this means in practice is that the profit each month has been decreasing, because extractor prices follow the PLEX trajectory due to the PLEX – AUR – Extractor conversion. 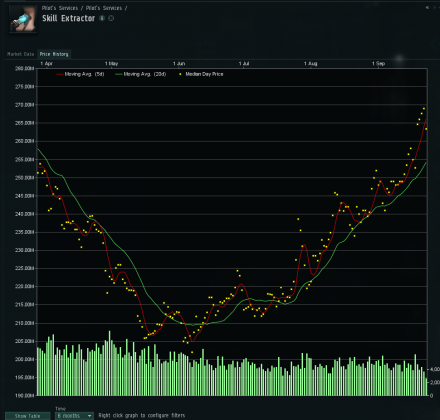 The graphs above show that as PLEX and extractor prices have risen, the injector price has been falling. This has led to “PLEX parity”, which means that when you do your monthly “Injector sell price – Extractor buy price – PLEX price” you end up with 0 ISK profit.

The very sexy graph below (courtesy of Lockefox) illustrates this: 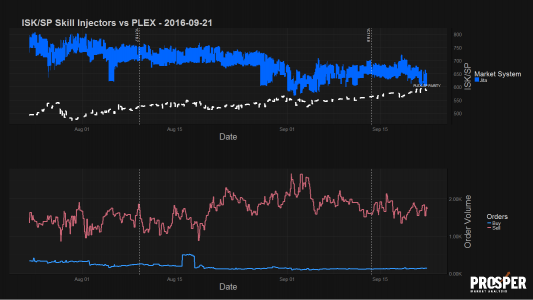 The white dotted line on the top graph is the “PLEX Parity” price. The blue line is the ISK/SP price obtained by dividing the injector price by 500k. When these two meet, it means your profit is 0.

So, what is actually going on? Is the era of SP farming at an end, or is it just overreacting?

Before you delete your SP farming alts and run around Jita 4-4 in a panic, parity is only for worst case scenario SP farming (defined as SP farming where you buy extractors and PLEX from sell orders, and sell your injectors to buy orders, with implants that are not +3s, +4s or +5s). 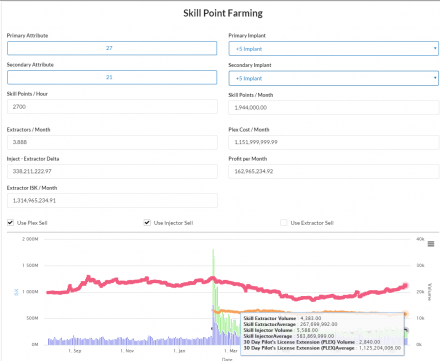 The image is taken from the tool at eve-mogul.com (link here so you can play about with different settings for yourself https://www.eve-mogul.com/ftp).

Ok, so, why has injector price declined? There has not been a significant drop in demand; the volume traded is fairly steady at around 5,500 per day average. This has remained generally constant over the past few months, which indicates that a large amount of characters are extracting.

If we assume that 50% of the volume goes to buy orders, that means 2,750 per day are traded. That equates to 82,500 traded over a 30-day period – or 21,153 characters per month extracting (assuming they have perfect implants and mapping).

If demand has not dropped but the price has, this means that supply must have increased.

The recent “Subscribe and get rewards in November” promo from CCP may have encouraged some people to reactivate alts to perhaps extract SP from them to sell on the market.

The upcoming link alt changes may also have caused some people to extract those characters.

CCP also recently did the 90-day sub + second char training offer, which people could easily have made use of to train and extract for some extra ISK.

Offshoring from the citadels has driven the buy price of injectors up. The image below shows the dominance of the Perimeter citadel in the injector market. 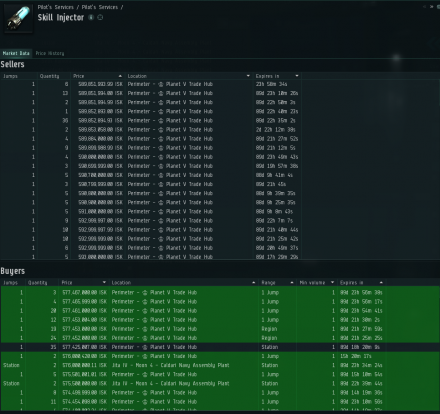 The profit on an injector bought and sold entirely through a citadel is currently sitting at 5M ISK, and was down as low as 2M ISK per injector late last night. The profit from flipping these is reliant on volume, so if an individual captures all 2,750 injectors per day, they will make 14B ISK profit on a 1.59T investment at current prices. While this is a decent amount of ISK per day, it is a small return expressed as a percent of investment – especially for the effort required in updating your orders.

The number of injectors listed at these prices are low for the most part, indicating people liquidating single characters rather than large farms en masse. It would not take much to push the injector price back up into an area that people were more comfortable with for farming purposes.

So the take-home of all of this is that SP farming is still profitable, and is likely to remain so for the foreseeable future. However, each person has their own comfort zone in terms of where they find the SP farming personally worth doing. Some may not be satisfied with the current prices and will drop out of SP farming. This would lead to a reduced supply of injectors and a subsequent price rise (and potentially more profit) for those who stuck with it.

Special thanks to Lockefox for putting up with my questions, and everyone in the SCC-Lounge for helping me with late night maths!