Two titans, an Erebus and an Avatar, were destroyed on September 23rd at approximately 22:50 EVE in V-OJEN in Vale of the Silent, capping a day of vicious fighting spanning four regions in the Imperium. The titans belonged to The Bastion (Bastion, tagged BASTN) and were destroyed by a combined fleet of Hard Knocks Citizens (Hard Knocks, tagged HKRAB) and Pandemic Legion (PL, tagged -10) and were valued at about 265 billion ISK.

Bastion had just completed an op in the system, destroying a tower that was in the process of going online, when a cyno went up. Kippig (tokkig on the Erebus) still had an Arazu in the system, and warped to the cyno to find a Rorqual. Having previously scanned down a wormhole, Kippig thought it was being moved into the wormhole and brought in his titan to doomsday it. He became concerned when the Rorqual survived the first doomsday, and a second titan was used to finish it off. Local suddenly spiked as Hard Knocks began bringing their capitals through the wormhole and engaged a cyno-jammer. 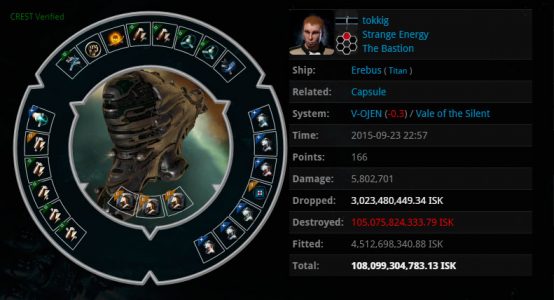 Hard Knocks was called by PL to assist in the op, but according to Stephan Schneider, PL was, in turn, hired by Searbhreathach. PL bridged to a staging system, bringing their fleet in through the wormhole to circumvent the cyno-jammer. Bastion did not realize the cyno-jammer was up and subcap support was delayed. A subcap support fleet led by Imperium FC Oxygen o4 consisting of 200 tengus was only six jumps out when the titans were destroyed. Bastion support was as close as one jump out when the order to stand down came through. An Archon was also lost in the fiasco. Both titans had seen years of action, with the Erebus having survived the famous battle of B-R5RB with only 30% armor. 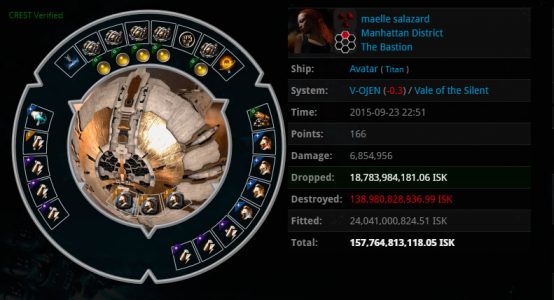 Northern CoalitionDot (NCdot) bridged towards the fight, but were not able to make it in time to assist in killing the titans. Earlier in the day, NCdot and Mordus Angels (MOA) had tackled Imperium supers in X-7OMU in Pure Blind, but were not able to close the kill. MOA instead withdrew to engage a SpaceMonkey’s Alliance (SMA) support fleet in Fade before taking a wormhole to Deklein and destroying five KarmaFleet (SNOOO) carriers worth 13B.

TheMittani.com has reached out to numerous pilots involved in this skirmish and will update this article as more information is gathered.