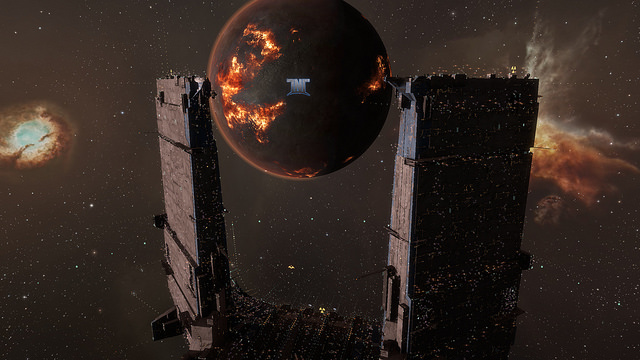 The TNT Keepstar in Delve. Image by Rose Knightley

It feels like we just made a post about Keepstars going online in Delve the other day, and that’s because we did. In the ten or so days since then, there have actually been two more Keepstar citadels anchored in Delve. It should come as no surprise of course, that Reddit is frustrated about it. Peoples Liberation Army <P.L.A> had the pleasure of bringing the 6th Keepstar online early this week. They were followed a couple of days later by Tactical Narcotics Team <TNT>, who were happy to bring the Keepstar total up to 7. We caught up with TNT Director Wibla, who mentioned that the whole thing went off without a hitch. “The fewer people who know what’s going on, the better.” Wibla went on to say, “ours was ready last week, but I didn’t want to drop it on a weekend night.”

As the number of Keepstars and other citadels continues to grow in Delve, some of the more populated systems may begin to turn into veritable citadel traffic jams. It’s a pretty good problem to have.

There has been a gif created of the Vegas Strip in Delve approaching a Keepstar, and we recommend you check it out here.

Our photographer Rose Knightley has been out to look at the Keepstar, and you can see the results of the trip here.