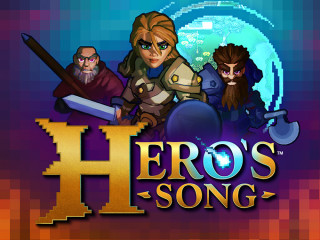 The crowdfunding effort on IndieGogo for procedurally generated indie-RPG Hero’s Song ended today with a final total of 94,331 USD raised after launching on September 7. Though amounting to less than half of the campaign’s 200,000 USD goal, the funds will still be added to developer PixelMage’s coffers because of IndieGogo’s flexible funding (unlike Kickstarter’s all-or-nothing approach).

Because IndieGogo’s flexible funding means that the money pledged will still go towards the game’s development, one could call this crowdfunding outing a partial success (especially compared to the original Kickstarter). And unlike some crowdfunded projects with deeper pockets, the game continues to steadily progress towards completion, with a third alpha due to release later this month. “While it’s short of what we were looking for, it’s helping us immensely,”said PixelMage CEO John Smedley said to backers in a final update to the campaign.

With 3007 backers pledging an average of $31.37 each, the game definitely has a small but dedicated fanbase. Their production team is also impressive, made up mostly of Sony Online Entertainment veterans. With the high profile failure of procedurally-generated No Man’s Sky, it’s possible that prospective pledgers were wary of more procedural promises that could end up delivering content that is overly homogeneous and rough around the edges—After all, it doesn’t matter how many worlds you can generate if none of them are fun. Hero’s Song will have a chance to dispel this lingering cloud over procedural generation as it enters alpha testing for backers this month, and early access for the general public in November.