Guardians of the Galaxy lost a number of carriers as well as more than fifty dreadnoughts in a battle in Deklein today, April 21, at about 1400. The battle took place on a GOTG Raitaru, as carriers and Feroxes formed to attack the Imperium’s recently acquired Fortizar in former Imperium capital VFK-IV. Imperium forces quickly responded with dreadnoughts to defend their new station, prompting a short series of escalations that resulted in over 200 billion ISK lost by GOTG in exchange for 136 billion ISK in Imperium losses.

Just prior to the battle, former SLYCE director King Voodoo defected to the Imperium, transferring ownership of the VFK citadel to GoonWaffe (it is now being cared for by the Young Miners’ Christian Association).  King Voodoo also stole billions of assets from GOTG’s largest and most active contributing alliance. In addition to material stolen, another large group of jump clones previously residing in the station were killed as the cloning bays were offlined. 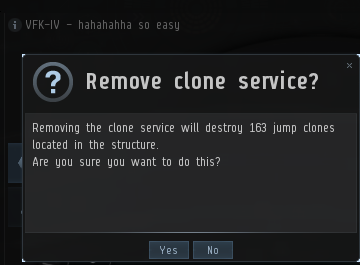 In response, GOTG began to assemble a small gang of carriers supported by Feroxes on a Raitaru in the system. As they were forming, however, they were interrupted by Imperium dreadnoughts belonging to special interest groups and squads operating in the North, according to Jay Amazingness, the Imperium capital FC. As carriers were cleared from the field, GOTG responded with their own dreadnought fleet.  Unfortunately for GOTG, the system had been cyno jammed by their own hand, and the cynos into the system were destroyed.

As GOTG’s rag-tag response force trickled into the system, numerous poorly outfitted Naglfars and Moros were destroyed.  GOTG has been struggling lately with poor economic output, and morale continues to be lost as a series of high-profile defections have been battering the coalition. Two days ago, a former Kenshin director left the coalition, taking with him an unanchored Keepstar and two Fortizars. The fits on the dreadnoughts seem to indicate an inexperienced and poorly cared for front-line fighting force, a tragic although perhaps inevitable result.

Imperium capital fleet FC Jay Amazingness and sub-capital FC Kendarr ultimately were able to hold the field on the enemy Raitaru and also managed to save the objective, preventing the GOTG fleet from being able to reinforce the newest Imperium structure in VFK.  Asked to make a statement, Jay Amazingness reflected his focus on the greater objective, adding only “If anyone wants to defect hit up HyperViper1 on discord @hyprviper1#3885.”

Today’s loss represents another in a series of humiliating morale and material losses for GOTG, but far more importantly, it answers a question that has been on the minds of all Imperium citizens for years: VFK by April.