According to an announcement at 1805 on April 19 by Asher Elias, a major theft from the Guardians of the Galaxy coalition has been carried out by Imperium operatives. Assets stolen include 1 Keepstar and all Deklein Fortizars owned by Kenshin. This indicates infiltration or turning of directors at the highest levels of the coalition.

In addition to the theft of citadels, all supercapital and titan build cycles in progress were cancelled and assets from corporate hangars stolen.

The exact ISK value is unknown. However, it can be assumed that it is monumental.  An image of the heist in progress was posted onto Reddit.

This represents a significant victory for the Imperium and its undercover operatives in particular. Moreover, it is another severe blow to GOTG, which already has suffered from a sustained campaign at the hands of small groups of Imperium SIGs and squads acting independently in the region.

More on this story as it develops.

UPDATE: INN has received the following details from a senior member of the Imperium’s intelligence community:

“We had a darkness guy come over and bait on his hel for us, we didnt manage to get a super escalation out of gotg, but we killed a lot, regardless. One of his friends was a full director in Kenshin, who are pretty much the pvp backbone of Darkness. He approached us via the guy who had already joined, and we came to agreeable terms.

“As of right now, Kenshin has lost a corp Keepstar and Fortizars, they’ve had their corp hangars emptied and wallet drained and other random disruptive things done. We didn’t think we’d be able to get the Keepstar because it was on the ceo’s alt. Luckily, someone accidentally put the Keepstar in the corp delivery hangar instead of the CEO’s.”

Sort Dragon, the leader of Darkness, has had some things to say recently about the reddit posts regarding the fighting in DO6H and the defecting Hel pilot:

It is unknown how Sort will respond to this latest development, however, as he is still traveling home from Fanfest via Japan.

18:40 EVE: The original text of this article indicated the material was stolen from Darkness Holdings. This has been corrected as more information has become available.

18:53 EVE: It would appear based on images from Imperium operatives that clone services are also being removed in various structures, resulting in the destruction of over one hundred jump clones in the area. 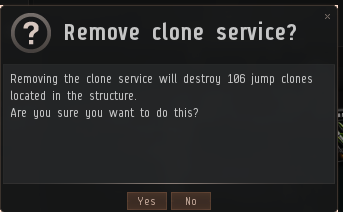