Game Mechanics, And The Often Unheard Of Voices Of Smaller Entities

There has been a lot of uproar and complaining over the last month. Much of it has been people from major bloc entities arguing over CCP’s proposed fighter and fighter bomber changes. In the process, a lot of players have lost sight of how the changes will affect smaller entities within the game, especially the few independent entities that still exist in nullsec.

Often, these alliances have little to no form of alliance level income. In the Scalding Pass and Wicked Creek regions, Vanguard and their associates hold the majority of high-value money moons. In Cloud Ring, Pandemic Horde holds the claim to the R64’s. And in Fountain, the same is true of The Culture. The small alliances, without wealth generating moons, have very few ways to secure income. As a result, they’re left taxing their members’ ratting profits.

The lack of major income also affects the wallet of line members. Without that major income, the ship replacement program funds prevalent in larger alliances may not exist. This means that line members’ losses come out of their own wallet. To many, this may not be seen as a large issue. However, larger alliances do not have to worry about this issue. As a result, a nerf to income at any level can heavily affect small alliances within the game.

A look at the figures for income in Delve, and most other regions supports this. The regions with large amounts of income from bounties are generally in regions owned by large coalitions or alliances. In the monthly economic report from May, the following graph shows the production in delve, and shows how little is being exported from the region: 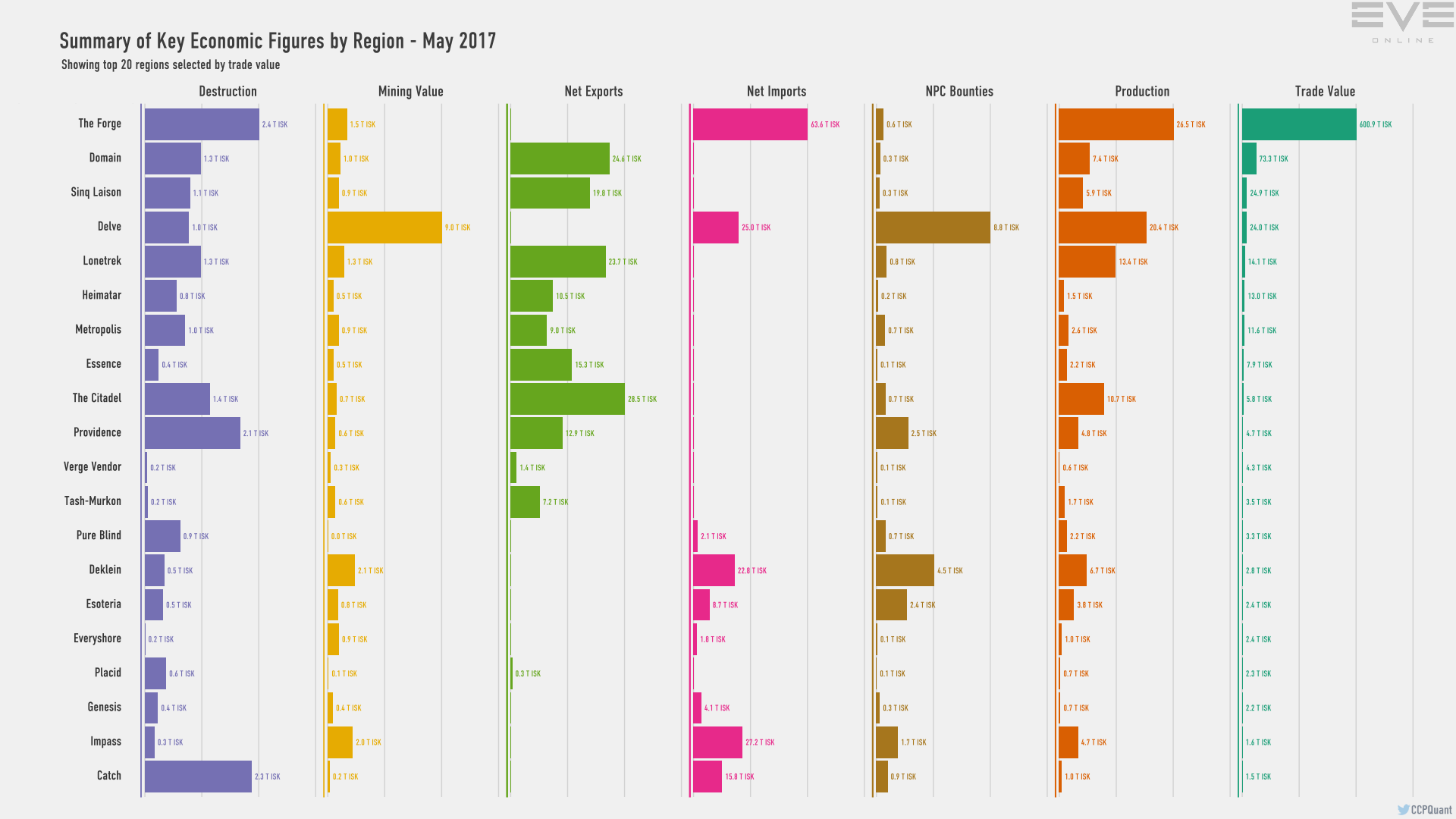 One example of a proposed fix that gained traction was posted by Mr_Twinkie- on Reddit:

“So random thought popped into my head today. Why do sov levels work backward to what makes sense, specifically when it comes to mining and ratting?

In theory, if you’re destroying 2,000 ships of a certain race an hour in one system, why would that race think it’s a good idea to put even more ships or bases in that system? Why wouldn’t they use the system two jumps away with four kills per hour?

Sov levels get flipped. A level 1 industry system has the best ore anoms and the most asteroids. Level 2 there are fewer anoms and less asteroids (because they’re being depleted). Level 3 etc… until it’s a barren waste (until the level drops and more asteroids float into the area or some rp thing).

Ratting is the same. Level 1 the system is infested with the crab scum. Level 2 they’re slowly being beaten back and there’s fewer sites, etc etc…”

In theory, this idea works perfectly. At least, it works when aimed at the large alliances who control a region, or multiple regions. In the era of Aegis sovereignty, though, smaller alliances may only control one constellation. When aimed at these groups, this idea is harmful. A better suggestion would be to have the anomalies, and their spawn rates change based on the average number of people in the system over the last 24 hours.

The proposed system also makes it more valuable for large entities to dominate smaller entities, evict them from their space, and keep empty constellations, and optimize the use of these empty constellations by using a “space-rotation” kind of system, rotating out systems when they become overused.

But these ideas are only representative of the major entities in New Eden, and therefore represent what is in their best interests. By examining different aspects of game play, we can see how CCP has tried to make it so that small alliances are able to thrive in the current era of EVE:

Recently the following image was posted on Reddit, showing the change in sovereignty control since between 2014 and 2017, as can be seen, large entities still control swathes of space, however, there are more smaller entities holding space in the current climate.

Since the introduction of citadels and industrial complexes, however, it has become much harder to claim sovereignty. The attacker also has to remove all structures from the space in order to maintain control over their space. And so, there have been calls for a reintroduction of the same style of sovereignty mechanics that were present in the Dominion era.

This is understandable, as it can be frustrating entosisising nodes for hours on end. But any mechanic that favors static fighting over one objective ultimately only benefits the larger alliances. They can control a single grid with capital and super-capital domination more easily than many grids in the same constellation. Aegis sovereignty is working, even if citadels have negated many of its advantages. As a result, this mechanic is still more favorable for small- to medium-sized alliances.

Small and Micro-Gang roams are based around certain fleet comps. These are generally kite-y, fast ships, and faction battleships are a popular choice. Unfortunately, due to the over-saturation of faction battleships on the market, and in the game, times have changed. Faction battleships have gone from being a small gang staple to the centerpiece for fleet compositions for larger entities. When an alliance can field 80+ Machariels or Rattlesnakes, it is obvious that there is an inherent flaw in the system.

Unfortunately, it’s something CCP can’t account for. The lack of large-scale warfare is the ultimate problem in New Eden. Making these ships rarer is the only way for CCP to attempt to control this over-saturation in the current climate. Prices would rise. However, this would have a negative effect on smaller gangs and alliances. It’s not even clear how effective such a measure would be. Many groups in null have been stockpiling blueprints for years. It may be too late to limit the availability of pirate battleships.

Another concern comes from the mechanics of electing a CSM (Council of Stellar Management) representative. Members are elected by majority, the major power blocs are able to ensure their representatives claim a seat on the CSM. While this is unfortunate for smaller groups, it is also fair. The majority of players see their interests being represented on the CSM, and their voices have more of an impact. As a suggestion to balance this, a seat or two could be reserved for representatives of small entities. This, of course, could open those seats up to be gamed by alt alliances of  large entities. As a result, it would need certain protections to work.

Realistically though, assaulting a player’s incomes does not solve CCP’s issues. Nor does changing faction battleships prices. The problem is a lack of content in New Eden. (Ironically, this is a problem small and medium sized alliances do not have.) People throughout New Eden make money with nothing to spend it on. EVE Online needs a war, and the players need a reason to go to war. The question CCP should ask themselves is not “How do we stop players making so much ISK?” Instead, they should ask, “How do we encourage players to destroy each others’ ships?”