In a new devblog posted on Jun 20, CCP Falcon has unveiled the future of EVE Online’s forum software. Based on the widespread Discourse platform, the new EVE Online forums will replace the current iteration that has been in use since 2011. In addition, an update to the forum policies was released outlining the new, streamlined policies that will be in place on the new forums.

Out With The Old…

The 2011-vintage forums were heavily customized to interface with the Tranquility server. This allowed features like being able to read and send in-game mail through the forum interface. Unfortunately, this also meant that TQ server outages could also knock out the forums. Losing the forums whenever TQ dropped made it difficult for CCP to use them telling people ‘TQ is down’. These new forums don’t look to have the same level of integration—there is no EVE-mail option, for example.

This is supported by Falcon’s statement that the new forums will be “a solid medium through which to communicate in the event of any significant issues with Tranquilty.[sic]” As a result, CCP will be able to use the new forums as a significant system for maintaining contact with their EVE customers. Posting on the new EVE forums, CCP Falcon expanded slightly on what this means for /r/eve readers. “Going forward, all our official communication will be here, and if people want to link Reddit to here, they can.” He added that CCP staff will “still be browsing and posting there most likely though.”

…In With The New

CCP is also streamlining their forum policies. The number of rules for forum use is dropping from almost 40 down to 9. Among the newly-tolerated behaviors are posting images, videos, and links to killmails, so long as they’re not used for harassment or trolling. Some of this new flexibility is a result of the improved software performance. Much of it, though, represents a more moderate approach to community management.

Additionally, CCP is resetting all forum bans, and putting a full amnesty in place. Going forward, the ‘normal’ penalties for policy violations will cap out at a 6-month forum ban. CCP does reserve the right to enforce harsher measures in the case of particularly egregious violators, though.

The forum rollout is happening quickly. Where in the past CCP may have dragged their heels on some aspects of community management, this time that is not the case. The new forums went live simultaneously with the devblog’s release. Additionally, all CCP official communication will move to them by the end of the week. There will be an overlap time of 1 month while both forum systems are active. As of July 20, though, that overlap will end. The new forums will move to forums.eveonline.com, and CCP will archive the current iteration on oldforums.eveonline.com.

Check out the new devblog for more information!

And don’t worry, CCP Falcon isn’t actually claiming to be an alt of CCP Chair and CCP Kitteh. That’d just be ridiculous. We’ve all seen Chair and Falcon in the same place at the same time. Falcon and Kitteh, though… 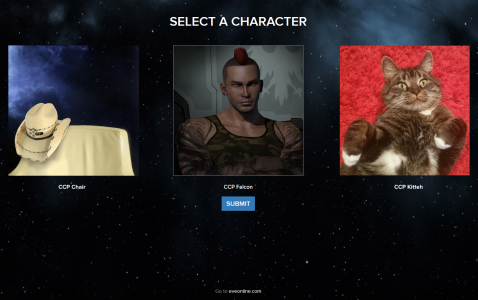