NO, IT ISN’T FREELANCER

EVERSPACE is a roguelike space shooter currently available on Steam through the Early Access program. This arcade-style single-player action game takes players on a journey through space towards an unknown destination, accompanied only by an onboard AI system.

The objective is simple enough in concept: jump through various sectors of space to reach your destination. The achievement of this goal, however, is significantly more challenging, pushing boundaries of difficulty that only games like Dark Souls dare to. The player will have to not only defeat or evade countless hostile ships but also maintain their supplies and avoid the equally hostile environments of space itself.

You see, death is inevitable in EVERSPACE. You are not a hero embarking on an epic journey, but just another run of the mill space pilot looking to stay alive. With death comes a new pilot with a new name, who must attempt to do better than his predecessor before meeting the sweet embrace of his own death. Whether it is dying at the hands of a hostile ship or running out of fuel in the middle of cold and dark space – death comes swiftly, and frequently. 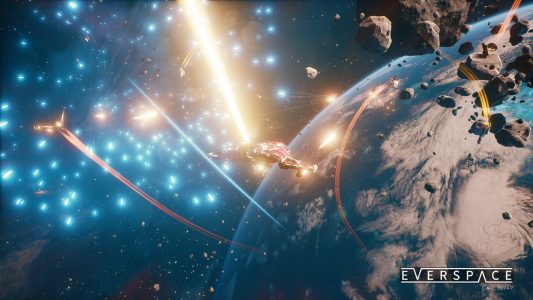 CREDITS ARE JUST ANOTHER NUMBER

Death isn’t the end of the road, it’s just a small bend in the road of a much larger journey. EVERSPACE offers persistent progression for players, taking away a portion of the sting of death by allowing players to spend the spoils of their journey on improving their next adventure. After each death, players can use credits and blueprints to improve one of three available ships.

With a perk tree to unlock skills in exchange for credits and ship loadouts that can be customized, each run the player starts off with a ship that is a little better than it was last time. It is this method of progression that keeps the player going, attempting run after run with the hopes of getting a little farther and a little richer with every attempt.

There are many ways to acquire spoils on each run, and the developers have crafted a rich universe that changes slightly with each trip. While the game is under development, the developers have already begun to craft the foundations of a story for the player. While traveling through each sector, the player will encounter a friendly organization that is trying to forge a new home that was taken from the hands of an alien race. A race that is none too pleased about its new neighbors.

This alien race and an assortment of other enemies will attempt to halt your journey in its tracks. The game’s six-degrees-of-freedom flight system means that the player will have no shortage of fast-paced dogfights when engaging with these enemies. Winning the battle means the chance for loot and plunder, often in the form of credits or various resources. 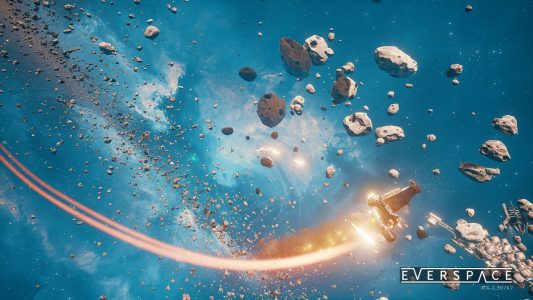 BUILDING A BETTER YOU

Gathering resources play a large role in EVERSPACE, on each run the player will need to not only gather fuel but resources for crafting. The game features a crafting system which allows the player to create ammo, such as missiles, and consumables that assist the player. These consumables range from scanning probes to highlights points of interest in the system to defense systems and combat drones.

Weapon systems can also be found and swapped out on the spot or upgraded to more powerful versions with the right resources. Taking time to improve your ship during the run will increase chances of surviving for longer. There are tactical decisions to be made in what types of weapons are used and in what combination, some are better at damaging the hull, some excel at dropping shields, while others are fine-tuned to do a little bit to both.

It’s this versatility in play style and the fast paced combat that makes EVERSPACE an entertaining and addictive experience. The player is constantly thrown challenges, and not always in the form of difficult waves of enemies. There are times when the player is almost out of fuel, no hostiles are nearby and the only chance of getting fuel is to attack that friendly mining operation in the area. There is always a sense of risk and desperation as each run progresses. 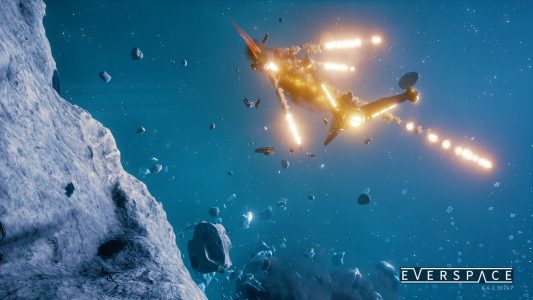 BEHOLD A THING OF BEAUTY

The game is built on the Unreal Engine 4 and the developers are putting in a great deal of effort to fully utilize the engine in making a beautiful game. From the backdrop of the universe around you to the dizzying light show of battles, the game looks remarkably good. There’s something about the Unreal Engine that allows developers to truly make their game shine.

To further showcase this beauty, the developers took the time to include a screenshot tool that allows you to pause mid-action and take a screenshot. The camera can be moved around to grab that perfect angle, examples of this are in the screenshots in this preview – which were all taken in-game using this tool. It’s a small addition, but great for showing off to your friends.

Another area of the game that was surprisingly fitting was the current voice acting and dialogue. The interaction between your pilot and the ship’s AI systems is well written and does a great job of explaining the lore of the universe as you encounter different factions and locations. While a great deal of dialogue is still missing and some of it is currently only provided with subtitles, it’s a great start. 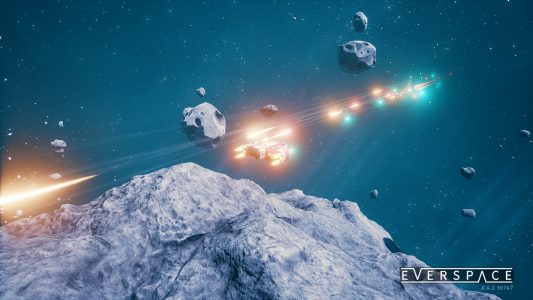 THE ROAD TO HELL IS PAVED WITH GOOD INTENTIONS

Being an Early Access game, many gamers can be skeptical as being burned by adopting a game early is more common than it should be. EVERSPACE, however, is already well polished, filled with enough content to offer an engaging experience, and is far enough along in development that the risky hurdles have already been overcome.

The game is set to be released in Q2 of this year, with the developers providing a roadmap that only consists of a few more core features. These features include dynamic cockpits, a finished non-linear storyline, hardcore mode with permadeath, and VR support. While I am sure there are still bugs, in my play sessions I never encountered any – and even if I did, I certainly didn’t notice them while playing.

EVERSPACE is shaping up to be one of the best roguelike games to be released in recent years, I look forward to seeing where it goes from here. If you’re looking for a space shooter to scratch that dog fighting itch, I couldn’t recommend EVERSPACE enough. The concept and execution are on point and this is definitely a game worth getting behind. You can purchase EVERSPACE now on Steam.