One of the most interesting and anticipated presentations of Fanfest 2017 was the Structure Update by CCP Fozzie and CCP Nagual. The presentation was packed with information but still left us hanging on a few key points. To be honest it would be irresponsible of CCP to release certain information now. While one can question the direction of some of the changes and the positive vs. negative impact to the game you cannot deny CCP is investing heavily in them.

If you did not catch the stream live you can watch it on CCPs Twitch Channel. Below is a summary of the key points in the presentation.

Upwell Structures—The stock must be soaring with this many deployed

The new Upwell Structures have been popular. As of the end of March 2017, players and corporations deployed a total of 16,818 new structures in New Eden. The following charts are from the Structure presentation and show some interesting stats and trends regarding structures.

The Astrahus and Riataru lead in popularity. 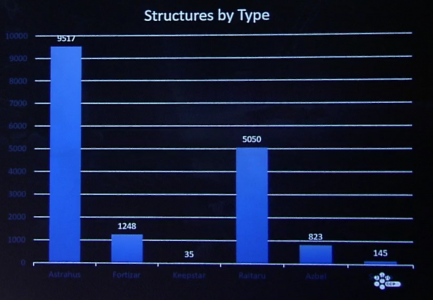 During the presentation of the following chart, there was a comment made at least twice by each presenter related to the defensive strength of structures. It seemed to indicate that CCP expected more citadels to have been destroyed. Is there a nerf in our future? Some of that speculation seemed to be tempered by comments around there being a lot of data to sift through, that structures are still very new and the introduction of refineries may alter that perception. When comments like that are made so flippantly it fuels speculation around the target. 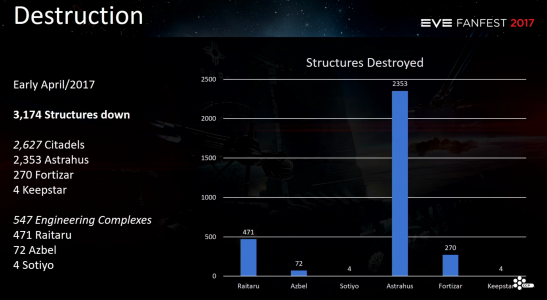 Distribution of Structures by Location

By its very nature, Null Sec is the perfect place for the new structures. High Sec has also grabbed on to their use and we have seen many markets and engineering complexes added there for public use. W-Space has found them an effective solution for the many issues Starbases presented there. W-Space has an average of 1.2 structures per system. The comment was made these are clustered in certain systems but the popularity cannot be denied. 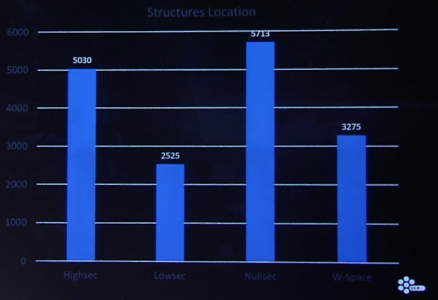 Two corporations own over 100 structures. CCP Fozzie teased at releasing it but then decided not too. They indicated they were very happy with the distribution of structures among corporations. 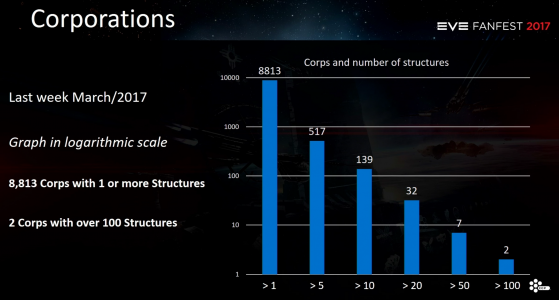 CCP indicated they were very pleased with the rate players transitioned to the new structures. CCP needs to be very careful here. Hopefully, they did not use the big carrot to help players adopt the new structures only to severely nerf them later. 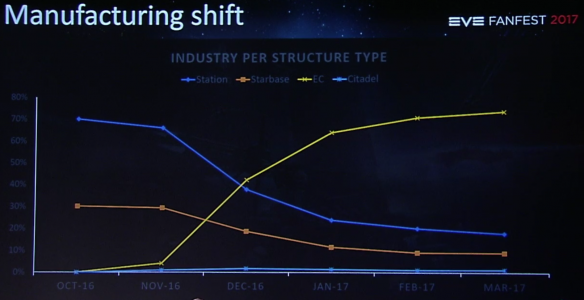 Players quickly transitioned to the new structures in a few months. Both station and POS manufacturing shifted to the new EC’s quickly. This is really is not surprising. EC’s offered significant advantages both in terms of bonuses and security. Those two items are key in adoption of new things in EVE.

Some fixes were mentioned as arriving as soon as the May patch with others taking longer to deal with. A number of these fixes are back-end fixes for performance and polishing the UI interface. One nice feature due in May is a Station Bio. This will allow owners to add important information about the structure and policies. It’s free form so really anything can be there. While useful I am sure we are going to see some interesting and funny bios around. Alliance and Corp logos will be added to structures along with an image of the owning corp’s CEO. While little more than gingerbread this type of personalization is one of the more unique and interesting aspects of EVE. Everyone likes their dominance to be reflected and it is a cool feature to add.

One important fix in W-Space is the issue where loot is ejected in station containers. This denies the attacker loot. CCP has promised to fix this issue.

Refineries are now officially scheduled for the Winter Expansion. This will be one of the most revolutionary changes the game has seen since Fozzie SOV. I would argue it will have a greater impact than any change in recent memory.

Refineries will come in two sizes: Medium and Large. The price point is targeted to be cheaper than the respective citadels but more expensive than Engineering Complexes. 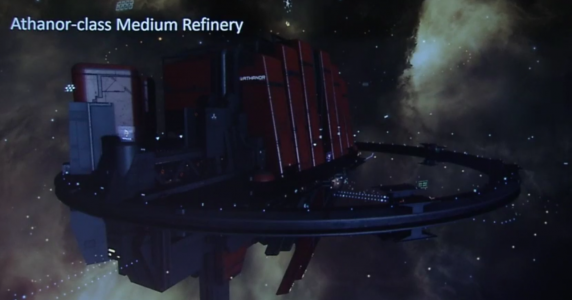 The new refineries will become the best structures for refining. They will be the only place you can run T2 moon reactions using the industry interface rather than the cryptic and much-maligned reaction interface in use today. Reactions will require service modules. There will be modules for T2 reactions, Hybrid reactions, and booster reactions.

While the conversation did not get quite as in depth on the mechanics of moon mining when CCP Fozzie joined the Talking in Stations crew on INN’s Twitch Channel a few weeks ago; CCP did close the loop on a few outstanding questions. One, in particular, was in relation to how many refineries can be anchored around a moon and how the one that controls the mining is determined. It appeared that the L1/L2 Lagrange point would still be used as the primary control point for a moon. Only one refinery would be allowed to be anchored at this point to control the moon.

While the slide used said there was a “new active process” for moon mining it’s really just a rehash of belt mining today with a slight twist. CCP needs to be careful here. Reusing too many mechanics and processes in-game tends toward limiting gameplay options rather than enhancing different play styles. No matter how they wrap this as a “new feature” it’s not. While it changes the dynamic of some of the play styles the new mechanic is a limiting gameplay factor to a degree we have not seen before in EVE.

That said the change does offer some potential future options that could be more interesting than the moon mining change. CCP Fozzie mentioned they had some ideas related to using this mechanic in HS and W-Space but not for T2 moon mining in those areas. This is pure speculation but could this be the disappearance of the ever present and respawning PI, ice and asteroid belts? Imagine the code and the overhead that could be replaced.

During the questions and answers, part of the presentation CCP indicated that the belts created “may” include other ores. They will contain new ores that will be turned into moon goo presumably via refining. CCP is considering a redistribution of moon goo. A decision on that is not final. Refineries will also have rigs for reaction bonuses. There is expected to be some leeway between when the pull of the chunk of the moon is completed and when the refinery owner explodes it into a belt. This is expected to be hours vs. days.

Rebalancing of the ore could be a very interesting aspect of this. If CCP were to go down the path that a moon is either able to be mined or not we could have the rebalance we need and bring to fruition the goal of a more independent Null Sec. Make the quality of moon goo dependent on it being in Low Sec or Null Sec. Have the resulting belts contain various types of ore depending on true sec. This could be a very interesting change. No more goo specific moons. Make the belts contain everything to varying degrees.

There has been much talk over the moon mining ledger. Is it too much information? Should it even exist? Will it just cause drama and a headache for those who use it to manage the process? The idea is the ledger will drive player interaction through cooperation and competition. Unless there is a tie to taxes collected automatically this looks to be a fiasco. At the same time collecting taxes as a mechanic like ratting taxes could present a different set of technical problems. This is not an easy issue to solve and we will be left to see how players use the information and how effective it is.

A few potential expansions of the ledger were discussed. These included a personal ledger for players and system-wide ledgers for SOV holders. No promises were made on these items.

The May update will bring some changes related to POS structures. Seeding of BPOs for Labs, Compression, Reprocessing and Assembly Arrays will end.

In August the bonuses these arrays receive will be removed from the game.

At a later date, they indicated POS items would be reimbursed.

The DO IT Program: Outpost Transition

Upon release, outposts are destined to be replaced by 5 new faction citadels. These are limited edition and will never be produced again. They will be replaced by Fortizar class citadels. Any upgrades that were applied to these stations will be converted into a single rig. Unanchoring a structure will destroy this rig. The rigs are unique and not able to be replicated. There will be an invulnerability window of seven days post conversion to allow owners to decide what to do with the new structure.

Faction citadels will be able to be unanchored and moved, sold, etc.

Each faction citadel will have some additional unique bonuses. It is important to note that these are expected to be very good and all around bonuses but not exceed those of engineering complexes. 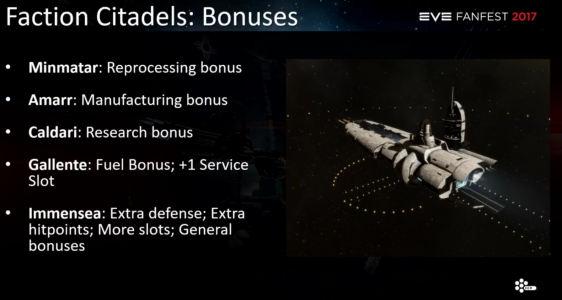 The new faction citadels will not leverage the entosis “sov-wanding” mechanic. They will use the current structure kill mechanics. There was a remark in response to the question on using entosis against the faction citadels about a future state using the best parts of entosis and the Upwell system mechanics. Time will tell if that is a good thing or another horribly designed system.

There are 68 unique conquerable stations in New Eden. On transition, these will get an additional monument added in space. The monuments will contain the transition owner’s name forever. CCP is taking some feedback on what additional text to include on the monuments.

A transition date is not finalized but it is expected to happen after the Winter Expansion and after the release of refineries.

This presentation contained some of the most impactful changes to the game to date. The addition of Refineries and the associated mechanics has the potential to rock the internal market and send it into disarray. We are already seeing that in the last few weeks. If not handled well this could be a disaster. CCP could have gone a number of ways with refineries. This direction clearly makes smaller groups of players now unable to manage moon mining or even get a small piece of the action. Short of teaming up with a coalition or larger organization or ninja stealing abandoned belts or just doing reactions there is not much left for them. At the same time, it opens up a number of player options. It all depends on how the players react.

The conversion of existing outposts to faction fortizars is a long promised step toward everything being destructible. Now if I can only convince them to get rid of Low Sec and reduce High Sec to one constellation each.

While many of the presentations at this year’s Fanfest have lacked the zing that keeps it fun and interesting this presentation at least packed a ton of information in a short timeframe. I encourage everyone to watch it if you have not. You will need to scroll forward in the Day 2 presentation but it is worth it.