Spoilers about really cool stuff in the game that got me excited to play and talk about Eve Online below. You have been warned.

The latest update for Eve Online has been delivered, bringing a new Triglavian site for players to take part in as the invasion of New Eden continues. The site features new Triglavian NPC ships, as well as a Triglavian Stellar Accelerator, which is designed to alter the solar effects across the system.

The site pits you against a new flavor of Triglavian battleships, more on the elite side, so expect more e-war and harder-hitting damage. I don’t know what they do as, to be honest, I did what every good reporter does when new stuff comes out: go check it out in my pod and watch. And watch I did.

I feel this is where the spoilers really start, the stuff that made me go like this.

Ok, so like the professional I am, I did not record or take pictures of the site because…well I expected there to be more than one of these. Guess I was wrong. From my understanding of these sites, what happens for now is if you fail them, you are locked out from the site and have to live with the effects until downtime the next day, or run other sites. Since I was in a non-farmed invasion, neither of these were an option for me.

So I warped to the beacon in my corvette and was duly killed by the roaming gang. No worries; the gate accepts my pod, and in I go. You will want to make sure you are on max graphics. Pump that stuff up, add full effects, and hell, maybe even sound. I land on-grid with the Triglavian ships. One group is a small frig with a mix of destroyers and maybe a cruiser. The other group are the new battleships. I’ve looked around and tried to find the cool new structure, but they were nowhere to be found. I was thinking, wow is this a bug, have I missed something?

But then the battleship starts to deploy and build the structure in front of my eyes,. It’s exciting and looks amazing. After the first wave of building, the wire frame has been installed and then they start what looks like another wave of building to power up the structure. After this the beams stopped and I saw a pop up message that said that Loyalty Points failed, as I was not due a payout in a pod. The site ended. And with that, no more new sites spawned. There were no more chances to warp back to the structure, making me think that it was a win for the Triglavians who now had their system-wide effects in place. 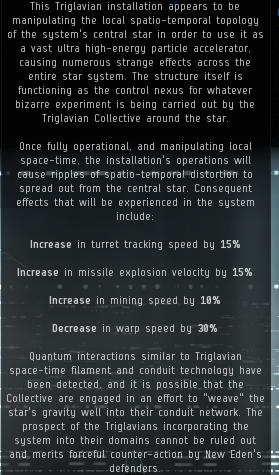 Working in close relation with the team at ARC, who have been looking into the sites, it’s understood that after a period of time the gate opens back up again, giving players another shot at stopping the Triglavians from placing the structure. This might be due to a timer or other players running other sites. However if it goes up, it does shake up the system. For example, the two mining bonuses cut mining cycle time in half before bonus, giving a major boost to mining.

Well done to CCP. While we don’t yet fully understand what we saw, I’m loving all of it. The idea that the site can be locked out, maybe if they failed to online they will try again, will be something to look into this weekend.