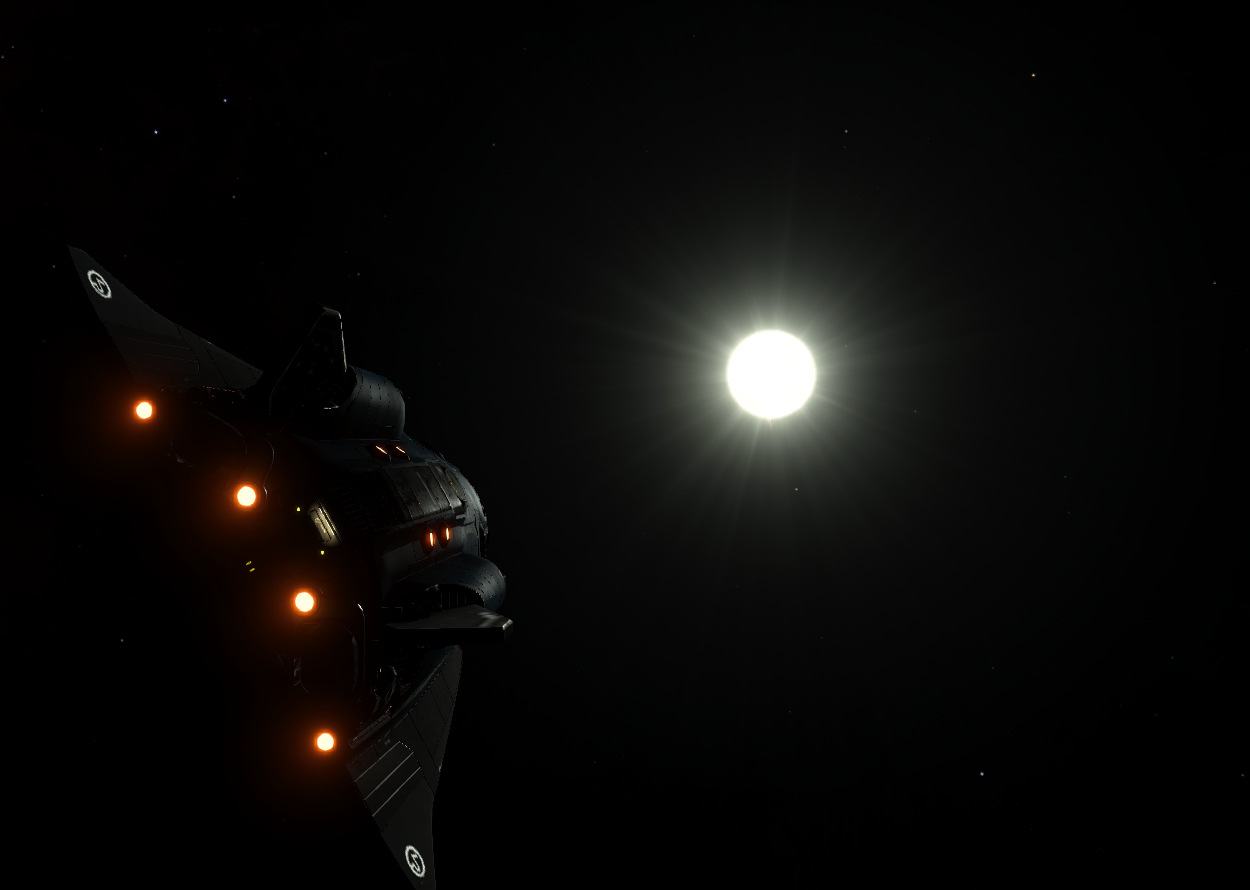 Previous entries of the Tales from the Black series

Part I of Tales from the Black

Part II Tales from the Black

Part III Tales from the Black

Part IV Tales from the Black

I was quickly interrupted in my moment of repose by a very insistent and desperate functionary. Mr. Harrell had already sent porters over to manage the loading of my vessel. Which made me begin to seriously worry for the health and well being of the recipients. If Aron was so very anxious to see me on my way with food then things must be very dire indeed.

So I sent Aron a quick note as soon as the food and processors were loaded, and messaged the control tower for permission to take off. Once granted, I was off of my pad and on my way. I had been infected by Aron’s sense of urgency and barely took any time at all to appreciate the difference between my new craft and the old.

“Plenty of time for that later,” I said, “for now this food is needed and people are hungry.”

Once I was out of the station’s control zone, I made my first jump. I took two more before I arrived into the Bernard’s star system. A relatively short transit all things considered and given the intensity that Mr. Harrell was putting out. However, no sooner than my frame shift drive had spooled down my communications console began flashing to alert me that I had not one but two vital messages.

The messages were from the regional command post and from Aron. Both of them offered to substantially boost my credit reward if I was willing to forego any other directives and deliver my goods within the next two hours. A serious windfall for me, considering I had taken on no other tasks or cargo. The bonus would more than triple the value of the original contract so who could ever say no to such an opportunity.

So I answered both messages in the affirmative and pointed my ship towards the Levi-Strauss station.

Levi-Strauss was a truly big station. Its central spike and the spinning ring were capable, under more normal conditions to support millions of human lives. The enormous spinning rings that girded the central spoke of the station housed farms and offices, homes and schools. All seemed normal and tranquil to my untrained eye.

Once I landed at the station and off-loading was started, I took the opportunity to look into just what had happened. It turned out that the station had experienced some kind of malignant parasite infestation that had rendered the crops that the station relied on to be blighted. Not just any old crop failure – this was one that threatened turned those crops downright toxic to the station at large. Once the parasite had corrupted the crops, the decomposition made the stations water PH change to threaten the algae populations that filtered and purified the station’s water and produced the bulk of the station’s oxygen.

That at least explained why the processors were needed just as much as the bulk foodstuffs.

While the news didn’t quite say so, the infestation seemed too efficient to have been happenstance. I am hardly an expert in the field of quarantining a nasty parasite, but there must be some methods in place to do so. If nothing else I would have thought that the sections of the rings and the primary spoke could be isolated from each other to preserve the integrity of the other. Then again, maybe it happened too fast, or there was some other engineering reasons for the breakdown.

Answers to that are well above my pay grade.

This started three days of high-intensity hauling on my part. a dozen tons at a time I flew back and forth from Mr. Harrell to the Levi-Strauss station. At first the processors were as plentiful as the food. Dozens and dozens of units of water purifiers, CO2 scrubbers, and filters for every contaminant imaginable. After less than a day however, the machines gave way to just food. A couple hundred tons all told. At first I was doing the job for the credits, but after a surprisingly short time I was doing the trips because the station needed the help.

Half way through the endeavor, Aron let me know two important facts. First, that the federal authorities had deemed the situation under control and there would be no further missions to deliver to Levi, and second that the station was far from out of the woods.

“Off the record, they are still in some danger.” Aron explained, “They might not starve today or tomorrow, but they still have no crops and no real food reserves.”

Aron then proceeded to point out two other stations in the relative neighborhood who were marketed as agricultural and kindly suggested that free trading the food myself could still help. So I spent two more days doing hops from system to system bringing bulk food to a station that I had started to think of as my own somehow. I know that there were many other commanders who were moving goods, and in considerably larger chunks than I was, but all the same I was contributing to the survival of real human lives. To me, and today, that meant something.