Easter weekend 2017 was barely an hour old when a dread brawl kicked off in V-KDY2 in Scalding Pass, with Rote Kapelle, Hashashin Cartel and NullSechnaya Sholupen taking on The Bastard Cartel (TBC).

According to Nathenial from TBC, they were holding an alliance meeting and were shooting POCOs while in the meeting.  A bomber decloaked in the system, and two carriers and an Apostle appeared. One of the TBC pilots had a Tornado and took out the bomber, removing the cyno, while pings went out for reinforcements.  One of the Archons moved out of the fight to refit a cyno, and this lit up as the TBC reinforcement fleet of dreads and Typhoons arrived.  Rote Kappelle and friends then brought in their cap fleet, and the brawl kicked off in earnest.  One member of TBC was multi-boxing 3 dreads that were bling fit, so Rote Kappelle headed straight for those, taking them out.  Nathenial dropped in his Thanatos, as the insurance was about to run out on it. 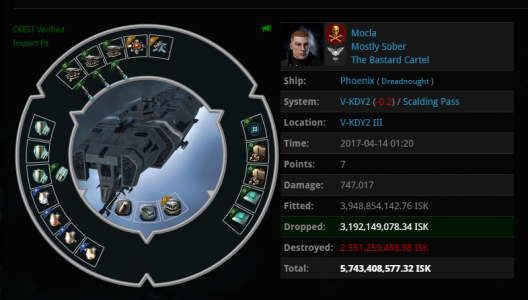 TBC had the opportunity to withdraw from the fight when the cap fleet dropped in, as nothing was tackled at that point, but, sometimes the fight is more important than the outcome, and both sides had great fun in the ensuing brawl, which only ended when PL came into local, causing TBC to withdraw and reship to subcaps.

Ben Booley from Rote Kappelle told us that they initially dropped the carriers and Apostle into the system to bait TBC into a fight after seeing them shooting POCOs mostly AFK in Oracles. They figured (correctly) that TBC would escalate to kill the carriers.  As TBC escalated, Rote Kappelle used the bat phone to call in friends and then extracted almost everything without any significant subcap support.  They, like TBC, had a fun fight, but unlike TBC they came out ISK positive.

The final toll was 12 dread losses from TBC, and 6 dreads from the attackers, along with several carriers and FAX on each side.  Losses from TBC totalled just over 54 billion ISK, with Rote and friends losing 26 billion ISK.

With Easter weekend only just beginning, and rumours of large operations from several nullsec alliances, it is looking like a good start to a very busy weekend!