MER, MER on the wall…

That’s right I don’t call it the M E R. I am stuck in MER as in mirror. Am I right or wrong…I simply don’t care.  The bottom line is that it continues to say GOONS WIN! It is clear that GSF  adapted early to the new META. Leaving Deklein and the North may have been the best thing for the Imperium. The timing was near perfect for the changes going on in EVE at the time. Delve is developing into a market hub, ratting and industrial complex. As a player there is nowhere better to go than Delve if you want to learn how to play EVE.

What they are doing with all that effort even I do not have a clue. I feel like revamping that old phrase from the expansion days in the USA.  Instead of telling the up and coming young ones to head West we say, “Go to Delve young man.”

If the EVE version of the Conestoga wagon isn’t happening yet and a trail across New Eden to Delve isn’t worn bare by now it should be.

Delve is the easy target for any MER article. One of the real issues with the MER is that since the release of moon mining CCP now blends the moon mining yield with normal mining. This needs to change. CCP should have had enough foresight to realize this and make the appropriate arrangements in advance.

The other thing CCP still needs to do is report in m3 rather than ISK. ISK reporting is only relevant for the day it was reported on. Changing values over time make comparisons impossible for trending.

This month we focus on mining reports in the MER. On the mining side the interesting story is the jousting for positions below Delve.

In October we can see Tribute way down the line. Esoteria is down there but not so far as Tribute.

Come November and Tribute, who was around 250B ISK a month rockets to almost 1T ISK/m in mining.  Esoteria explodes from just under 1T ISK/m to over 2.5T ISK/m displacing Deklein and taking third place. TEST Alliance is clearly working hard and working to expand its industrial complex. 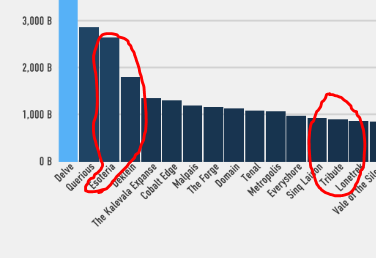 Not much changes in December except that everyone except Delve increases in ISK mined. I chalk this up to the first moons coming online to mine in this timeframe. 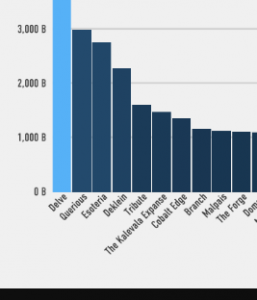 What This Tells us About EVE

EVE is too big for the playerbase of today. Delve is an industrial powerhouse. It exemplifies what EVE is or at least should be. It is packed with both industrialists and players who want to fight. More often than not players want to play a little of each. Doing one thing all the time is what makes EVE boring.

If we can cram as many people into Delve as are there today and not use it to capacity, CCP needs to get on the marketing horse and get cracking. The rise of the industrial complex is a result of two key items. The first is that the current SOV system is unplayable in its current state. This reduces the incentive for war. Yes, I know people are saying we need more scarcity to push wars. Doing so at this point would be a disaster. Having terrible SOV mechanics and introducing a mechanic that forces players to use a terrible mechanic to play equals a serious reduction in players. SOV must be fixed first in order for EVE to move forward.

It also tells us that the vision CCP laid out for a self sufficient NulllSec can be a reality, but it isn’t organic. It needs planning that only the most organized alliances can bring to the table.