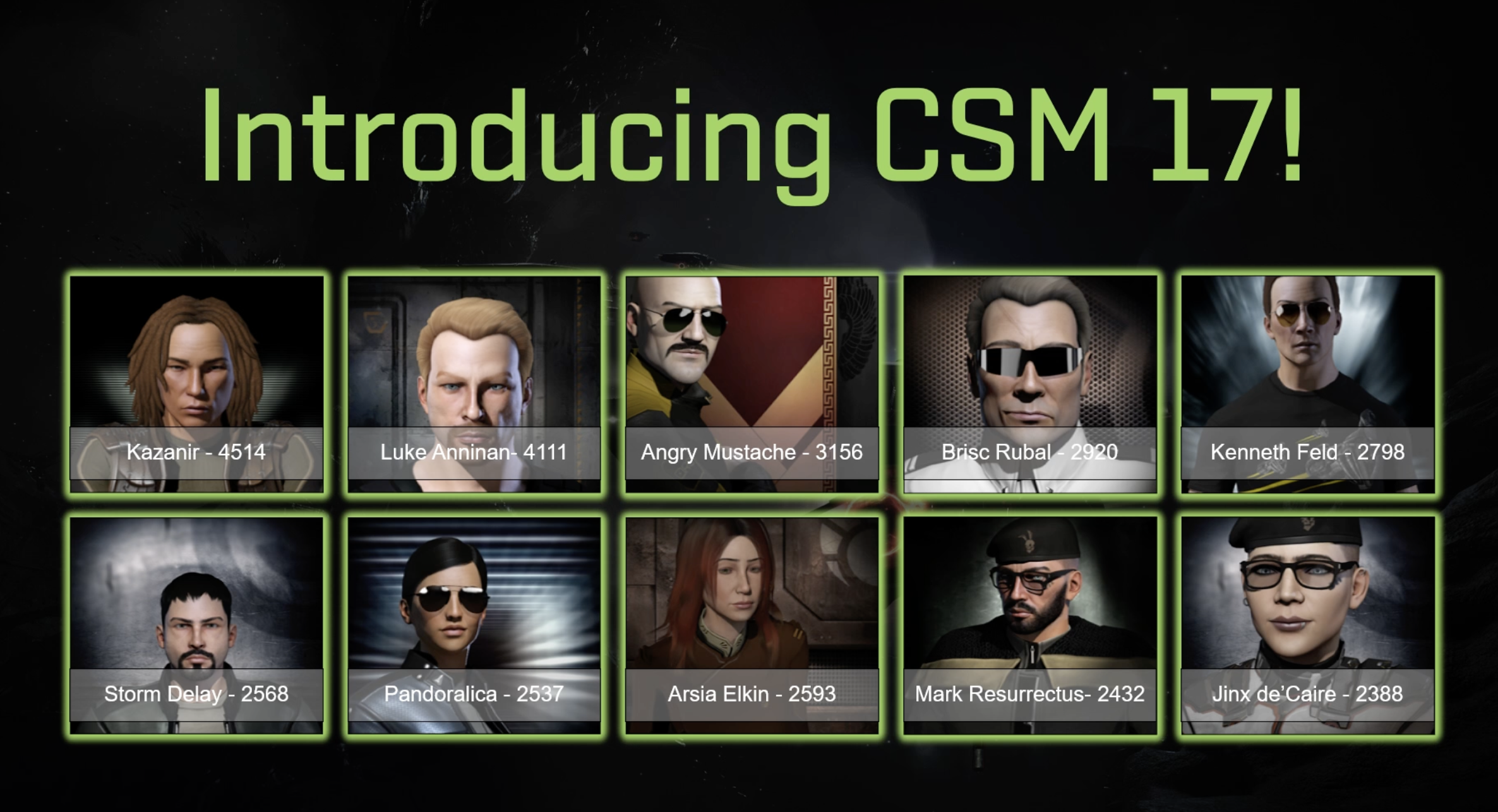 Earlier this evening, the election results for the 17th Council of Stellar Management were announced, detailing the next ten player representatives to serve a year consulting with CCP and providing player feedback on issues within EVE Online. CCP Community Team members CCP Swift and CCP Zelus took us through the voting transitions live on CCP’s Twitch channel, which was then followed up by a DevBlog announcing the final results.

This year saw a grand total of 30,814 votes cast this year, a reduction of just under 8,000 votes compared to the CSM 16 election cycle. This year’s results saw an initial election quota (per the livestream) of 2,661 votes required to be elected in the first round.

The successful candidates were, in order of election position (with number of votes acquired):

This year sees the only three incumbents who chose to run—Brisc Rubal, Kenneth Feld, and Arsia Elkin—be re-elected. Arsia Elkin, of note, wins her first CSM election, having replaced ProGodLegend as a member of CSM 16 in January 2022 when PGL stepped down.

We approached a number of the successful candidates for comment about how they felt about these results, and they had this to say:

Brisc Rubal: “Thanks to everyone who took the time to vote—given the state of the game, it’s amazing turnout was as high as it was.  I am looking forward to my final term on the CSM, and I will do my best to help get the newest members up to speed, given we have a record 8 first time CSM members on CSM 17.”

Arsia Elkin: “It was a hard fought race. I knew that I’d get a lot of votes from Torvald if I stayed ahead of him, but I was never sure of my chances until the very end. The field was really strong this year and I’m honored that people placed the trust in me that they did. I am especially happy to be able to be in the room for the upcoming faction warfare changes and help see a lot of the ideas I ran on both this year and last be implemented in an area of the game that’s needed love for a decade.”

Pandoralica: “I’m pretty proud of getting elected, but even more proud of the fact that a lot of people seem to put trust in me from all kinds of backgrounds and playstyles. I will do my best not to disappoint them. :D”

Angry Mustache: When asked for comment about how it feels to be elected to the CSM for the first time, Angry Mustache had just two words to say: “feels gravitas”. This, of course, as a reference to Twitch commentary from CCP Rattati during the Era of Scarcity.

We also spoke to Ithica Hawk, the candidate with the 11th-most votes in this election, which puts him in the unenviable position of being the first alternate should any of the new members step down.

Ithica had this to say: “CSM17 is a solid crew. I’m glad to see Mark, Pando, Brisc and Jinx on it. From interacting with them over the campaign period I think they will all do great jobs this year. Being 11th is pretty cool for my first time running. I’m very grateful for everyone who chose to vote for me and give me their support.”

Here at INN, we would like to send our congratulations to all incoming CSM 17 members, and our commiserations to everyone who missed the mark this year. We would also like to thank the seven outgoing members of CSM 16 (many of whom have served long years providing valuable feedback to CCP) for all their efforts, and wish them luck as they move on to their future EVE exploits.