CO2 Nyx down to Imperium

The pilot had safelogged on a gate in the system and had decided to log back in without having a scout, or an exit cyno, just as a fleet from Imperium were heading home after being out on a roam trying to get a fight against a CO2 Drake fleet in the area.

That roam had not been successful, but the fleet members were no doubt satisfied with the supercarrier kill that dropped into their laps on the way back to Delve, especially as the pilot appeared to be carrying a large selection of items in his hold and ship hangar, bringing the total destroyed to 49 billion ISK 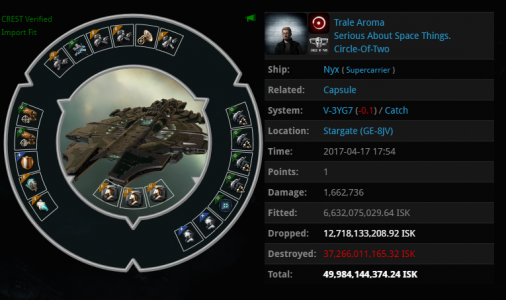