Months ago, we covered the departure of some CCP developers, among them, CCP Ytterbium. Although seeing any dev leave is sad, Ytterbium (we will stick with his CCP name) holds a special place in the hearts of EVE players, and not just because of his French accent. Over the years, he put a lot of sand into this sandbox we call home.

Ytterbium’s career appears to have started at CCP. He entered the company in 2007 as a game master and quickly worked his way up to game designer before settling into a senior position. Senior game designers lead teams that develop game mechanics.

In addition contributing to various areas of EVE gameplay, he mentored newer devs like CCP Fozzie and CCP Rise, and was well regarded by colleagues. 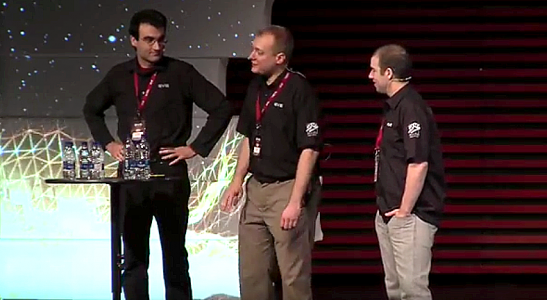 In 2009 Apocrypha expansion introduced wormholes, and a whole new Artificial Intelligence that made fighting the mysterious NPC Sleepers a departure from the regular static rats players were used to. The AI continued to evolve through Drifters and Burner Missions, which now make fighting NPCs a challenge for even the most battle-tested veterans.

Planetary Interaction, released in 2010, gave players a whole new minigame. While the routine tasks made PI a clickfest at first, it was eventually refined. The products made from planetary materials are essential for building the old and new structures. They will be in high demand for the foreseeable future.

By 2010, Incursions punctuated the “middle-era (2007-2010)” of EVE development with a final victory, ushering in high-level NPC missions with a true boss battle at the end. The players responded favorably to the game design during these years, resulting in some of the highest averages of concurrent players online, around 46,000 daily average.

All the features put into the game by Ytterbium were accessible to a variety of players, not just established PvPers. If you came to EVE with little desire to participate in fighting other players, Ytterbium probably had something to do with the mechanics that made the game attractive to you.

Ytterbium went on to spearhead the rebalancing of ships, which made Tech 1 hulls desirable again. This put many shipyards to work and incentivised individual industrialists to produce the low-requirement ships.

The restoration of a market for T1 was further enhanced by the 2014 industrial overhaul, Crius, on which Ytterbium worked along with CCP Greyscale. Loads of mechanics were redesigned to make industry conceptually understandable. The design goals were:

The redesigning of this core area captured a lot of the work done on spreadsheets outside the game and unified the process into one interface. Refining, researching, and copying were re-imagined, and a whole new industrial efficiency system was introduced, with facilities being taxed at different rates depending on activity. Before this change, station facilities for research were always full, forcing new players to figure out how to put up a lab of their own. That was no small feat and usually required many hours of study to figure out. Crius lowered the barriers of entry into industry. It also signaled a dramatic shift in game design, reducing “bad complexity.”

One Crius feature was Teams, which were written about in EVE lore. Teams were NPC scientists that would burn themselves out to help you achieve lower production costs. Although Ytterbium didn’t work on Teams they are worth mentioning as dev strategies shifted. Though the feature wasn’t used as much as CCP hoped, it was the first time a player could actively play industry. An industrialist could hunt for a temporary production center to lower costs, balancing the risk of moving materials through dangerous systems with the rewards of slashing costs. The feature was later removed; CCP presented their decision as a demonstration of their willingness to remove “bad” gameplay. Unfortunately, they replaced it with nothing. To this day, industry remains a passive game of assembling harvested materials.

Then Ytterbium tackled the player progression system. Before this, players had to rely on each other to figure out how to progress intelligently. EVEMON, a skill calculator, helped players figure out how to get into a ship with a particular set of fittings. Most, if not all, progression planning was done outside the game. If you wanted to be a miner, you needed to pick up Halada’s Complete Mining Guide to plan ahead. The combination of the Ship Tree (called ISIS at first), the certificate system, and info panel shortcuts went a long way to bring planning back into the game. You can now look at a ship and see the requirements along with how long it will take to get there. You can also see what skills are helpful beyond the requirements of the ship.

This image illustrates the game systems Ytterbium was involved with, from most recent to earliest:

In recent years, Ytterbium and his teammates took on the daunting task of reimagining structures in space. This was no easy task, since structures touch many different areas of the game: sovereignty, industry, PvP, and more. Breakthroughs in expanding the grid (visible area) and computing power made larger structures possible. First seen as NPC “listening towers,” the scale of new structures was impressive.

The goals for new structures were:

Tackling the gameplay problems of making them destructible, defendable, attainable and understandable was difficult. Structures needed to fit into existing systems, like sovereignty and security status.

Citadels, the first structures, will be out soon.

The current structures are nothing like ships; they have a their own antiquated interface and mysterious mechanics that were designed in 2004. Difficulty mining moons, defensive gunning, and basic anchoring and onlining of modules remind you why EVE was a spreadsheet-intensive game. Just getting a POS to function efficiently requires real-world paperwork. Outposts (stations) are limited to one per system. That means a system is stranded with the facility type; refining, production, offices, despite the changes in population or environment. Once an outpost is deployed, that system is locked permanently since the structures cannot be destroyed or removed. The new structures breakthrough many of those old limitations.

I came to EVE many years ago and found a living world where I could make a home. It was fulfilling to know there were greater things than me out there in the far reaches of space. Winning at EVE didn’t require much for me, just an occasional personal success was all I needed.

For some players, dominating others is how they measure winning. For others, it is in the avoidance of being dominated. For yet others, winning has nothing to do with anyone else. The mere advancement in harvesting, building, and interacting with the environment is enough for certain casual players. At times, drifting in space while listening to “On the Outskirts” and the flashes of lightning below on the surface of a storm planet can be a spiritual experience.

EVE has options for any type of player, and most of the world-building options that we take for granted were in some way connected to Ytterbium. He has been a great influence on the fabric of New Eden. His work resonates through it all: our ships, our homes, our environment, and our ability to rebuild the universe over and over again from the wreckage.

As a parting gift, Ytterbium left us with Citadels, or as he wanted to (jokingly) call them: “space chateaux.” There will be more of his work in the designs of the coming structures, so in some ways Ytterbium will be around for a few more years, represented by his work. Just like players, developers leave their mark too.

Thanks, Ytterbium. You won’t be at Fanfest this year, but we will remember you. EVE built your career as a game designer while you built EVE as a universe, for all of us. The first Keepstar should be named in your honor.

P.S. Thanks for letting us keep your partners in crime, especially CCP Nullarbor!