The first thing I do with the MER each month is to quickly run through the report and see what catches my interest, or makes me go “whoa!”.  It’s a terrible habit. Since the scale changes from month to month and any number of subjective thoughts can drop into your head while doing it. I suspect many folks do the same thing. Check out the full Monthly Economic Report for January 2018 here.

I had hoped we would see a change in the reporting of mining and see a differentiation between belt and moon mining. It’s not there yet. Mining is also still shown in isk rather than m3. I stopped moon mining once the mechanic changed but I would still like to see certain aspects of how play is changing related to the new process. The differentiation in how players are getting minerals is an important bellwether of the evolution of the game.

The first thing that stood out to me was in the Total Destroyed by Region slide. Delve was just under The Forge in total destroyed.  That is a 28% increase in total destroyed in Delve. What makes it look dramatic in the 12% decline in destruction in The Forge. Rumor has it the lack of death in The Forge may be remedied in the near future. Given that the Imperium was deployed most of last month and you can’t fix stupid this isn’t a real surprise.

Total production in both The Forge and Delve grew by 4% over the last month. Tribute made huge gains with a month over month change of 22%. I made reference to Tribute rising in the last report. The surprising information here was the decrease in production in most other regions including Deklein. For all the attempts at causing chaos in Fountain and Delve both regions seemed to have shrugged off any impact to production.

For all the hysterical drama from CCP over bounties a few months ago that resulted in knee-jerk nerfing you would think bounties would be under control. As we approach new record highs, bounties continue to rise at a pace similar to that from April 2016 through January 2017. The lack of new apoplectic Reddit posts on the matter makes one wonder if the goal all along wasn’t to just to keep players online for longer periods of time to generate like isk. 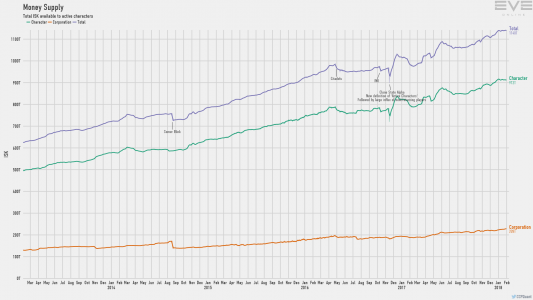 What isn’t in question is Money Supply. All-time highs every month. Delve mining drops in half due to being deployed and the Mineral Price Index (MPI) bounces back. The crash in recent months of the MPI was levelling out the effects of the rapid rise in SPPI and PPPI on the CPI month over month. Even though the SPPI has remained level the last few months it has succeeded in maintaining three-month highs.

The fact that the CPI has been rising at a good pace the last 3 quarters while the SPPI and PPPI have produced radical advances shows a clear oversupply in the market. The ability of a small group (or even one player) to have the ability to easily oversupply a market has been an issue in EVE for a long time.

Even with oversupply and MPI helping to keep things in check inflation is a big deal. Inflation has been rising, oversupply is the one thing keeping a market that shows all the key factors of being primed with tremendous inflationary pressure in check. The problem with oversupply in a market like EVE’s is that a loss of a few key suppliers can have a drastic effect over the short term.

Make no mistake, I am tempering the inflation conversation. Given CPI is not a perfect indicator of inflation for a number of reasons. It remains the best indicator we have.

If we look at CPI from a year ago we see it was about 98. We about three quarters through a deflationary period that lasted a little over a year. Today CPI stands at about 113. To calculate inflation you subtract current CPI from past and multiply by 100. 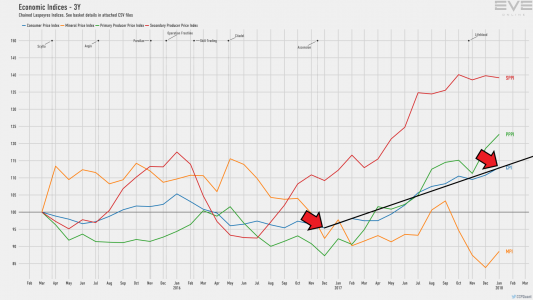 The question remains. Does EVE need a 15.3% inflation rate year over year? Conventional wisdom tells us that rapid change in economic indices is bad. If this remains the trend it is going to have a negative impact. We are due for a correction. Since CCP tweaks the mechanics that affect the market with tools more like a command economy than a free market they purport to be your mileage may vary.

Watch the MPI over the coming months. Delve dropped production last month and the MPI rose. Be careful of drawing too much of a conclusion on that connection. The injection of moon mining mechanics may have a greater impact on that. No real conclusions can be derived at this time. With the addition of moon mining in HS and WH space this month it will be a challenge to determine impact for some time.