On October 17, a news post from CCP announced the launch of the Community Fittings initiative. First mentioned by CCP Fozzie at EVE Vegas 2016, this project aims to provide curated, player-designed fits as a resource to newer players. The goal of the project is to create a catalog of fittings that a new player can access directly within the client. This aims to help players over the hurdle of being unsure of how to fit a ship and get them out in space doing things. The first threads are up here for the four Tech 1 Exploration ships (Probe, Imicus, Heron, and Magnate) as well as the Venture. Any player whose submitted fit is chosen will have their name immortalized in the description of the fit in-game. More ships will be added as the program matures.

Both in the official feedback thread and the Reddit comments for the dev blog, players have expressed concerns about this initiative. These concerns fall into two main camps; worries about who will choose the fits to be showcased, and worries about consistent updates to the fits as changes to ships, modules, and the meta as time passes. While both these concerns are valid, the parallels being drawn between this initiative and previous fitting repositories such as BattleClinic don’t hold as much weight as the proponents would like. With CCP having a direct hand in the curation of these fits, it’s hard to imagine that they would let obsolete information persist. The reference to BattleClinic did produce one funny image from Reddit poster Jebi_Vjetar, recalling the days of victim’s reaction to losing ships fit from BattleClinic. 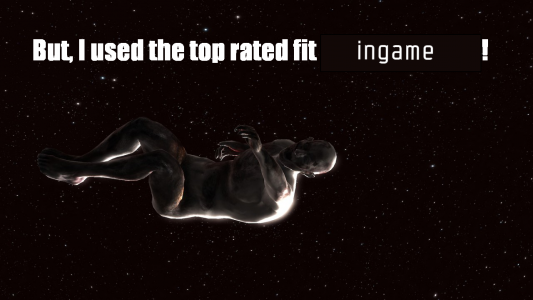 Curse this random fit from before I knew the game existed!

While we will have to wait for full implementation to see how well this project is managed, it is a good thing that CCP is taking steps to reduce the pre-flight workload and get new and returning players alike out amongst the stars.