Breaking News – Leviathan down in Aridia

Just before downtime on May 1, The Culture claimed the first titan kill of the month, exploding a White Sky Leviathan in Isid, in Aridia.

Also lost were 3  Nagalfars, 2 Moros and a Nyx from White Sky, whilst The Culture lost only a single Nagalfar. 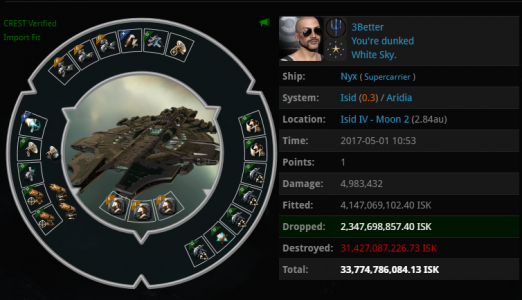 164 Billion ISK in total was lost by White Sky.

The full story is still emerging, and we will update this post as it comes in.  A video from The Culture is expected as soon as their pilots recover from the shakes.

Update: The video from TC perspective is now up