The Agency: A New Streamlined Experience

I actually get to praise CCP about the Agency! EVE Vegas saw some awesome new changes being announced for the Lifeblood expansion. There was a presentation on the latest New Player Experience that went into great detail about CCP’s plans for its new approach to the New Player experience beyond simply the NPE campaign itself. The changes mentioned in the presentation are also explained in The Agency Dev blog released on Oct 23. However, I feel that this presentation offers more color to what this new expansion has to offer.

Some of you may remember the last time when I covered the first Agency Event that CCP tried. For those of you who don’t, let’s just say I was not pleased. At all. The previous Agency “event”, was poorly implemented and poorly marketed. I was not a minority in feeling frustrated with the way the previous Agency mishap presented itself as an event that would rival or even surpass those that had come before. Instead, we got a glorified log-in incentive that did not really know what to do with itself. The bright side of that situation, however, is that CCP seems to have heard our feedback, as well as providing a new way to streamline PVE interaction.

The Vegas presentation linked in the first paragraph points out something that has me genuinely excited. CCP is starting a new approach to what “events” actually mean, as well as how they work. CCP Punkturis introduced the presentation showing the audience a graph of participation in the events. She pointed out that while events such as the Rogue Drone event had a massive spike in use at the beginning, participation later fell likely due to burnout. She also recognized that while “Welcome to the Agency,” the event I so strongly bashed in my previous article, actually did have the strongest participation out of the last several events, this had a lot more to do with the fact that there was much about the event that was able to be done accidentally. In a way, it kind of artificially inflated the numbers, due to the nature of the even being basically a glorified log-in reward system. It was encouraging to me that CCP actually did recognize that the community was not pleased with the rewards. The point of this presentation by CCP Punkturis was to point out that CCP’s goal is to provide a balance between what’s aimed at new and veteran players in the content coming down the line. To provide real quality of life improvements.

I am a bit more apprehensive about passing judgment on this new event quite yet. During the presentation, CCP Punkturis claimed that CCP said that the new Crimson Harvest event will have improved on the previous iterations based on community feedback. The points of improvement focus on making the challenges scale more effectively, while “Guaranteeing the next challenge.” She gave an example of how the challenges would start out simple and then get progressively harder over time, but with more points towards rewards.

This new system will be implemented in “The Crimson Harvest” event that will be similar to the one last year. How this improves the experience will still remain to be seen. Boosters and accelerators were mentioned as intended rewards, and the skins shown in the video (starting at 06:09 for those who want to see) looks gorgeous. The hated daily cooldown will no longer be a feature, which is encouraging. That was a major problem with the “Welcome to the Agency” event. I am choosing to be optimistic, but that very well may change. We shall see.

She also mentioned a few more events for the coming months. There will also be something called “Battleship Brawl” coming in the Winter expansion which will be meant to help celebrate the new upgrade to battleship capability that Alphas will have, which sounds fun. An event for the “Yoiul Festival,” which has my holiday happiness meter tingling. Apparently, an event called “Guardian’s Gala” that will be “romantic” in its theme and will happen around Valentine’s day, which had me curious. Coming to you in February, from the company that thinks “Killing is just a means of communication” in this game, as well as using the motto for the Citadel expansion of “Build your dreams, wreck their dreams.” will be a romantically themed event. This. This, I have to see.

Also, there will be a Capsuleer Day event in may to celebrate EVE’s birthday which promises lots of surprises. So lots to look forward to regarding events.

The New and Improved Agency Tab

The Agency icon on your Neocom is about to become a lot more useful. Basically, it will be serving the purpose of the “Agent Finder”, combining color-coded symbols on a special agent map in the tab itself, as well as bringing more information to the players about what there is to do around them. This will be the first attempt to help make agents more accessible for newer players. It has multiple tabs for combat, mining, as well as a suggested tab and a place to specify. This new set up is actually encouraging for improving the quality of life for newer players as it provides a visual representation of how far away different agents are, as well as puts as much as possible all in the same place. This new agency is the first iteration of a “one-stop shop” place to give people an idea of what there is to do around them. 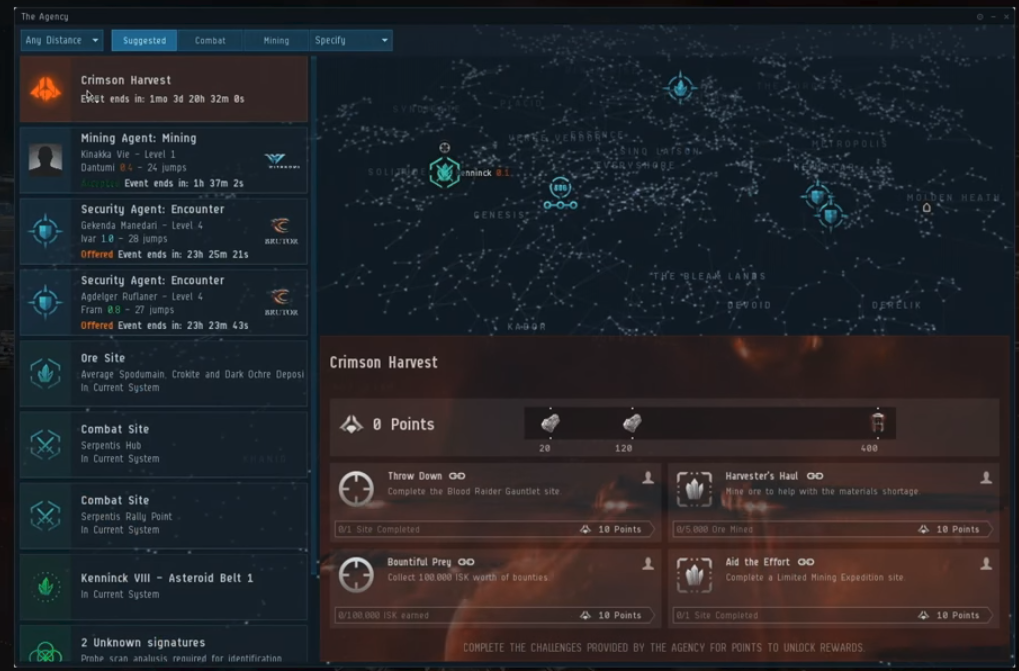 There are 12 slots that will have different content on the left, to help point out a variety of things that are available. The Specify tab has more to do with categories, but there actually is a way to find something more specific. Say if I wanted to find a level 4 Amarr Navy security agent. I would go to the Specify tab, select “agent”. Then there will be tabs open for faction, corp, type, and level. I would then select Amarr Empire, Amarr Navy, Security, and Level 4 in their respective tabs. The Agency will now show me twelve agents that fit under this selection. However, it does not allow you to search specific solar systems/regions, sec status, or locator agents. While this is an improvement for newer players, it does not automatically make the Agent finder obsolete right away. But it’s definitely a step in the right direction.

The same can be done for sites, asteroid belts, signatures, Epic Arc agents, and sites for the new “Resource Wars” feature that will be coming. The selection card has a lot of information in it. For example, if you select asteroid belts under specify, then select a specific asteroid belt, it will actually show you potential asteroids in said belt, what kind of module to use, and what kind of NPC type you should expect to potentially attack you! This is kind of information will be for all of the selected cards, including for combat sites, making it a great quality of life improvement in spite of its limitations. Just be aware that in its current form it’s designed to give you an idea of what’s around you, so it won’t provide too much on stuff like sites if you aren’t actually physically nearby.

In the Winter Release, CCP plans on doing some cleanup to the Neocom. They plan to try and fully integrate the Agent Finder tab into the Agency Tab. CCP also wants to incorporate the PVE aspects of the Journal tab into the Agency Tab. CCP also plans to add more content types to The Agency such as landmarks, ice belts, Incursions (which will be a challenge), and Factional Warfare. Hostile NPC specific damage types are also planned to be specified in the Winter expansion’s edits to The Agency, although they do not plan on giving percentages. This will still be helpful for newer players, and I am very pleased so far with where CCP is taking this.

CCP is interested in feedback from the community, and this new Agency Tab is a testament that they do actually listen. CCP expressed an interest in providing more events in the coming months, as well as making this a new staple of the years to come. I for one, am genuinely pleased that this is so different from last time. The Agency in the previous iteration seemed forced and silly. While it is obviously unfinished, what CCP has provided is a lovely template that can easily be built upon to make life easier for new and veteran players alike. Looks like the Agency is actually worthy of its title. The Agency has officially left the farm.