THIS WEEK IN SPACE

This week spacefans, we have lots of fabulous photos for you to feast your eyes upon, Enjoy! We will however start with a brief Eve Vegas announcement.

SPACE POPE TO GIVE PRESENTATION AT EVE VEGAS

Charles White, otherwise known as Max Singularity VI, (first of his name) Harbinger of Faith and Pope of New Eden, will present “Science Fiction vs Science Fact” session at Eve Vegas. ”There is an entire fleet of spacecraft in the Earth solar system exploring planets, comets, rings and other things, but very few people know about them all” he said when asked by TMC. Charles will give a brief overview of the fleet from his perspective as NASA/JPL’s Knowledge Management Specialist. 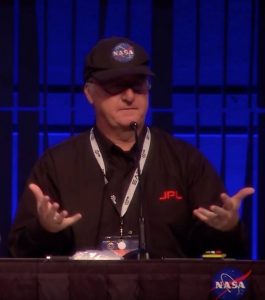 We hope all Eve Vegas attendees will go and check it out armed with curiosity and questions. Expect to be awed by his depth of knowledge and expertise.

Officially known as Messier 63, this spiral galaxy is 27 million lightyears away and belongs to the M51 Group of galaxies named after its brightest member, the Whirlpool Galaxy, so this one being dubbed the Sunflower Galaxy comes as no surprise. Its brightly shining arms are due to the hot, young blue stars that have formed in its spiral arms. It is also very pretty. 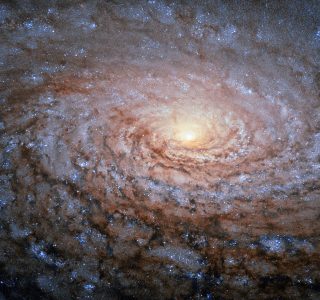 “Pluto is showing us a diversity of landforms and complexity of processes that rival anything we’ve seen in the solar system,” said New Horizons Principal Investigator Alan Stern, of the Southwest Research Institute (SwRI), Boulder, Colorado. “If an artist had painted this Pluto before our flyby, I probably would have called it over the top — but that’s what is actually there.”

“The surface of Pluto is every bit as complex as that of Mars,” said Jeff Moore, leader of the New Horizons Geology, Geophysics and Imaging (GGI) team at NASA’s Ames Research Center in Moffett Field, California. “The randomly jumbled mountains might be huge blocks of hard water ice floating within a vast, denser, softer deposit of frozen nitrogen within the region informally named Sputnik Planum.” 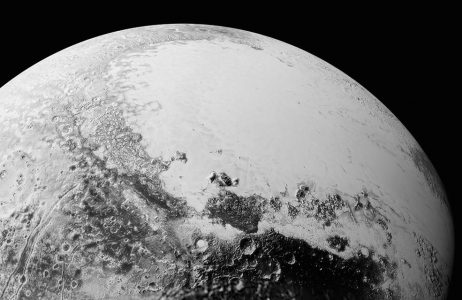 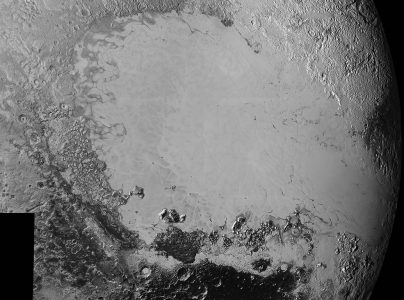 A view of Sputnik Planum, the flat white area with the whole picture about 1600km(1000 miles) wide. 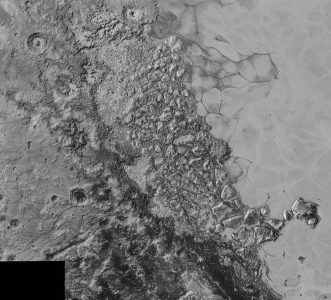 Jumbled broken terrain similar to the ‘chaos’ features on Europa. 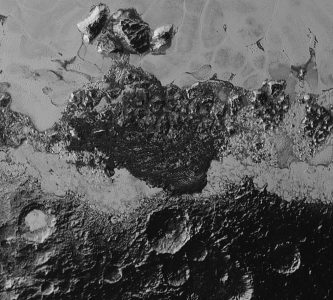 Pluto’s haze layers with the image on the right having been processed to show the fine layers.

“Seeing dunes on Pluto — if that is what they are — would be completely wild, because Pluto’s atmosphere today is so thin,” said William B. McKinnon, a GGI deputy lead from Washington University, St. Louis. “Either Pluto had a thicker atmosphere in the past, or some process we haven’t figured out is at work. It’s a head-scratcher.”

“This bonus twilight view is a wonderful gift that Pluto has handed to us,” said John Spencer, a GGI deputy lead from SwRI. “Now we can study geology in terrain that we never expected to see.”

Not to be outdone, Pluto’s moons will be in the spotlight this week with the release of more fabulous images on Friday.

The intruiging Occator crater has been shown now in greater detail by the New Dawn spacecraft. Scientists have also made a rather neat and colourful animated video to show off the topography of the crater. 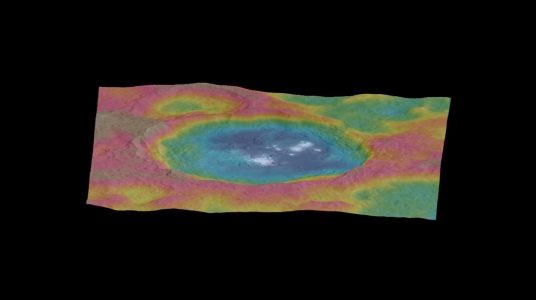 This animation, made using images taken by NASA’s Dawn spacecraft, shows Occator crater on Ceres, home to a number of mysterious bright spots.

The animation was generated using two components: images taken during Dawn’s High Altitude Mapping Orbit (HAMO) phase, where it viewed the surface at a resolution of about 450 feet (140 meters) per pixel, and a shape model generated using images that were taken during Dawn’s lower-resolution Survey phase. The image is draped over the shape model, which has been stretched by 1.5 times in the vertical direction to better illustrate its geography. In the colur picture height is delineated with blue for the lowest elevation and brown for the highest. These elevations vary about 6km(4 miles) from top to bottom. 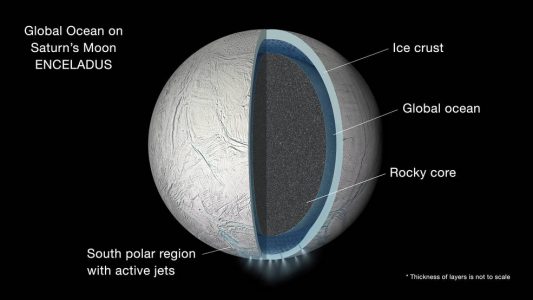 This exciting news means that we can include Enceladus which orbits Saturn, along with Europa and Ganymede, which orbit Jupiter,  in the list of moons with a confirmed liquid ocean beneath an icy shell. Enceladus has a slight wobble known as a  libration, so it oscillates in its orbit around Saturn. Its wobble is such that it can only be explained by its having an unfrozen ocean underneath the icy shell. It was initially thought that this liquid ocean was concentrated at its South pole, however this new data confirms it being global. TMC reported on this moon previously back in May so it is very satisfying to have an updated, clearer picture of its properties.

“This was a hard problem that required years of observations, and calculations involving a diverse collection of disciplines, but we are confident we finally got it right,” said Peter Thomas, a Cassini imaging team member at Cornell University, Ithaca, New York, and lead author of the paper.

“If the surface and core were rigidly connected, the core would provide so much dead weight the wobble would be far smaller than we observe it to be,” said Matthew Tiscareno, a Cassini participating scientist at the SETI Institute, Mountain View, California, and a co-author of the paper. “This proves that there must be a global layer of liquid separating the surface from the core,” he said.

It is still a mystery of how Enceladus maintains this liquid water other than surmising that tidal heating due to Saturn’s gravity must be stronger than previously thought.

“This is a major step beyond what we understood about this moon before, and it demonstrates the kind of deep-dive discoveries we can make with long-lived orbiter missions to other planets,” said co-author Carolyn Porco, Cassini imaging team lead at Space Science Institute (SSI), Boulder, Colorado, and visiting scholar at the University of California, Berkeley. “Cassini has been exemplary in this regard.”

There will be another flyby on October 28th aimed at diving through Enceladus’ icy plumes. TMC will of course be watching closely!