World of Warships: The Hidden Controls

World of Warships is a very intuitive game to anyone familiar with the recent military war-machine series or a first person shooter; it uses standard WASD controls for movement with the mouse controlling the camera, aiming, and firing. These few simple controls are enough to complete entire matches, particularly in the early tiers. However, being that the player is controlling a naval ship crewed by hundreds, if not thousands, of persons, this barely scratches the surface of all the controls a player needs to utilize to excel. While some of these less intuitive controls are covered under the F1 key’s help screen, there remain even more that are hidden away. This guide is here to help you

The biggest key to learn to use is the ALT key. Regardless of what ship class you have selected, the ALT key should be as important as your left mouse button. While some players have undoubtedly found one or two of the uses of the ALT key, still many others have been left in the dark on what it can truly do.

The most well known use for the ALT key is the distance and hang time indicator. When in a ships that has main guns, pressing ALT will bring up an estimation of distance and travel. This is incredibly useful to calculate the amount of lead you should give a target. The distance indicator will also display if the target is in range: the max distance of your guns or less will be displayed in white, while out of range distances will be shown in red. A very handy feature for those who change ships often.

While you have the ALT button depressed, another feature appears: health bars, ship names, and the names of the captains also appear on any ship within visual distance. Few things annoyed me more than not knowing my opponent’s health after trading blows at distance and not knowing his current health status. Even after closing the distance and having an analog bar appear above the ship left me wondering exactly what I was up against. The ALT key alleviates this by showing an absolute readout of the hp remaining. If this information, and the distance and hang time calculator, are something you want to keep up on the whole match, pressing the ALT key plus the Num Pad Enter will lock them on screen. 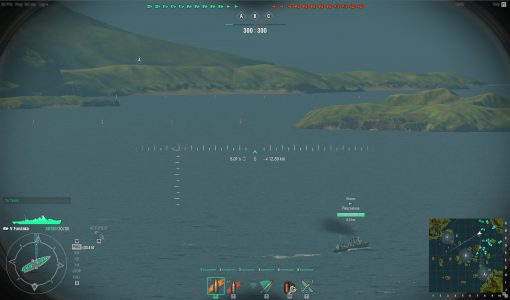 When you are the captain of a carrier, the hang time indicator and absolute readouts are less important. However, there have been many times that none of the available torpedo options have been appealing. This particular problem is felt most acutely in tight island spaces or against a destroyer. When your bombers are selected, pressing ALT will bring up a manual targeting mode, allowing your bombers to drop torpedoes or dive bombs onto a specific location instead of vehicle. This particular trick requires you to compensate for the time it takes for your bombers to reach the target, and your target’s own movement. Done properly, however, you can place one or two torpedoes immediately next to an enemy vessel without time for them to dodge. Even alert destroyers can fall victim to this attack.

The last use of the ALT key is perhaps the least well known, but absolutely lethal when used correctly. Torpedoes are equipped with two salvo firing modes that are displayed on your HUD from the beginning, using the 3 button by default to switch between them. While the narrow spread or wide spread work most of the time, there are a few times that the narrow isn’t narrow enough or wide quite as sweeping as you need. Using ALT unlocks a third mode: individual torpedo launches. Using the ALT key allows a player to snipe the Torpedoes with greater precision, or flood a lane with bubbling doom. I can appreciate why the salvo is the default, but having the individual launching as an option (albeit very buried one) is fantastic.

Unlike the ALT key that has a wide variety of uses, CTRL finds itself more in the one-trick pony category. However, it is just as important to master the Control key. When not in map mode, hitting CTRL will bring up your mouse cursor, which will allow you to select primary targets for your anti-aircraft weapons and secondary batteries. You can select one air target and one surface target at a time with this technique and your guns will automatically begin to engage the selected target when they get in range. This is incredibly useful when there are multiple targets in the air; many ships have been lost while the anti-aircraft fire focused on the fighters instead of the torpedo bombers they were escorting. Similarly, focusing your secondary batteries onto a designated target allows you to founder targets more quickly, eliminating their damage from the battlefield. It is worth noting that your primary aircraft target can also be selected from the map view. Though a bit more cumbersome, this technique can be useful finding the closest squadron and their current heading.

While not directly associated with the CTRL function, the P key will disable your secondary batteries and anti-aircraft guns. This is recommended when you are trying to stay hidden, such as behind an island or, better still, in a smoke screen. Destroyers will benefit from this stealthy trick the most, but even a cruiser or battleship might remain undetected for a crucial second or two more by being quiet. Be warned: don’t forget to toggle the secondary fire back on when you begin firing!

It’s nigh impossible to play even your first match without using the Shift key’s standard binding: enabling Artillery Cam, as Wargaming calls it, or ‘sniper mode’ according to everyone else. However, I have known few players that use it to set multiple waypoints. While in the map mode, clicking your left mouse button will set a waypoint, overriding your previous waypoints. However, Shift + LMB will allow you to set up to five waypoints. While the usefulness of this in a destroyer is questionable, it is very handy to ensure your carrier is constantly moving, while avoiding islands and hostiles (in that order). Moreover, while in a carrier, you can set multiple waypoints for your aircraft as well. This is very handy when you want to skirt the edge of the map with torpedo bombers, for example. 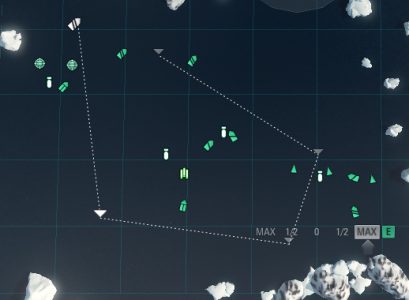 However, the magic of the shift button on carriers does not stop there. Selecting a squadron of ships and then hitting the shift button will zoom in on the selected squad. However, unlike double tapping the squad number  which will also focus the camera on them, Shift will zoom in very closely and follow them for as long as they survive. Bringing the camera back to the standard carrier view can be accomplished by pressing space, pressing shift, or going to map view. If the carrier is the selected entity when Shift is pressed, a camera view similar to the third person view on other classes of ships is enabled. This is handy when navigating tight straights like you find on some maps, or getting your carrier out of the island you ran into.

Sticking together as a group is a vital part of any match, and when your enemy inevitably follows the same strategy, your HUD can fill up quickly. Properly designating targets, focusing fire, and winning the engagement starts with communicating the primary. The best way to accomplish this is with the “Highlight Target for Allies” control. When your crosshair is placed over an enemy, pressing this button will radio for your allies to fire on your designated target and put a large red arrow above their ship. Strangely, however, this function comes out of the box unmapped. Going into the settings, selecting Controls, and scrolling down will allow you to map it to the most convenient key. I have mine mapped as G, but you should find what is comfortable for you. 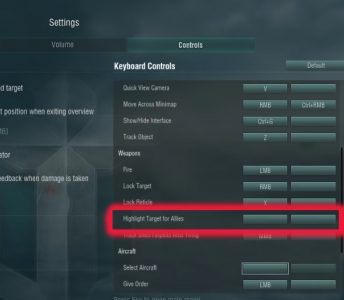 The next part of dominating the engagement is focusing your fire onto the designated primary. When the field is full of targets, it can be hard to focus on the correct target if the game has decided a different target to track. Thankfully you can cycle through the available targets with the X key to ensure you are applying damage to the unfortunate soul your team is hammering upon. Failing to do this will allow the enemy a large advantage; sinking just one of even the lowliest of ships quickly is more beneficial than spreading the damage and allowing all the ships to continue fighting.

Combining several of these keys together reveals yet another tool to add to your belt: fixing weapons. While maneuvering in World of Warships is rather intuitive, it can be overwhelming to maintain weapon orientation, dodge torpedoes and incoming fire, and not crash into an island. Thankfully, Wargaming has given us Ctrl + X and Shift + X. Shift combined with X will lock your guns onto a specific location on the map. If you anticipate ships sneaking through a narrow straight, for example, locking your guns onto the mouth of the waterway will allow you to zero in on them much more rapidly. Ctrl and X, on the other hand, locks your guns in a certain direction. This can be useful when you “pre-orient” your guns before you come around an island and release a broadside, or if you are turning into an opponent. By locking their orientation, you avoid the wandering that occurs when you spin the camera to focus on your foe. It is worth noting that the right mouse button allows a similar feature in third person. However using Ctrl + X allows all normal sight function, such as sniper mode without messing up your guns. In order to break your guns of this lock, press X. 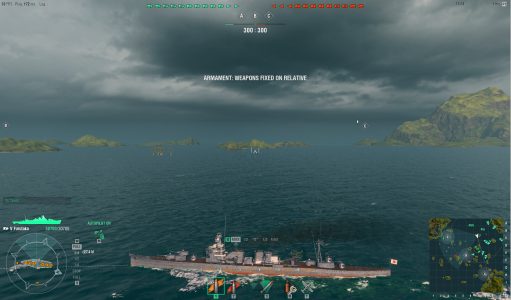 Aside from looking cool, the Z key’s shell and torpedo tracking camera can be handy to figuring out just where you’re missing. There is one last key combination that is extremely handy but doesn’t quite fit in with the others. When a carrier, sometimes you need to launch, land, or give orders to all your aircraft at once. The time honored Ctrl + A is here to help, and will allow you to synchronize your aircraft more easily. For finer control of aircraft groups, click drag will allow you to select a smaller subset of aircraft, i.e. only bombers or a bomber with fighter escort.

Although the game is still in closed beta, and as per Wargaming, not representative of the final product, we hope this this guide taught you a few new tricks to employ in World of Warships as it stands right now. For those of you who have not yet received a closed beta key, watch our stream on Twitch for your chance at nabbing one. Another option would be to head on over to the Wargaming World of Warships shop and pick up one of the exclusive preorder packs that come with an entry to the closed beta at the time of writing. For those of you in the beta, feel free to share your custom keybinds and any tricks we’ve missed in the comments section.