Who is Max Singularity?

The Space Pope, Max Singularity, has become a household name among players of EVE Online. I had the opportunity to talk with Max for the first time in depth a few weeks ago on the Whiskey Gaming Show. Max is an energetic and enigmatic person. He is a joy to talk to. His zest for life is infectious and conversations with him seem to lift the burden of your day away.

The Sixth Empire started in 2015 at a role play table. Dressed as the Space Pope Max brought forward that Jamyl Sarum was a danger to the Empire. His reason? The drifters had arrived in response to Jamyl going into Worm Hole space to loot the bodies of Sleepers for implants for DUST players.

The charge he made was viable and Amarrian role players were all up in arms.  Max had put together in a reasoned way the method Jamyl Sarum had stolen the Amarr Empire and had eliminated the Leadership Council by killing them. Unbridled hysteria ensued.

Later that evening, by happenstance The Mittani kissed the Space Pope’s ring. Much of what happened later under the influence of a few adult beverages just played into the hand of the story line that was taking shape.

By that time Goonswarm, still under the banner of the CFC, had decided Providence was the next target. One that would test some theories about the new FozzieSOV game mechanics. Max pointed out that this was home to the Jamylites, those who supported Jamyl as Empress of the Amarr Empire. They needed to be purged.

The Mittani declared Max Singularity, Sixth of His Name, the true Amarr Emperor. Thus, the Sixth Empire Alliance was born. The Sixth Empire is the Capsuleers after the first five races: the Amarr, Caldari, Gallente, Minmatar and the Jove.

They had a lot of fun with the whole story line. Eventually, CCP had an in-game event where Jamyl undocked her titan in high-sec. Jamyl even had a conversation with Max. During the event she yellow boxed Max and his ship. This marked the first time in the history of EVE a titan in high-sec had yellow boxed a player. It turned out that CCP had not put any Dev hacks in place to prevent Jamyl from being Concorded had she fired on Max. What a funny twist to the story line that would have been.

The Sixth Empire and Elite PVP

Max directed me to this quote on their website.

“Our PVP is not the normal PVP. Since we are not a ‘power’ alliance, we don’t fly fleets for our killboards, or elite status, and taking SOV. We fly for fun. We fly for laughs. We die in fires and grade each other how well we died.  If this is a problem, don’t join Sixth Empire.”

Max has been around the Universe in EVE. He wants the Sixth Empire to be fun for members.

The most telling part of the interview for me is when he finished his answer with this statement.  “It’s 99% the people and 1% the electronic pixels.”

The Sixth Empire even made this video that expresses everything it is.

Max is right. EVE like no other game is more about the people than the game. Much of the player base uses the game to keep in touch with friends they have made. The people keep them coming back. A watering hole in the virtual world around which we gather.

One of the things the Sixth Empire does is pay tribute to the capsuleers who have fallen. They do this by lighting candles and placing them on the EVE monument in Reykjavik, Iceland and by producing a tribute video each year.  If you know of a capsuleer for whom the cyno has been lit contact Max or someone from the Sixth Empire to have them included in the tribute video this year.

“We measure our wealth in exotic dancers.” – Max Ammaria

I don’t have any more to add here. I have to dry my eyes that was so touching.

This whole interview with Max was like being at your favorite pub with a friend talking about life.

Max went on, “One of the best times I had was during the Hulkageddon. I took an alt and put him in Hulkageddon, and we all got in noob ships, and we decided to take out a hulk in noob ships. So, we had 22 noob ships and we attacked a hulk and we found out you needed 26.”  he went on telling me how they then got a few more friends and took out the hulk to a riotous laughter in comms.

He went on, “We were just flying noob ships trying to do the impossible.”

Another of Max’s favorite moments in EVE was when The Mittani gifted M-SRKS to the Sixth Empire.

“The whole corp. We were just sitting there. Everybody’s making the pilgrimage out there.” 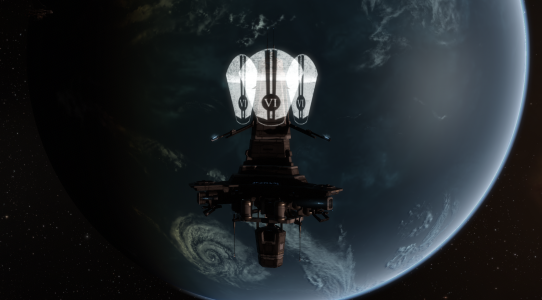 Sitting in the command chair of his new Keepstar donated by Seleene and MC. Watching the carriers and supers come in a dock and fly away.

Here is where I found another soul in this world who was a Babylon 5 fan. Max said he envisions his new Keepstar much like the iconic space station known as Babylon 5 was to the series. A place where people of all races and colors (grey, red or blue) can meet.  He sees future summits and peace accords and maybe even a battle or two in its future.

The Sixth Empire does so much for EVE community. From the tributes to the fallen to the working with those in EVE who have just not fit in with other groups for one reason or another. It’s our discussion of them being like the Coast Guard here in the US.  Always ready at a moment’s notice to render aid and assistance to those in distress long our coastal waters.

Max was in Norway when the whole Olivia debacle went down.  In one of his response videos, he said, “Olivia, might be fake but there are other Olivia’s out there, and Broadcast for Reps is always out there too. It is better to have a Coast Guard that answers false calls for help than to have someone lost at sea and there is no help coming.”

You can think it a noble cause or effort for them to do this. I call it just being human. We can all shoot and scam and act rowdy to each other in this game. But when you notice something is not quite right or your friend isn’t responding like you think they should to a good ribbing on comms. Just maybe it’s time to ask if there is anything they need to talk about. If you’re not there the Sixth Empire is.

In life, there are certain people that you know right away are true people. Some here in the US use the phrase, “He’s good people.” Salt of the earth type. Well-grounded and the like. I have only talked to Max a few times, but I can tell you all those and more describe him. He has an infectious happiness about him. He is proud of things he does and has done but not in a boastful way.

Max Singularity is a person who draws you into his world with his infectious laugh and the way he tells his story. Max knows how to have fun.

If you ever have the chance to sit and talk with him I encourage you to do so. You will find the entire conversation brings a smile to your face and a little bit of happiness to your life.