Yesterday, Reddit was made aware of a new and interesting exploit within the Faction Warfare (FW) gameplay mechanics. It appears that FW Ihubs were not being counted as structures when anchoring Upwell structures in space. 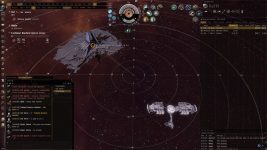 As you can see from the photo, Tikktokk, has managed to anchor this citadel at 0km from the FW Ihub. Obviously, the ability to anchor a powerful structure capable of housing and defending players, to say nothing of the actual weapons on the larger versions, could effectively make the Ihub invulnerable to anything other than an overwhelming force capable of destroying both Ihub and the citadel simultaneously.

CCP, in the design of structures, made it clear that no Upwell structure “should” be anchorable within 1000KM of any other structure (player or in-game). Speculation is that this was tested on Ihubs in null sec but never on the Ihubs in lowsec. The difference being that Ihubs in Nulsec are player structures, whereas Ihubs in FW space are NPC faction structures. The speculation from Reddit is that the oversight is likely related to legacy code of some kind and clearly has nothing to do with neglect of the FW mechanics writ large.

CCP Falcon issued a response in near record time surprising many within the FW community who often feel overlooked when it comes to their concerns.

This was never intended to be permitted, and will be fixed in early January.

Until this is fixed, it will be considered an exploit to anchor an Upwell Structure within 1000km proximity of a Factional Warfare IHUB.

With the announcement of official exploit status, any new structures that go up will open the player or players anchoring said structure vulnerable to official sanction and banning. Whereas, those structures that were put out in space (based on Tikktokk’s post) to expose the flaw in the mechanics must be taken down. CCP has taken the extra step of having the owners communicate with GM’s to take them down in a way that doesn’t advertise to potential structure thieves that the structures are ready to scoop.